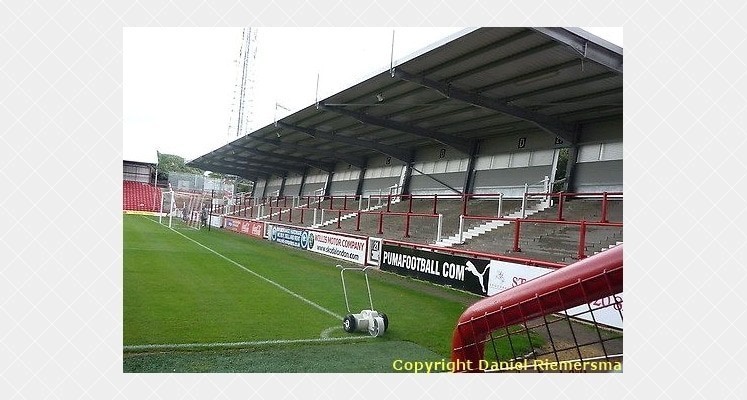 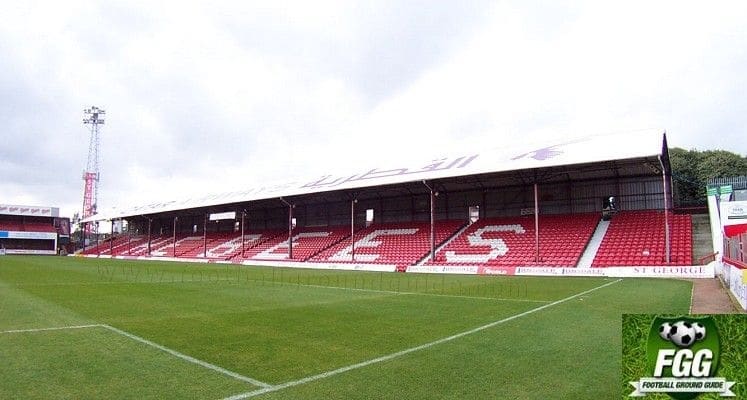 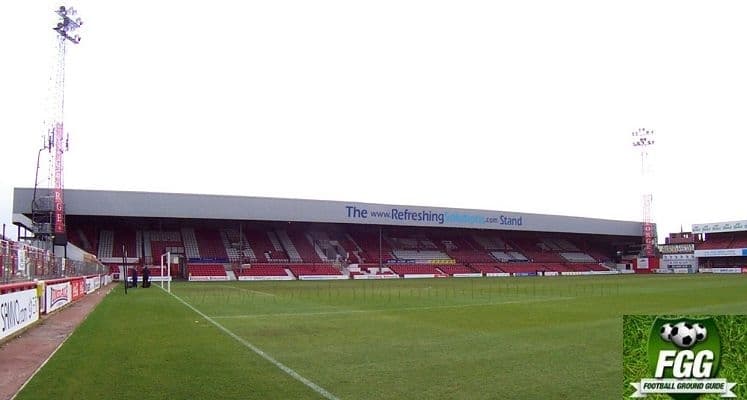 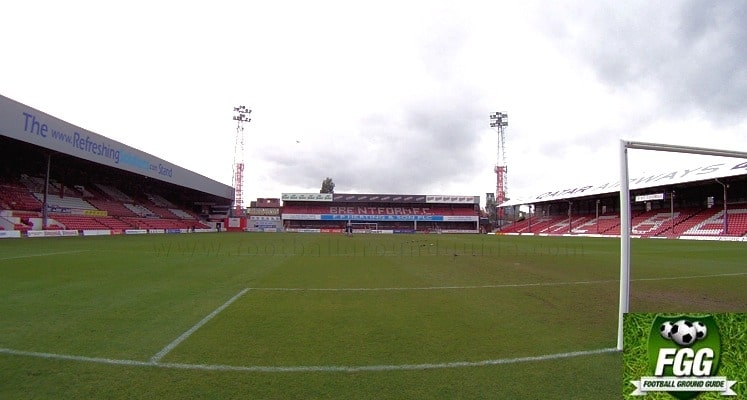 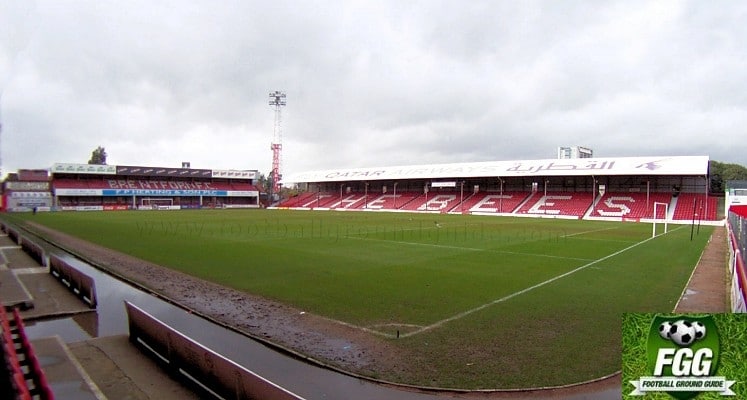 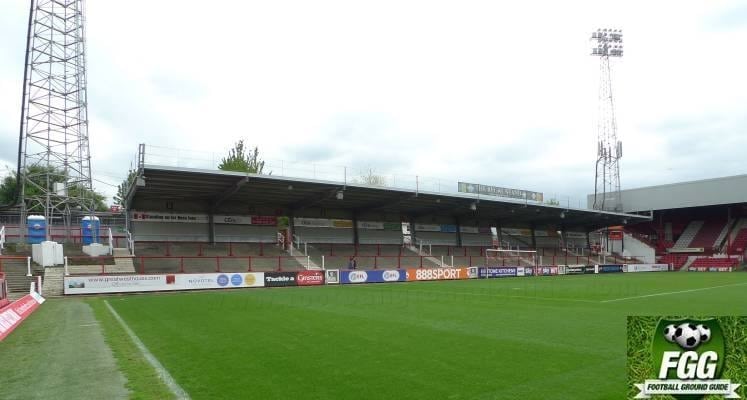 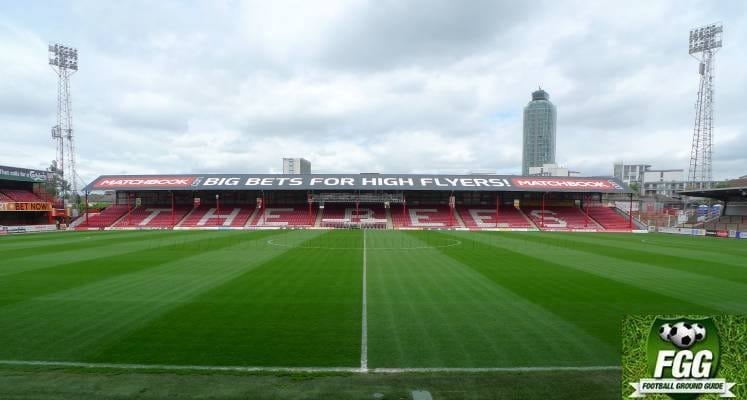 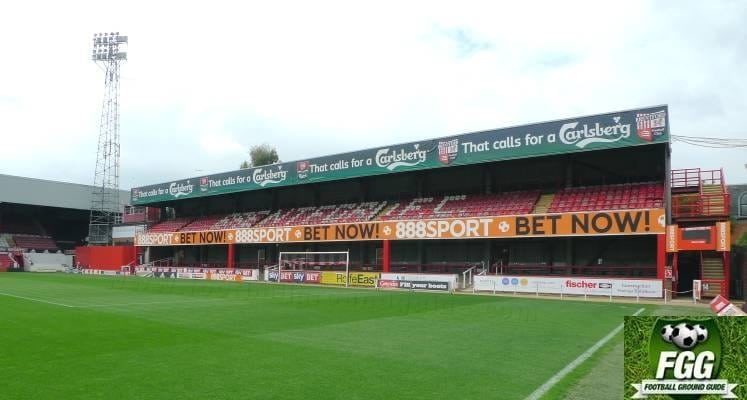 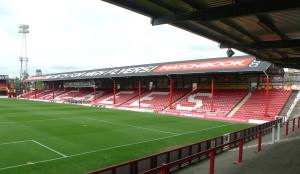 Although the tall classic floodlights can be seen from some distance away the stands at Griffin Park are almost obscured by surrounding houses, until you are almost right outside them. On one side is the Bill Axbey Stand, which is named after a long time supporter who watched the Bees for an incredible 89 years before passing away in 2007. This stand is a single tiered, covered all seated stand, which has a number of supporting pillars running across the front of it. The roof of the stand is painted with a large advert, designed to catch the eye of passengers flying into Heathrow Airport. The opposite is the Bees United (Braemar Road) Stand. Again this stand is single tiered, all seated and has a number of supporting pillars. It has a very low roof, which makes you wonder what the view would be like from the very back row of the stand.

At one end is the BIAS Stand (aka the Ealing Road Terrace), which up to 2007, was an open terrace that was given to away supporters. However, the Club decided to erect a roof on this end and give it back to the home fans, which has helped boost the atmosphere within the stadium. Interestingly the sponsors of the terrace BIAS are not a company but the Brentford Independent Association of Supporters. Opposite is the Brook Road Stand. This stand which was opened in 1986, is a strange affair; a small double-decker stand that has seating on the first tier and terracing below. It is known affectionately by the Brentford fans as the ‘Wendy House’. The ground is complete with a set of four imposing floodlights. Griffin Park is also used for Chelsea reserve team matches.

The Club are building of a new 17,800 capacity stadium, on a site at Lionel Road, which is located in-between Kew Bridge Railway Station and the M4, around one mile from Griffin Park). The new stadium is expected to be open for the start of the 2020/21 season and will be shared with London Irish Rugby Club.

Works look to be progressing well on the new stadium and it looks well on course to be ready for the Club to kick off the new season in August next year. The video below (courtesy of the Brentford FC Drone and made publicly available via YouTube) has some great footage of the new stadium, both inside and out.

Drone Footage Of The New Stadium Away fans are housed in the Brook Road Stand at one end of the ground. This covered two-tiered stand has 600 seats in its upper tier and room for around 1,000 fans below on the terrace. The upper tier has good unhindered views of the playing area, whilst below in the lower terraced area, there are a couple of prominent supporting pillars, which may affect your view. The leg room in the upper tier is tight, as you would expect from an older ground. Whilst the lower terrace is quite small and compact being around 12 rows high. Also, the roof of the upper tier angles down quite low above the lower tier, but it does help in keeping the acoustics of this stand good.

There is a good selection of refreshments on offer including a selection of Pies (£3.50), Pasties (£3), Jumbo Hot Dogs (£4), Cheeseburgers (£3.70), Burgers (£3.60) and Sausage Rolls (£2.20). I also have been informed that an enterprising homeowner has set up a hot dog and cake stall in their front garden on Brook Road South, just along from the away supporters entrance.

Tim Porter a visiting Torquay United supporter adds; ‘The home fans were the most friendly I’ve come across for a long time – before kick-off, the stadium announcer asked all the home fans to put their hands together for the Torquay fans who had made such a long journey. I expected indifferent silence or abuse, but there was almost universal clapping!’ I also had an enjoyable visit to Griffin Park and didn’t experience any problems. Brentford is famous for being the only ground in England that has a pub at every corner. The surrounding land was formerly owned by the Griffin Brewery, hence the name Griffin Park. These four pubs are; The Griffin (which serves Fullers real ale), Princess Royal, The Royal Oak (also called the Fourth Corner) and The New Inn. The New Inn is the favoured pub for away supporters and serves beers from Young’s Brewery. Derek Hall a visiting Hartlepool United fan adds; ‘Probably the best pub out of the four is the Griffin, with the New Inn a fairly close second, although this was packed on our visit’.

Roger Stamp informs me; ‘Probably the best real ale pub in Brentford is the ‘Magpie & Crown’ which is only ten minutes walk away from the ground, on Brentford High Street. The pub has four real ales on tap and welcomes both home and away supporters’. This pub is listed in the CAMRA Good Beer Guide.

Andrew a visiting Reading fan adds; ‘We found a lovely pub down Brentford High Street street called the Six Bells. The staff were friendly and most helpful. They have 10 keg beers on and two real ales, half of which I had never seen before. They were amazing. The pub is a 10/15 minute walk away from Griffin Park’.

Please note that alcohol is NOT available for away fans to purchase inside the stadium.

Leave the M4 at junction 2 and take the A4, going around the Chiswick Roundabout so that you end up coming back on yourself. Continue along the A4 and at the first roundabout take a left onto the B455 (Ealing Road). The ground is located about half a mile down this road on your right. There is no parking at the ground for supporters. Plus there is a residents only parking scheme in operation on roads near Griffin Park, so please pay attention to the small parking information signs. Some roads in the area (such as Somerset Road, which is off the A3002 Boston Manor Road) do also allow pay and display parking at a cost of £1 for 30 minutes, so you would be looking at a cost of £6 for three hours. Although some (check the signage to make sure) are free after 6.30pm on weekday evenings. There is also the option of renting a private driveway near Griffin Park via YourParkingSpace.co.uk.

Brentford Railway Station is around a five minute walk away from Griffin Park. This station is chiefly served by trains from London Waterloo, which normally has services running every 15 minutes on Saturday afternoons. To get from the station to the ground, exit onto Station Road. Take the first right into Orchard Road, right again into Windmill Road and then first left into Hamilton Road which leads into New Road and the ground.

Caleb Johnstone-Cowan informs me; ‘The nearest Underground Station to the ground is South Ealing, which is on the Piccadilly Line. This tube station is around a 15 minute walk from the ground, down Ealing Road’. Mick Hubbard adds; ‘Finding the ground is easy enough though – you simply turn right out of the tube station and just go straight down Ealing Road, then taking your life in your hands to cross the A4 at the bottom! Otherwise, as you come out of the station cross over to the other side of Ealing Road and catch a number 65 bus down to the ground.’

Brentford operate a category system for ticket prices (A & B) whereby the most popular matches cost more to watch. Category A prices are shown below with Category B prices in brackets.

* Please note that these ticket prices are for tickets purchased at least one week before the game. Tickets bought thereafter will cost £5 more per Adult ticket (Excludes Family Tickets).

The Club also offer Family Tickets at Grade B prices for adults (all fixtures) and just £5 for Students and £1 Under 18’s. In addition home Supporters who become club members can get a discount of £5 on home match prices.

If you require hotel accommodation in London then first try a hotel booking service provided by Booking.com. They offer all types of accommodation to suit all tastes and pockets from; Budget Hotels, Traditional Bed & Breakfast establishments to Five Star Hotels and Serviced Apartments. Plus their booking system is straightforward and easy to use. Just input the dates below that you wish to stay and then select from the map the hotel of interest to get more information. The map is centered to the football ground. However, you can drag the map around or click on +/- to reveal more hotels in the City Centre or further afield. 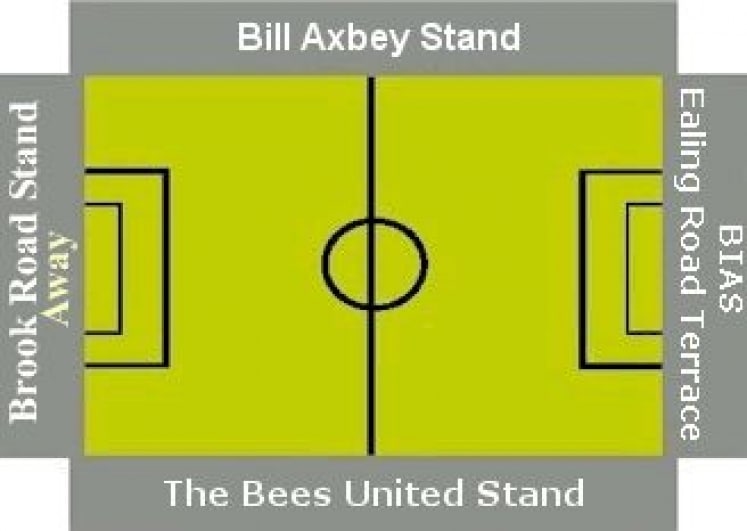