The club have been talking about moving to a new stadium for some time now and hence investment in Kenilworth Road in recent years has been neglected. One side of the ground and one end are small and covered. A Luton fan once told me that the council would not let the club build any higher than the surrounding houses. The small end, The Oak Stand, is given to away supporters (although depending on numbers it is sometimes shared with home fans) and this has a simple electric scoreboard on its roof. The other end is a large covered all seated stand, which was originally a terrace. The small side of the ground (called the Bobbers Stand as entrance once cost a Bob!) is predominantly filled with a row of executive boxes and is so small that you can clearly see the houses behind it. Netting has been suspended between the floodlight pylons on its roof to reduce the number of footballs being kicked out of the ground.

The other side, the Main Stand, is an older two-tiered covered stand. This stand is mostly wooden and is really beginning to show its age, which is not surprising at the central part of the stand dates back to 1922. This Main Stand only runs around two-thirds of the length of the pitch with another more recent structure ‘bolted’ onto one end. This area is known as the ‘David Preece Stand’ (after a former player) was opened in 1991 and is used as a family area. An odd feature are the location of the dugouts which are opposite the players tunnel, resulting in quite a procession across the pitch. Also, you will notice that rather than having floodlight pylons at each corner of the ground, as most older grounds have, they are instead featured along each side of the ground. This is a legacy of simply when floodlights were first installed at Kenilworth Road in the 1950’s, there was no room in the corners of the ground to incorporate floodlight pylons and hence they had to be installed along the sides.

In January 2019 the club received planning permission to build a new 17,500 capacity stadium (with an option to increase to 22,500 at a later date), at a site known as Power Court, which is located near to Luton Railway Station. This is great news as previous proposals for a new ground were to be for an out of town location near Junction 10 of the M1. Instead the local Council have also approved to develop this site near the M1, as a Hotel and Retail Park. Called Newlands Park, the development will help pay for the new Luton Town Stadium. The final hurdle may still appear in the form of local objections to the use of the greenfield site for the Newlands Park development and that could spark a judicial review and referral to the Secretary Of State for a final decision. Still the Club have now taken major strides forward and if everything goes to plan, then they could be kicking off in their new home in a few years time.

Below is an artists impression of how the new stadium will look. This plus lots more information can be found on the 2020 Developments website.

Away fans are housed on one side of the Oak Road Stand (on the Executive Stand side) at one end of the ground. Around 1,000 fans can be accommodated in this area. This covered all-seated stand is shared with home supporters with an area of tarpaulin, keeping the fans apart.

The acoustics of this stand are very good and with Luton fans in close proximity, this makes for a good atmosphere. On the downside, there always seems to be a large Police presence, which seems unnecessary for the majority of games, although the Club stewards themselves seemed pretty relaxed. Also, there are a number of supporting pillars in this stand, which may hinder your view. The leg room is tight (although I noted that away fans stood throughout on my last visit) and the toilets have seen better days. The refreshment kiosk is also small and may account for the limited choice of food on sale.

Kev Steptoe adds; ‘There is a great fish and chip shop located five minutes walk away from the ground. Coming out of the away end onto Oak Road, turn left and head up the hill. Turn left, keeping the ground on your left onto Clifton Road. Follow the road over the bridge and the Chip Shop is on the left’.

The entrance to the Oak Stand must be one of the most unusual in the country. After going down a rather small alleyway at the side of the stadium (or down the cordoned off Oak Road), the impression is of queuing to go into someone’s house and then through their back garden and into the stand!

Just inside the away turnstiles, is located a small bar, which serves both draught and bottled beers. Although fairly simple looking inside and with no seating, it serves its purpose. You can also purchase hot pies inside the bar (£3.50) and there is one small television showing the early kick off.

Mick O’Sullivan adds; ‘A good place to drink is the Beech Hill Conservative Club on Leagrave Road, which welcomes both home and away supporters. To find the club, with the away entrance in front of you turn left and walk down to the bottom of Oak Road. Proceed through the small arcade of shops opposite and you will see the sign for the club between two shops. It has a large car park (which costs £4) and offers reasonably priced beer. You will be charged to go in, but you make it up on the cheaper than pub beer’.

Not far from the Railway Station on High Town Road is the Bricklayers Arms. David Crossfield a visiting Barnsley fan informs me; ‘The Bricklayers Arms is a proper old fashioned type pub. Six real ales at reasonable prices. It is a friendly pub with a mixture of home and away fans. Two rooms, each with Sky Sports TV’. However, for some high profile matches the pub becomes home fans only. The pub is also listed in the CAMRA Good Beer Guide. Also in the town centre there are a number of pubs including a Wetherspoons outlet on Bridge Street called the White House.

Leave the M1 at Junction 11 and take the A505 towards Luton. Go through one set of traffic lights and at the 1st roundabout, turn right into Chaul End Lane. At the next roundabout turn left into Hatters Way, whilst continuing down Hatters Way the ground will be seen on your left, although it is not accessible from this road. At the end of Hatters Way turn left and start looking for street parking from here on (the ground will now be on your left). Please note that there is a residents only parking scheme in operation near to the ground, so you will have to travel a little further away to find street parking. You can also park at Beech Hill Conservative Club (LU4 8HZ) at a cost of £5 (payable inside the Club, or you can by phone at a cost of £6). Otherwise, there is a large multi-storey car park at Luton Railway Station which costs £2.80 for the day on Saturdays. The Kenilworth Road ground is signposted from the station.

Thanks to Roger Butler for providing the directions above.

Luton played their home games at Dallow Road immediately after their formation but within a couple of years they’d moved to a ground on Dunstable Road. Dunstable Road was the recognised Luton stadium for 18 years and, in 1905, came the move to Kenilworth. The first big renovation of the stadium came in the 1920s after a fire. By the late thirties, attendances were on the up and a expansion followed taking the capacity of Kenilworth Road up to 30,000. 20 years later, another rebuild followed but then money became an issue and the stadium deteriorated. The seventies, eighties and nineties all saw considerable changes as the club moved with the times to being in seating. The latest change came in 2005.

Luton Railway Station is a good 15 minutes walk away from the Kenilworth Road ground. Turn right out of the railway station and proceed along Station Road. Go straight across at the traffic lights into Mill Street. On reaching a junction where the road bends to the right, turn left at this junction into New Bedford Road. Then turn right into Collingdon Street. At the end of Collingdon Street you will reach a dual carriageway. Turn left alongside the road and follow the pedestrian walkway and then bear right to go along the footbridge over the busy road. As footbridge passes over the roundabout it splits into two. Bear right and this will lead you down into Dunstable Road. Continue straight along Dunstable Road and then take the 5th left hand turn into Oak Road for the visitors turnstiles.

Thanks to Colin Bowles for providing the directions above.

The Club operates a category system (A, B & C) for the pricing of match tickets, whereby the most popular games (Category A) cost more to watch:

Official Programme: £3 (away fans purchase them from inside the ground, from sellers on the pitch perimeter).

The Beds-Herts derby have been taking place for nearly 140 years now with the first meeting coming in 1885 after Luton were formed. For 50 or so years, Watford and Luton faced off on a regular basis in the lower leagues and with just a short stretch of M1 between them it’s not a surprise to learn that things could get heated. Jump forward another three or four decades and the animosity really flared up as the clubs met in the higher divisions. The rivalry remains spicy to this day.

* This record was subsequently equalled against Sunderland on 6th May 2007.

Special thanks to Owen Pavey for providing the external photo of the Kenilworth Road End. 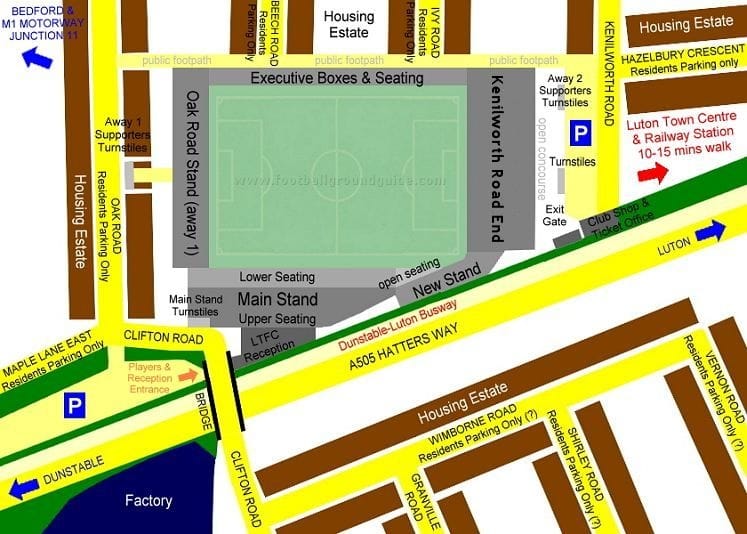