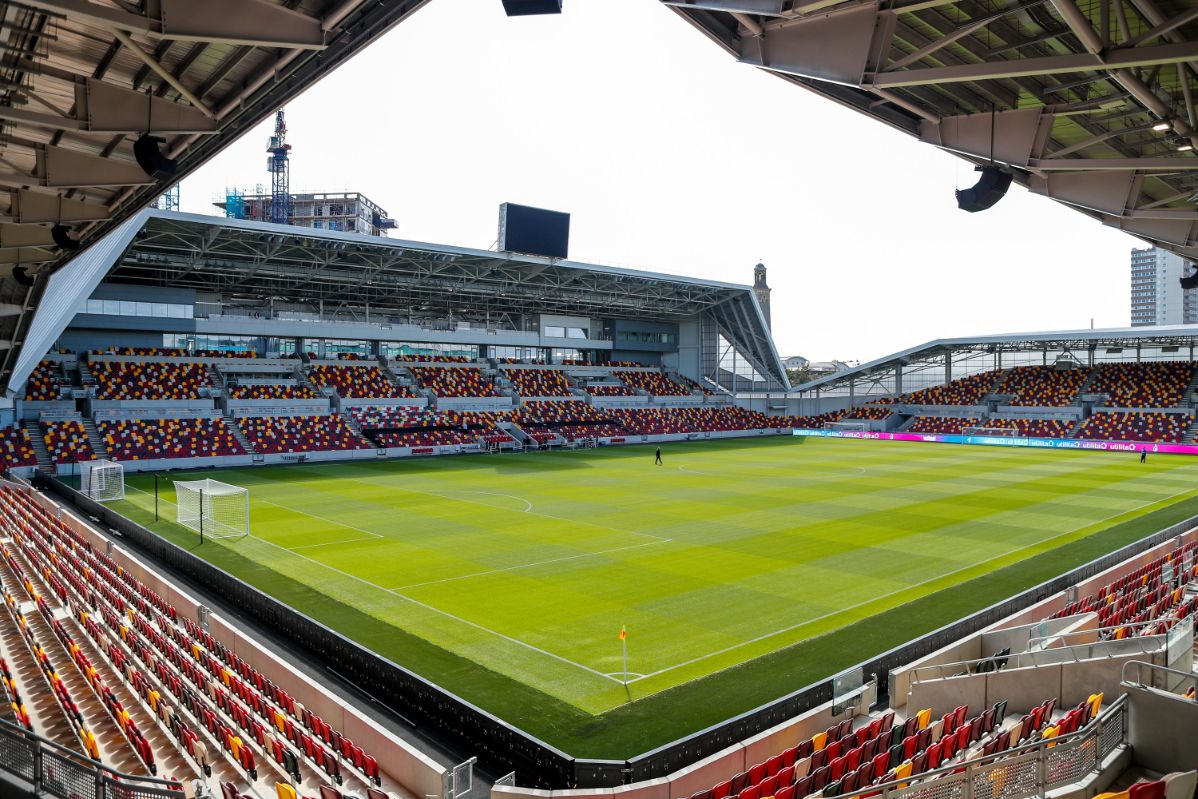 The new Brentford stadium, which is named Brentford Community Stadium, is the new ground which serves as the home of Brentford football club. After having played at the Griffin Park since 1904, Brentford made the switch in 2020 and they were finally able to execute a plan that had been in development since 2002. The ground has four distinct stands – South, North, West, and East.

The premium seats, dugouts, and media seats are available on the south stand. The family area is located in the North stand, while the hard-core supporters can be seen on the West stand. The south-east corner of the eastern stand will also host the Brentford supporters. The hospitality facilities provided in this new ground are built to modern standards.

As an away fan visiting Brentford’s ground, you will find yourself seated in the East Stand of the Brentford Community Stadium. You will not completely occupy the stand, as only a small section will be devoted to the visitors. There are premium seating options which are available on an individual or monthly basis. The premium seating option can be picked up for £44/match, while it costs £99/month for a seat.

For those trying to get to the Brentford Community Stadium, the best bet would be to use the M1 or M40. This will take you to close proximity of Brentford’s stadium for those coming from the north. If you are heading to the stadium from the south, then you need to take the A4. One should remember that taking a taxi in London is going to be an expensive affair. It could cost anywhere around £50 for a from the London Heathrow airport, which is only 8 miles away. For those taking their own car to the ground, parking is not very convenient since London is limited in terms of parking spaces.

The train or metro is a great option to reach the ground, as it is only 100 meters away from the Kew Bridge Station. Brentford’s ground is also connected very well to the London Underground system, as it is close to the Chiswick Park, Gunnersbury, and Acton Town stations. The ground is also served very well with a range of bus routes. The ground is also not far away from the Brentford stadium, which is about a mile away. The likes of the Kew Gardens station and Gunnersbury stadium are also located close by.

The pricing of tickets at the Brentford Community Stadium is based on the various grades on offer. For the grade A, fans can expect to pay around £30 for the most expensive adult ticket without a membership and £24 for members. The Grade A tickets can also be for as low as £25 without a membership and £19 for members. The Grade B tickets will range in price from £23 to £28 for non-members, where members will be anywhere between £17 to £22. The family grade ticket goes for £20 for a non-member and £15 for a member.

You can check out the ticket options in more detail via the Brentford website.

When visiting Brentford’s ground, the Brentford Community Stadium, it’s only natural to want a small memento of your day. The obvious choice is an official programme, which will set you back £4. That said, you’ll find a couple of fanzines available too:

Brentford Fulham rivalry: The biggest rivalry the Brentford Community Stadium sees is when Fulham come to visit. The two London sides battle it out with local pride on the line.

Brentford QPR rivalry: You’d expect this match to be more ferocious than the Fulham rivalry but, for some reason, it’s not. Again, both these clubs are London based but that only tells part of the story. Back in the Sixties, QPR wanted to buy out Brentford in a move that would have banished the ‘real Brentford’ out of the league.

Brentford Fixture List (redirects you to the BBC site)

As you may expect with a newly developed ground, Brentford’s stadium provides disabled supporters with good access and unlimited car parking facilities in the bays. The Brentford ground is completely accessible on a wheelchair. The ambulant seats and wheelchair spaces are seen throughout the ground. Disabled fans will also be able to get special access to toilets, which are located only 40 meters away from the viewing platforms.

Brentford has not yet opened tours of the new stadium. However, it is fair to expect that the tours will be available soon rather than later.

When you think about Brentford’s ground, you immediately go to one of two places; that’s the current stadium – the Brentford Community stadium – or their prior ground – Griffin Park. There have, however, been five other homes for the Bees. Admittedly, they all came in 15 year period in the early days. The names of you were wondering are Clifden Road, Benns Field, Shotters Field, Cross Road and Boston Park.

We won’t look back at them in any greater detail. Griffin Park though was Brentford’s stadium for 116 years; it was famed amongst fans for the fact it had a pub at each corner. No other stadium can claim that. On opening, Griffin Park, could hold 20,000 fans. By the thirties it had undergone such development that the New Road stand could hold that by itself. Things remained fairly static from that point on with the ground holding 38,000 people – although the great fire of Brentford in 1983 needs to be mentioned. It wasn’t until 2006 that all four stands had roofs and, as Premier League football edged closer, further work was needed to meet regulation. Eventually, the club opted for a move to Brentford Community Stadium.