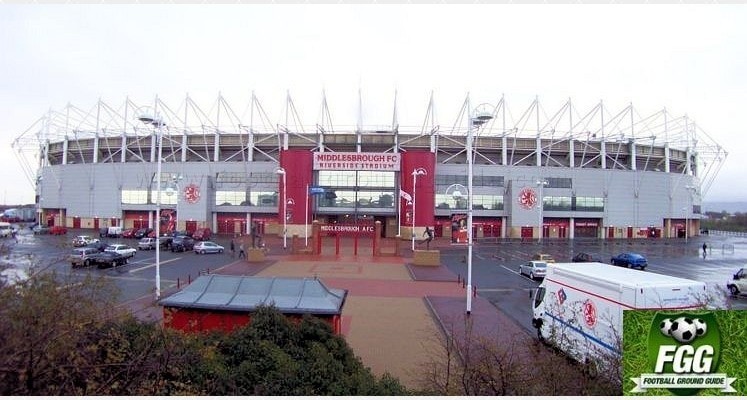 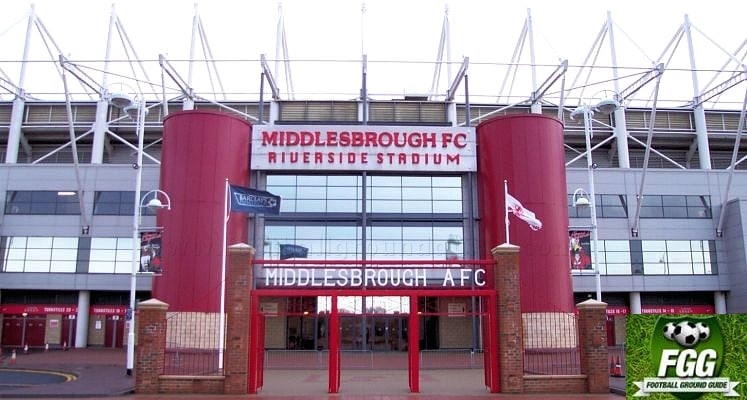 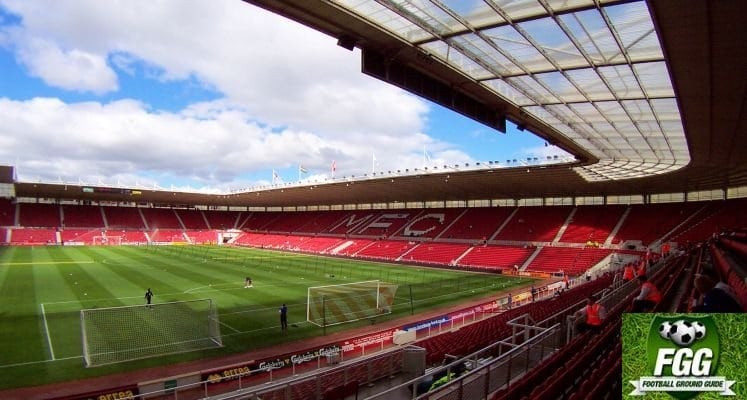 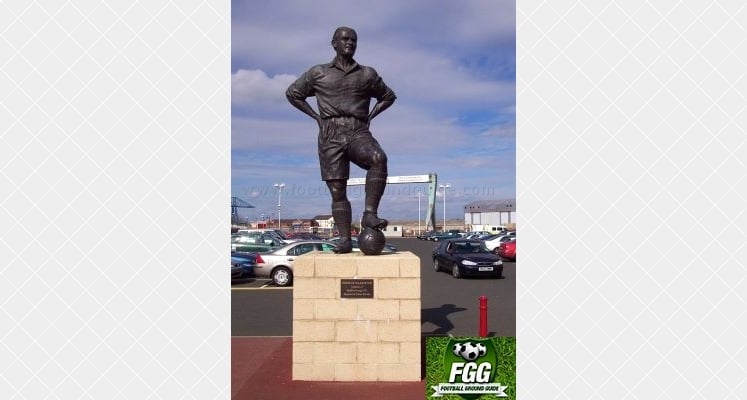 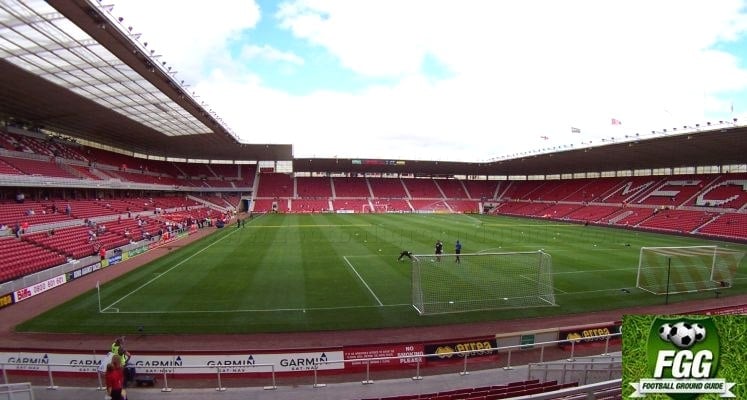 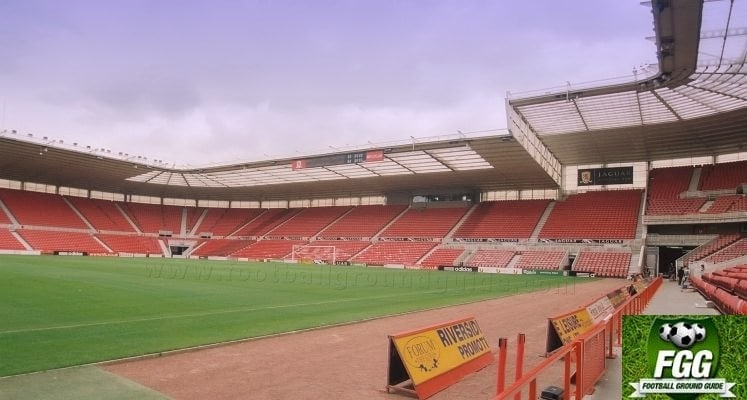 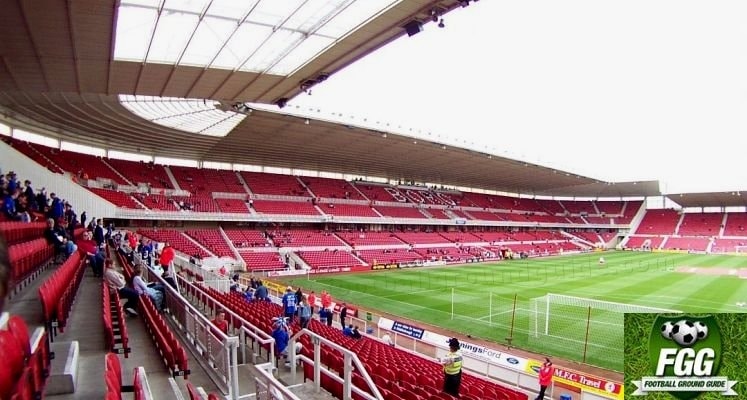 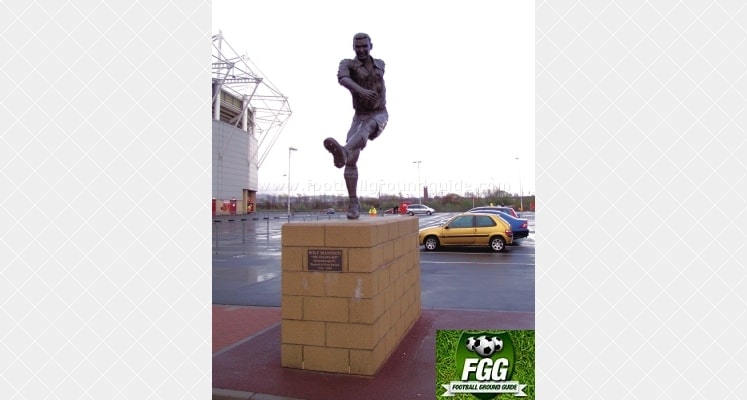 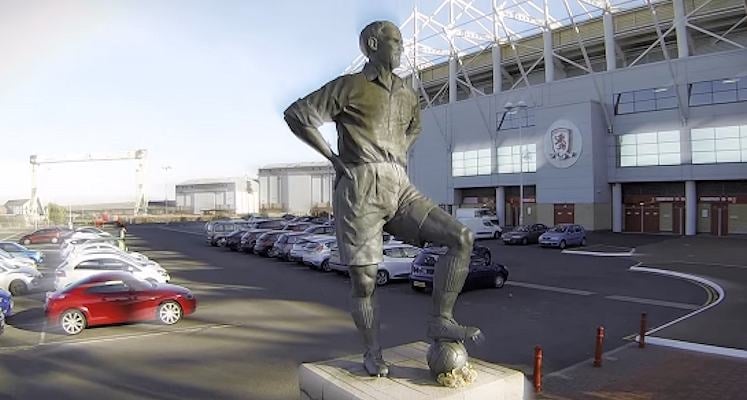 The Club moved to the Riverside Stadium in 1995 after leaving its former home of Ayresome Park where it had played since 1903. The stadium is totally enclosed, after the previous open corners to either side of the West Stand were ‘filled in’ with seating in 1998. All the stands are two-tiered, although the West Stand is slightly larger than the other three sides, which makes the overall appearance of the stadium look somewhat imbalanced. This stand also has a row of executive boxes running across its middle and has the players tunnel and team dugouts in front. The roof around the stadium is raised up above the seating areas to allow more light to get to the pitch, through perspex panels located between the roof and the back of the seating areas. There is also a large video screen situated in the South East corner.

Although the stadium looks a little bland on the inside, externally it looks great. This is especially so at night when the stadium is illuminated and is visible from some miles around. Outside the main entrance you will find a pair of statues dedicated to two former Boro greats; George Hardwick & Wilf Mannion. In between the statues are the old entrance gates to Ayresome Park, which is a nice link with the Club’s history.

Away supporters are housed on one side of the East Stand (towards the South East corner) at one side of the stadium  Just under 3,000 fans can be accommodated in this area. The turnstiles are electronic which means that you have to insert your ticket in a reader, to gain entry. The away turnstiles are numbered 53-61 and normally open 90 minutes before kick off (or at 6.30pm for evening matches). Once inside then the leg room is okay and the view from the away section is excellent. There is a SportingBet bookies outlet available and there are a number of flat screen televisions, showing Sky Sports (and the match itself once it has kicked off). The Club also allows fans to have at half time a cigarette outside the ground, if they so wish..

The catering had a fair choice of grub on offer, including the intriguingly named ‘Parmo in a bun’. Apparently, this is inspired by the local Middlesbrough dish that consists mostly of chicken in breadcrumbs, creamy sauce and cheese, it costs £4.20. For the less adventurous then there is the regular fayre of; Cheeseburgers (£3.80), Burgers (£3.50), Hot Dogs (£3.50), Pizza (£3), Chicken Balti Pies (£3), Cheese & Onion Pasties (£3) and Minced Beef Pies (£3).

In an effort to boost atmosphere inside the ground the Club have encouraged a singing section in the South Stand which is called the ‘Red Faction’. Including a drummer and looking colourful with flags and banners, they try and sing for the whole match. They certainly are noisy!

One thing to point out is that there is very little in the way of pubs or eating establishments nearby, so you will need to head into the town centre for these.

The main pub normally for away fans is Doctor Browns, which a ten minute walk away from the ground at the bottom of Corporation Road, in the town centre. However for certain high profile games, this pub reverts to home supporters only. This pub serves real ale, has SKY TV and on my last visit had a good mix of home and away fans, both inside and outside of the pub. On the corner opposite the pub, is also a sandwich bar, which was doing a brisk trade in amongst other things, trays of roast potatoes and gravy. To find this pub; If you were standing outside the stadium with the main entrance behind you, head over to your left and turn right down the road, going under a bridge. A little way down this road on your left, there is an underpass (there is usually some programme & fanzine sellers standing by its entrance). Go down through the underpass and as you emerge on the other side turn right and go down the road and through another underpass. You will emerge in a small retail park (there is a McDonalds over on your right), which you walk through unto you come to the main road. Turn right along this road and you will see the Doctor Browns pub over on your left. On the same Corporation Street as Doctor Browns but on the other side of the street, is an interesting bar called La Pharmacie, as it was once an old chemists shop. I have been informed that this bar is okay for visiting supporters.

If you like real ales and the smaller micropub, then you are in for a treat. As in Middlesbrough Town Centre, there are five Micropubs, all located very close to one another. They are; the Infant Hercules (Grange Road), Sherlocks, The Slaters Pick, The Twisted Lip (all in Baker Street) and the Devil’s Advocate (Borough Road).

Boro have been around the football world since way back in 1876 but whilst many see Middlesbrough and the Riverside go hand in hand it hasn’t always been that way. In fact, the Riverside Stadium has only been home to the club since 1995 with the Taylor Report, which came about off the back of the Hillsborough disaster, forcing the club to move. Prior to that Boro had spent 102 years calling Ayresome Park home; that stadium was developed by Archibald Leitch with the ground forming part of the 1966 World Cup. Even with over a century at Ayresome Park though there is many a year not yet accounted for. The early years of Boro’s existence was spent at Linthorpe Road West cricket ground.

It is quite easy to find. Just follow the A66 (signposted Teesside from the A1), passing Darlington FC’s former ground and on into Middlesbrough. Carry on up the A66, through the centre of Middlesbrough and you will pick up signs for the Riverside Stadium. There is a small amount of parking available at the stadium itself (in Car Park E). It costs £8.50 per car (£6 plus £2.50 booking fee) and spaces need to be pre-booked through the ticket office on 01642 929421. Otherwise there are a number of private parks located (mostly on waste land) nearby. Also when you reach the turn off the A66 (as signposted) for the stadium, then rather than at the top of the slip road turning left towards the stadium, then instead if your turn right to go back across the A66, then there is plenty of street parking available in this area. It is then about a 15-20 minute walk to the away turnstiles.

Jerry Hill adds; ‘I would suggest that away fans should follow the route marked “away coaches” from the A66, as this passes many private car parks along the river, all priced at £5’. Bear in mind though that if you do park at one of these car parks, then it may take 45 minutes or so after the game, before you can exit them. Otherwise, as the stadium is about one mile from the town centre you could also consider parking in a long stay car park in the town centre (about a 15-20 minute walk away from the ground). Kevin a visiting Fulham fan tells me ‘I parked at the France Street long stay car park, which is free on Saturdays. It is about a 10-15 minute walk to the Riverside.’ This council-run car park can be found just off the A66 and its postcode is TS4 2AP.  There is also the option of renting a private driveway near the Riverside Stadium via YourParkingSpace.co.uk.

The Riverside Stadium is around a 15-20 minute walk from Middlesbrough Railway Station which is located on Albert Road. Although there is a direct train service from the North West, fans travelling from other parts of the country, will most likely find themselves changing at Darlington, for Middlesbrough.

The nearest airport is Teeside which is located just under 13 miles away, just outside Darlington. To get to the stadium it may be an idea to head into Darlington and then take a train to Middlesbrough, or to get a taxi from to airport to Middlesbrough which would cost around £20.

Like a number of Clubs, Middlesbrough operate a category system (A&B) for the pricing of tickets, whereby the most popular games cost more to watch. Category A prices are shown below, with Category B prices shown in brackets.

Official Programme: £2.
Fly Me To The Moon Fanzine: £1

There is no denying that Middlesbrough are a club that pull in a huge fan base up in the North East of England but, actually, they are largely rival free. Clashes with Sunderland and Newcastle United, who are located 30 and 40 miles away respectively, bring about a real buzz to the air but with the Geordies and Mackems having much stronger hatred for one another the animosity doesn’t quite hit the same heights.

The Club conduct tours of the stadium on Mondays, Tuesdays, Thursdays plus Sundays. The tours cost £6 for adults and £3 for senior citizens and children. Tours must be booked in advance on 0844 499 6789.

The video of a Bird’s Eye View of the Riverside Stadium was produced by Middlesbrough FC and made publicly available for distribution via YouTube. 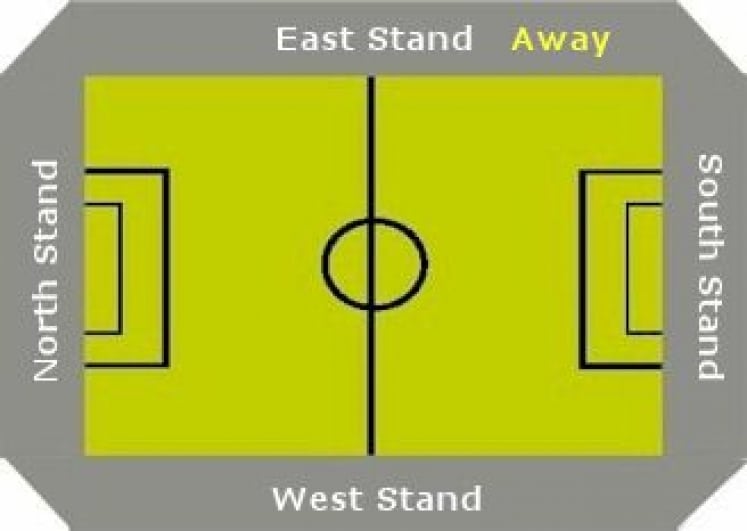