Safe standing: All you need to know about the rail seating debate

The safe standing debate has been rumbling on amongst football fans, clubs and authorities for years now. There is some strong opposition to the idea but also plenty of appetite for the return of standing with many paying punters feeling they should have the option to stand in support of their team. The calls for the safe standing return is unlikely to be going anywhere any time soon. Here we look at the latest updates on the subject.

Has standing ever been allowed at football stadiums?

Depending on your age, you'll either be very familiar with standing in stadiums or it's a concept that will be completely alien to you. To answer the question though, yes, back in the day, terraces would be chock full of supporters bouncing up and down in singsong to support their team. The closeness and the sheer number of people packed in together would generate a phenomenal atmosphere. You'll be hard pressed to find anyone that disagrees with those statements. They're as good as facts. Unfortunately, there are some other facts that couldn't – and still can't – be ignored.

Why was standing in football stadiums banned?

The obvious answer is the Hillsborough disaster, which saw 96 Liverpool fans lose their lives. Of course, there are far more examples of football stadium disasters that explain why something had to give with respect of how match days were organised; crushes were becoming too much of a regular occurrence.

Going back to the Hillsborough disaster; it was as a result of the report findings that were issued ahead of the 1994/95 season that saw all-seater stadiums become mandatory for the two top tiers of English football. That was, however, nearly 30 years ago so the big question remains whether or not safe standing should be allowed.

Throughout the safe standing debate there does seem to be one aspect that is easily overlooked. What fans want now is safe standing. In the eighties – and before – what they had was an unsafe free for all. Any return of standing will look very different to the scenes you'd have seen 30 years ago.

Although UEFA regulations state that international matches have to take place in all-seater stadiums there are several major grounds in Europe that use safe standing. The most notable of these sides is probably German outfit Borussia Dortmund; they facilitate safe standing through the use of rail seating. It's not only on the continent where safe standing is being set up though.

In Britain, Celtic Park have rail seating in place for up to 2,600 people, which has been in place for five years. The key thing to note there is that Celtic aren't legally restricted under the same rules as English Premier League and Championship sides. Premier League clubs Tottenham, Wolves and Manchester United are already geared up with rail seating as well with United's city rivals, Man City, announcing they intend to do the same. This would mean they could quickly and easily convert from rail seats to standing if given the go ahead by government legislation. 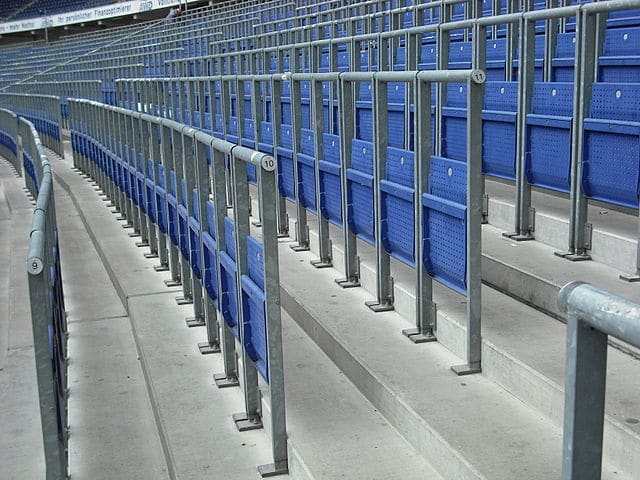 So, will safe standing be allowed then?

The honest answer to this question is who knows. At the moment standing at football matches – safe or otherwise – is not permitted hence we have stewards telling people to ‘sit down please' every two minutes.

West Brom, who have recently been relegated from the Premier League, are largely responsible for the fact the matter is a hot topic. They applied for the introduction of safe standing at their home, the Hawthorns, back in 2018. This was quickly shot down by the authorities. Off the back of that rejection, a formal petition was born and received enough signatures for it to land before parliament. As yet though no law change has been passed. What was the government stance we hear you ask. In two words, largely inconclusive.

The main takeaway was that those in power believe that “all-seater stadia are the best means to ensure the safety and security of fans”, which we appreciate doesn't sound like a sitting on the fence response. That's not where the government statement ended though with acknowledgment coming that “the time is now right” for safe standing to be discussed again.

So, with all what we've discussed to this point considered, what does the future of watching football actually look like? For the foreseeable it would seem that the authorities are playing things safe by sticking with the all-seated approach, however, as more and more high profile clubs build in ‘ready to go' safe standing there will be a growing pressure to at least trial standing spectators.

When was standing made illegal in English football?

Does the all seated rule apply to all professional leagues in England?

No. The ruling only included the top two divisions with other UK countries also excluded.

What triggered standing sections to be taken away?

There were a combination of safety factors centred around stadium disasters. Hillsborough was the main instance though.

No. Several stadiums have installed rail seating though, which can be easily switched to safe standing.

What English teams have rail seating in place?

In the Premier League there are three teams – Wolves, Man United and Tottenham – that have an element of this seating in place.

Are any others planning on installing rail seating?

Yes. Manchester City are the biggest name to have confirmed this intention.