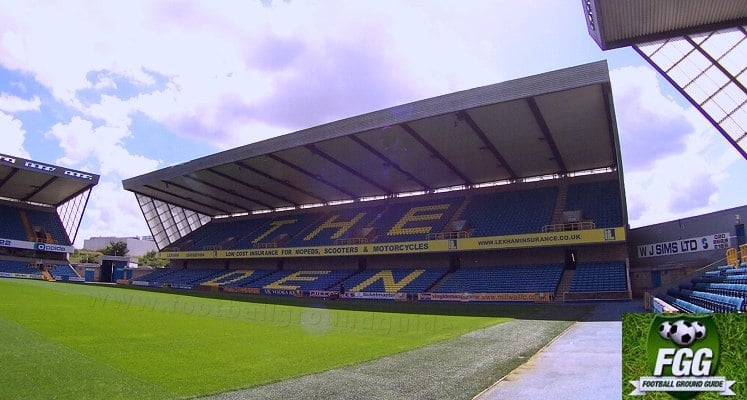 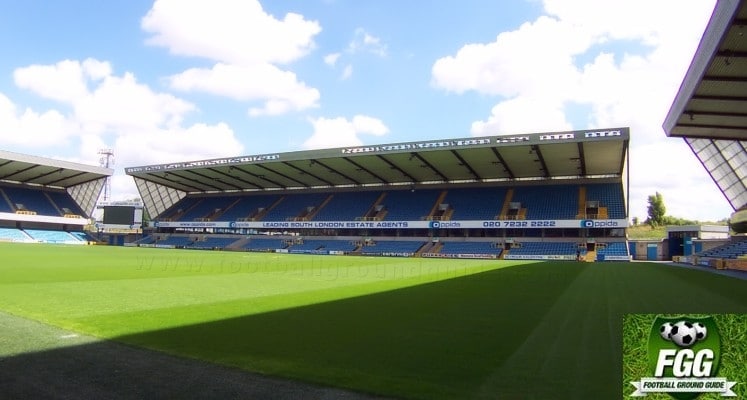 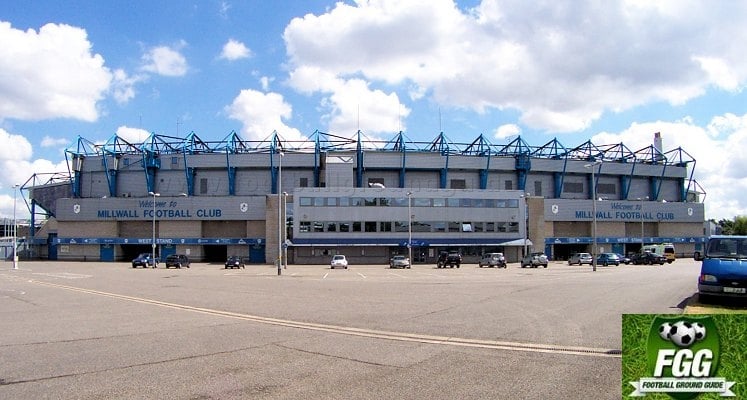 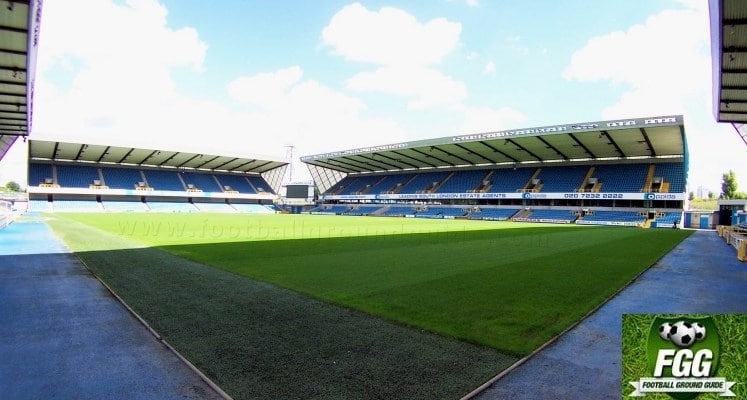 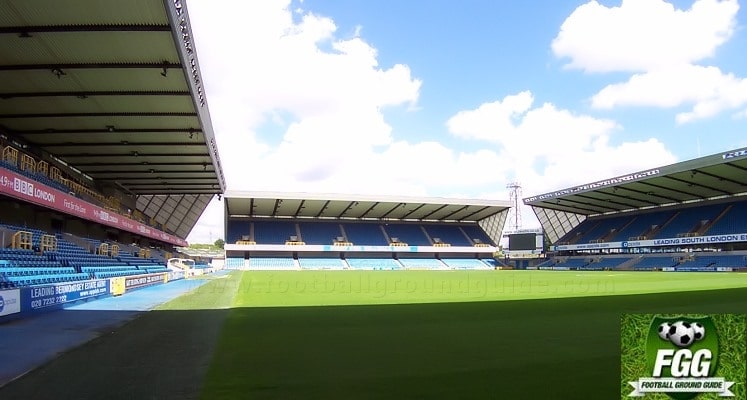 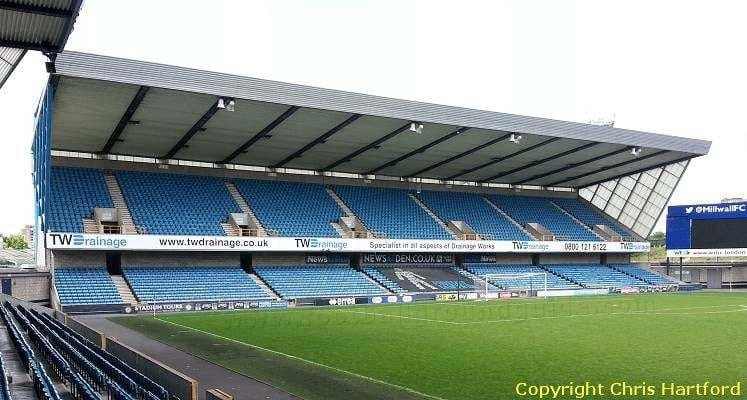 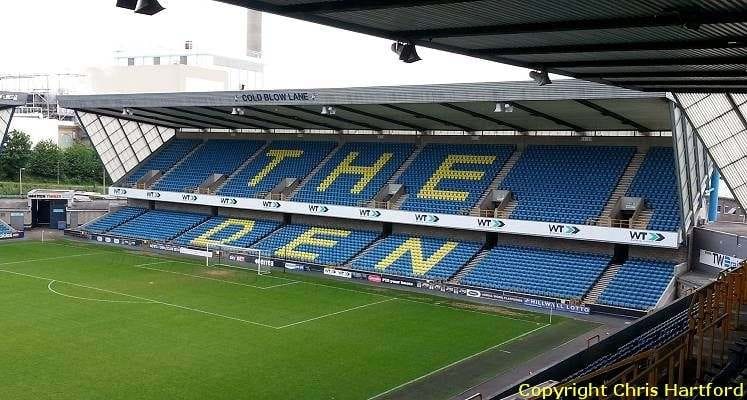 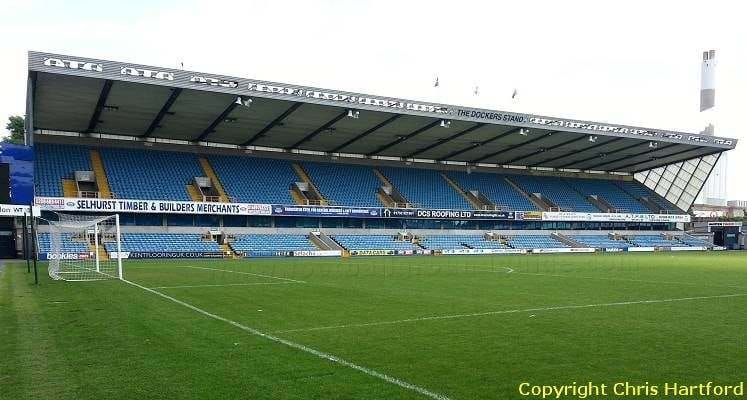 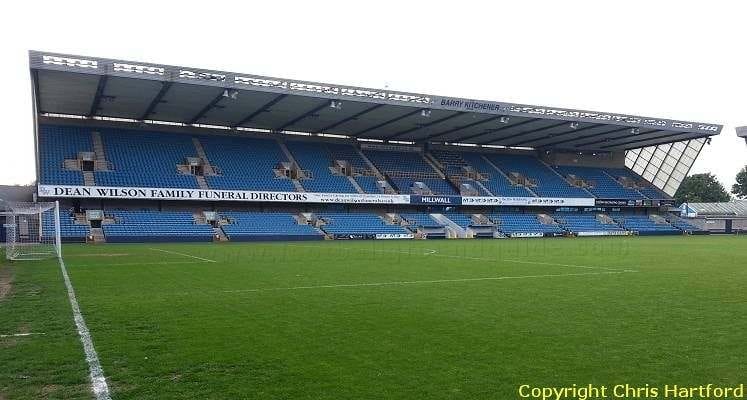 The Club moved the relatively short distance to then was called the New Den after leaving their original Den ground which was their home for 83 years. This was first new major football ground to be constructed in London since before the Second World War. The stadium is made up of four separate two-tiered stands that are of the same height and look fairly similar. On one side is the Barry Kitchener Stand (named after a former player) which has the players tunnel and team dugouts at its front. This simple looking stand has the same characteristics as both ends with windshields to either side in the upper tier and with the upper tier slightly overhanging the lower tier. The Dockers Stand on the other side is slightly different having a row of executive boxes running across its middle. Between the East and North Stands in one corner is a large video screen.

Millwall were originally founded back in 1885 under a different name – Millwall Rovers – and, since then, they’ve called a number of places home. The early years were spread across North Greenwich, The Athletic Grounds, the Lord Nelson Ground and, the first of them all, a literal dump of a ground on Glengall Road. Their next stadium though would become a name synonymous with Millwall; it wasn’t, however, anything to do with the fact the ground was designed by the highly respectable Archibald Leitch.

The club played their home games at the Den for over 80 years with that period also including the infamous height of hooliganism. What happened after those 83 years? Well, standing at grounds became prohibited under the Taylor Report and the club moved to the creatively named ‘The New Den’ – genius, hey? That saw them move just a few hundred yards and they’ve remained there since the changeover in 1993.

Away fans are located at one end of the ground in the North Stand (usually in the upper tier only). Around 4,000 away fans can be accommodated in this end. Like the general improvement in football, a trip to Millwall is not as threatening as it once was. However, it is hardly a relaxing day out and I found the Den to be quite intimidating. The large police presence at the match I attended did nothing to dampen this feeling. I would advise that you exercise caution around the ground and not to wear club colours. Food on offer inside includes a range of pies from the ‘Pie Factory’ including Steak & Ale and Chicken Balti (£3.50). There are also Cheese & Onion Pasties (£3.50), Sausage Rolls (£3.10), Burgers (£4) and Chips (£2.10).

The most popular method of travel for away fans to the Den is by official club coach, or by train from London Bridge. The Police are well drilled in dealing with the coaches and supporters arriving by train. Once inside the ground, you will generally find the stewards helpful and friendly.

Richard Langran a visiting Leicester City fan adds; ‘We chose to drive down to Millwall and park away from the stadium. It was somewhat intimidating walking to and from the ground and the Leicester fans were kept back inside the stadium for quite a long time after the final whistle’. Luke Fern a visiting Bolton Wanderers fan informs me; ‘Inside the ground, the concourse is mostly concreted and looks very dull. It is also very cramped with little space available for fans to get around those queuing for food and drinks. However, the view from our seats was excellent and the stewards were very tolerant and friendly. We had traveled by official Club coach and had to wait 45 minutes after the game had ended before we were allowed to exit the stadium car park’.

There are not many pubs located near to the stadium and those should be avoided by away supporters.  If travelling by train then it is probably best to grab a beer around London Bridge before moving onto the ground. I would advise keeping any colours covered, even when drinking in the London Bridge area. Inside the ground alcohol is available in the form of; cans of Tetley’s Smooth (£4.10), plus plastic bottles of Carlsberg (£4.10) or Somersby Cider (£4.60).

Chris Lynskey a visiting Scunthorpe United fan recommends; ‘The Shipwrights Arms on Tooley  Street, near London Bridge. Come out of London Bridge tube station, turn right and its only 200yds down the road on your right hand side. A lovely little pub which also serves food. We left the pub at 2.15pm to go and catch the train to the stadium and made it comfortably for kick off’. Also close to London Bridge Station on St Thomas Street is the Bunch of Grapes pub. Also not far from these pubs on Tower Bridge Road is the ‘Pommelers Rest’ a Wetherspoons outlet.

On the Borough High Street by London Bridge is the Barrow Boy & Banker, which is a Fullers pub and has the benefit of a large screen showing Sky Sports. Further down the High Street is the Borough Market, which on nearby Stoney Street is situated the legendary Market Porter pub. This pub is also a regular listing in the CAMRA Good Beer Guide and always has 9 real ales on tap. Mick Hubbard adds; ‘Also on Borough High Street is the George Inn, which is owned and leased by the National Trust. It is an outstandingly beautiful building, and the pub itself retains its wooden flooring and wall panelling. It serves its own ‘George Ale’ which went down nicely.’

The Club are facing the prospect of the Club being forced to leave the Den, if the local Lewisham Council go ahead to compulsorily purchase land around the stadium. The Council are wishing to push forward a regeneration plan for the local area, part of which currently is used by the Club. The Council would sell off the purchased land to a developer. Although the Den ground itself is directly unaffected, the losing of supporting infrastructure, such as for example, most of the current Club Car Park, would make the Club’s stay untenable and Millwall would need to relocate elsewhere. The Council are expected to make a decision on whether to go ahead with the Compulsory Purchase Orders in early 2017. If they do approve these plans then expect a long drawn out battle through the courts as Millwall attempt to save their home.

There are a number of ways of getting to the ground, but the most straightforward, if not the shortest in distance is to follow the A2 into London from Junction 2 of the M25. The A2 actually passes the ground. Once you go past New Cross Gate tube station on your right the ground is about a mile further on. The only awkward bit is about half way in-between New Cross Gate and the ground where the road splits into two. Keep to the right following the signs A2 City/Westminster. You will come to the ground on your right. Street parking can be found on the small estate on your left just past the ground, otherwise, be wary of on street parking restrictions around the area of the ground so check lamp posts for signage. There are no sizeable car parks around the ground (typical British Planning!). There is also the option of renting a private driveway near the Den via YourParkingSpace.co.uk.

It is probably best to go by rail, as South Bermondsey Railway Station is only a few minutes walk from the ground. There is a direct walkway specifically built for away fans which takes you directly to the away end and back to the station afterwards. This has made the Police’s job of keeping rival supporters apart so much more manageable. As you exit the station turn right for the visiting supporters walkway. If your team brings a sizeable following, then an ‘away fan’ football special may be laid on from London Bridge. In these instances, the Police are well drilled in getting away fans into the ground from the special train and safely away afterwards. Although don’t be surprised if you are held in the stadium for sometime after the final whistle, before being allowed back up the walkway to the station. You may also then be held for a while at the station itself, so please bear this in mind when booking the time of your return journey home.

You can also reach near the ground via New Cross or New Cross Gate Stations, however they are around a twenty minute walk away from the Den and is not really recommended for away fans to use.

Like a number of Clubs, Millwall has a category system (A, B & C) for ticket pricing, whereby the most popular games cost more to watch. Category A prices are shown below, with Category B & C tickets shown in brackets:

** Under 12 tickets available only when purchased with an adult or senior ticket.

There is absolutely no love lost between Millwall and West Ham. For modern day fans, they might know the rivalry as it has been depicted in film and hooliganism has played a major part of the hatred. It’s not all that though with the roots of the rivalry actually dating back to the early 1900s with major disagreements over workers rights down on the docks.

The Millwall stadium, the Den, is just four miles away from Charlton’s home ground and, as such, meetings between the two take on an added level of intensity – particularly in the terraces. There have been plenty of clashes over the years as well with both having trodden similar paths at times.

When Millwall entertain Crystal Palace things do get spicy. The reason is very similar to that of their rivalry with Charlton as there are just six miles between the two grounds. In addition to the close proximity, the two clubs have spent plenty of time playing at a similar level.

Special thanks to Chris Hartford for providing some of the photos of the Den Millwall. 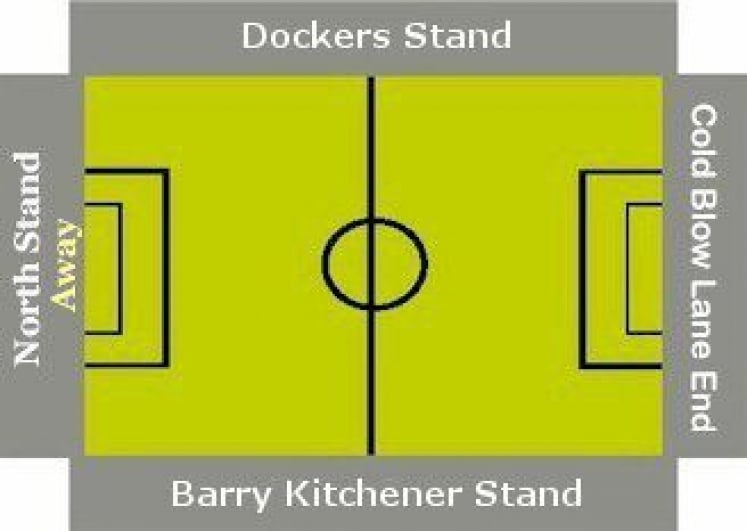