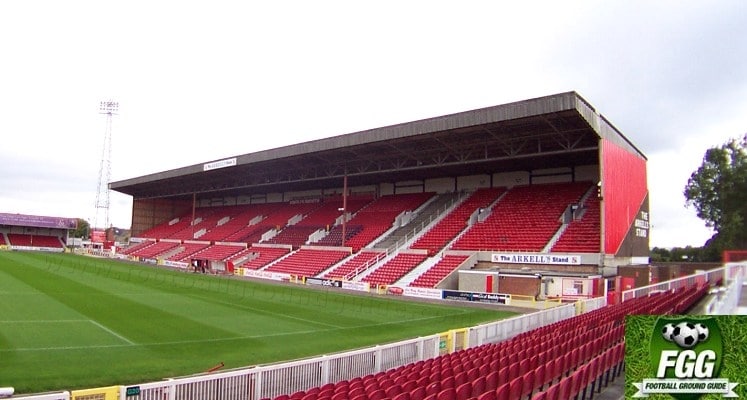 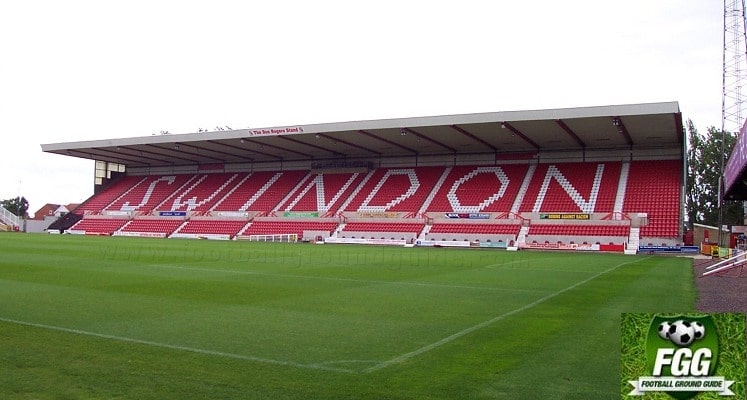 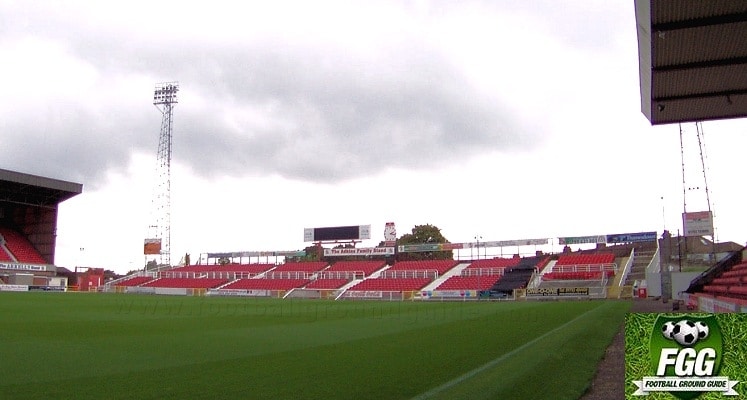 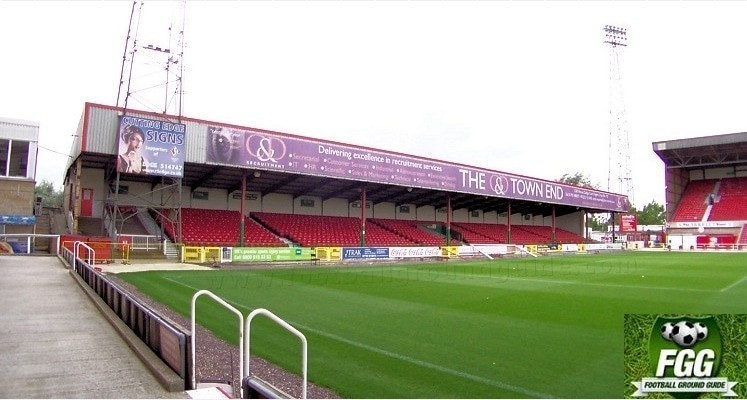 A traditional looking ground, that has an interesting mix of stands. Both sides are large two-tiered covered affairs that tower above the two smaller ends. The Main Stand is the Arkells Stand on one side. Built in 1971 the stand is a fairly simple affair and has the players tunnel and team dugouts in front. It has windshields to either side and a few supporting pillars. Opposite is the smarter looking Don Rogers Stand. Opened in 1994, this stand has a cantilevered roof, allowing spectators to have an uninterrupted view of the playing action. It has a large upper tier, with a much smaller lower tier. The FastPlant Town End is a small covered stand, that is the traditional home end. Unfortunately, it has a row of supporting pillars that run across the front of it. Oddly on one side, the base of one of the floodlight pylons is situated within the stand, with the pylon itself rising up through the roof of the stand. At the other end is the Stratton Bank Stand. This area is uncovered and open to the elements. It has a small electric scoreboard situated above it, next to which is a Rolex Clock. Apparently, this is the only Rolex clock that can found within a football ground anywhere in the World. The ground also benefits from a striking set of four floodlight pylons.

In 2017 the stadium was renamed the Energy Check County Ground in a corporate sponsorship deal.

The Club have come to an agreement to purchase the County Ground from the local council. In this unique deal, the ground will be jointly purchased by Swindon Town Football Club and Swindon Town Supporter's Trust, safeguarding the future of the site for Swindon Town fans. The purchase of the County Ground is likely to result in more investment into it in terms of improving its facilities.

Away fans are located in the Arkells Stand at one side of the pitch, where up to 1,200 fans can be housed. This is an older stand with facilities to match, but at least you are under cover. If you are at the back of this stand there is one supporting pillar which may impair your view of the goal otherwise it is fine. You even get a view of some of the rolling Marlborough Hills beyond one corner of the ground! There is a small kiosk at the back of stand serving amongst other things a range of pies, but be careful when taking them back to your seat. The entrances to the seating areas are through large solid doors, and to compound matters, they open out towards you!

Teams with a larger away following can also be allocated the Stratton Bank End if required. A further 2,100 fans can be accommodated in this area, but the end has no cover and is open to the elements. Fine on a nice sunny day, but on a cold wet, winters day, it can be grim. This area was a former terrace that has had seating bolted onto it, which meant that the height between rows is not great. I found Swindon to be a relaxed and fairly friendly day out, although the size of Police presence on my last visit seemed excessive.

Away fans are treated to their own bar, called Bar 71, which is located by the away turnstiles. However it is quite small and tends to fill up quickly, with door men preventing anyone else going in, so that it does not become over crowded. The County Hotel right by the ground, did not allow entrance to away supporters on my last visit. Best to continue down County Road and seek out the Cricket Club that sits behind the Arkells Stand. As Mark Osborne from Swindon adds; 'On match days home and away fans can park on the cricket ground (for a small fee) and then have access to a drink in the cricket club. This is a very friendly (as well as cheap) club that always welcomes away fans'. I would echo these comments but also add that you can still get into the cricket club (there is no charge) even if you have not parked there. Please note though that the Cricket Club facilities are not available for night matches or when the Cricket Club is playing a match. The latter doesn't happen often but can do towards the beginning and end of the football season, when fixtures overlap.

Audrey MacDonald a visiting Hartlepool United fan, recommends 'The Merlin' on Drove Road, near to the magic roundabout. 'Away fans are welcome and they have Sky Sports showing on 12 television screens and even in the gents (according to my husband)'. Derek Shaw a Wolverhampton Wanderers fan agrees; 'The Merlin pub is friendly and welcoming to away supporters. It's a decent size pub which serves meals and has a number of TV screens installed. On my visit, there were a couple of bouncers and two policemen outside but there was no sign of any trouble, either inside or outside. I enjoyed the atmosphere in the Merlin which is less than ten minutes away from the County Ground and would recommend it'.

Swindon town centre is a 15 minute walk away where there are plenty of pubs to be found. If arriving by train and you like your real ale then the 'Glue Pot' on Emlyn Square is worth a visit with seven local beers on tap.

Alcohol is available within the ground to away fans in the Arkells Stand (but not in the open Stratton Bank End).

The ground is well signposted in and around Swindon town centre. Just follow signs for 'The County Ground'.

From M4 Junction 15
Follow the A4259 (Queens Drive) towards Swindon. Go across one roundabout and at the next take the first exit onto the A4312 (signposted Swindon/Football Traffic). You will see the floodlights of the County Ground over on the right, as you approach the large Magic Roundabout. The County Ground is on the corner of this roundabout.

From the North
A419 from Cricklade/Cirencester/M5:   Continue on the A419 until reaching the top of the new 3 lane stretch of dual-carriageway, which runs uphill. (I would advise you to stay in the inside lane on this climb as the exit approaches quickly). Take the exit at the top of the hill (Lady Lane Junction). At the lights go right, then almost immediately at the next set of lights go left. Follow this road through the next set of traffic lights (passing the Motorola building to the right), then branch left onto the A4311. From here follow this road, following signs for Town Centre. At Transfer Bridges roundabouts turn left at the first and then straight over the second. The County Ground is on the left after the mini-roundabout. The County Ground is one of the few remaining football stadiums you can notice from a fair distance, due to the striking floodlights. Thanks to Robin Sharpe for supplying the directions.

If you survive the Magic Roundabout then there is some street parking. Otherwise park at the cricket club (take County Road off the Magic Roundabout, go past the County Hotel on your right, you will see a small sign further down on your right for football parking, just before the mini roundabout) which costs £5. Steve Pollott a visiting Wolverhampton Wanderers fan adds; ' We parked at the St Joseph Catholic college in Ocotal Way. It cost £5 per car and was only a ten minute walk away from the ground. However, it was  bit slow getting out at the end of the game, but it was well run.' There is also parking available at the Merlin pub on Drove Road, which costs £2. There is some parking available at the County Ground itself at £10 per car. There is also the option of renting a private driveway near in the local area via YourParkingSpace.co.uk.

The County Ground is walkable from Swindon Railway Station and will take you around 10-15 minutes. Leave the station, cross the road and proceed up the road between the two pubs (Great Western and Queen's Tap), continue to end of road.  Turn left, proceed along Manchester Road, through traffic lights as far as you can go.  At the junction turn right. The County Ground is about 300 yards up this road on the left. Thanks to John Bishop for providing me with the directions.

In addition, the Club offers a number of Family Tickets (excluding the Town End).

* Under 11's can gain free entrance if they become Junior Club Members.

Map showing the location of the County Ground, railway station and listed pubs

Located near one corner of the ground is the 'Magic Roundabout'. Whoever designed this must have been on something. It is a large island surrounded by five mini roundabouts, which effectively means that traffic can go round the main roundabout the wrong way! Confused? I was!

Swindon Hotels - Find and Book Yours And Help Support This Website

If you require hotel accommodation in Swindon then first try a hotel booking service provided by Booking.com. They offer all types of accommodation to suit all tastes and pockets from; Budget Hotels, Traditional Bed & Breakfast establishments to Five Star Hotels and Serviced Apartments. Plus their booking system is straightforward and easy to use. Yes this site will earn a small commission if you book through them, but it will help towards the running costs of keeping this Guide going. 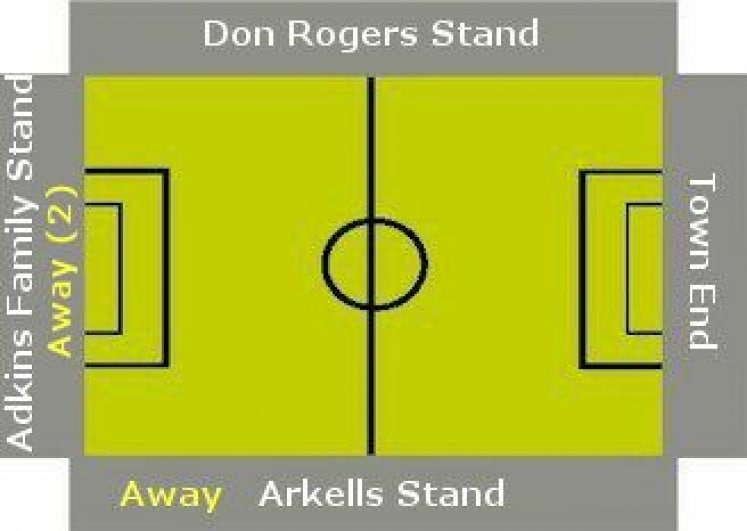