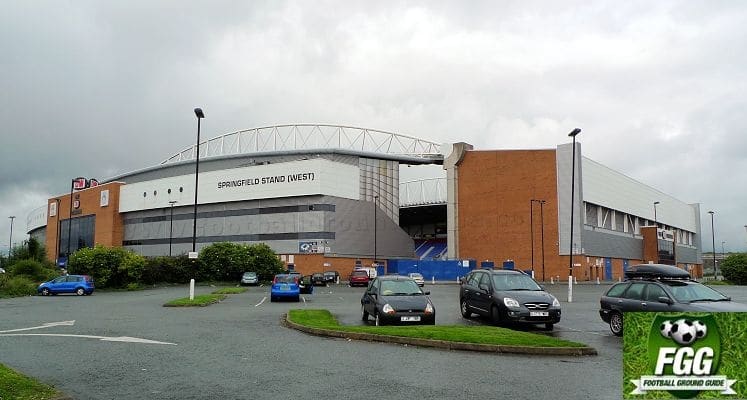 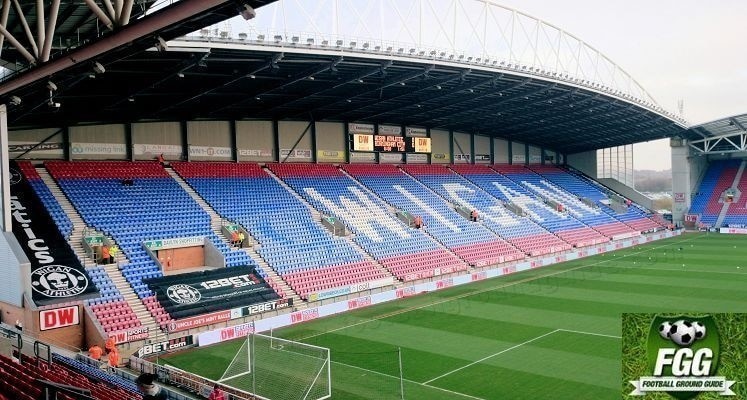 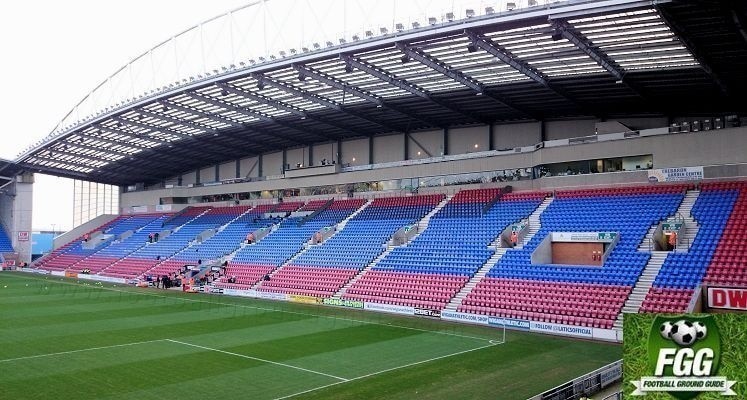 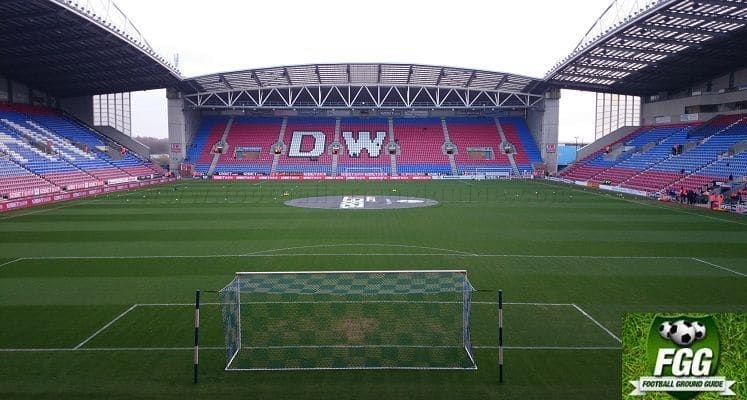 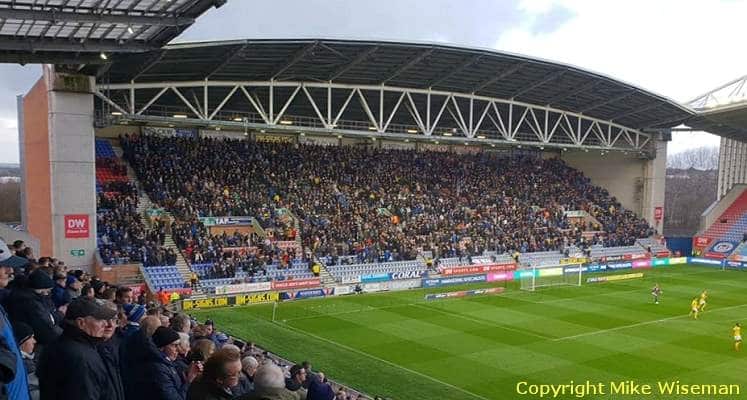 The DW Stadium was opened in 1999 after the Club moved from its former home of Springfield Park, where it had been in residence since the Club’s formation in 1932. The DW is a functional stadium but overall it has somewhat of a bland look. In fact, I would say that it looks more interesting from the outside from a distance than it does within. The four separate stands are of roughly the same height and are all single tiered. They are also quite steep meaning that fans are sat quite close to the playing action, although this is mitigated a little by the fact that the stands themselves are set back a fair distance from the pitch perimeter.

Both the side stands have large supporting steel frameworks visible above their roofs, whilst oddly both ends are different, having the steel framework located below the roof line. Unusually for a modern stadium, it does seem to be lacking in the number of corporate areas and executive boxes. There is an electric scoreboard above the Boston (East) Stand, on one side of the ground. The stadium is also shared with Wigan Warriors Rugby League club.

There are little known developments planned at the DW stadium right now. The Wigan ground has been in the news in recent times though. Firstly, it has been subjected to a few criminal damage attacks whilst, on a more positive note, they club have agreed to allow their Rugby League tenants, the Wigan Warriors, stay put.

Away fans are located in the North Stand at one end of the stadium, where up to 4,800 visiting supporters can be accommodated. Although this stand has a capacity of 5,500 seats, the allocation is restricted to 4,800 to prevent over crowding on the concourse. The stadium is functional and the facilities adequate, but it just seems to lack something, to give it that memorable feeling. The view of the playing action and leg room are generally adequate. To the left of the away section is where the singing Wigan fans tend to congregate, who are aided by a drummer. The public address within the stadium is particularly loud, none so when ‘I’m a Believer’ by the Monkees is blasted out just as the teams get ready to kick off.

The concourses are spacious and the facilities are good. There are screens showing the early kick off game and a betting outlet. Food on offer includes a range of Pies, including Chicken Balti, Meat & Potato, Steak, Pea Supper, Cheese & Onion (all £3), Jumbo Sausage Rolls (£2.90), Hot Dogs (£3.50) and Cheeseburgers (£3.80). The stewards were generally helpful and relaxed.

Scott Carpenter a visiting Newcastle fan adds; ‘the concourses seemed too small for the large amount of away fans attending on my visit, which led to it being rather uncomfortably crowded at half time’. Pat Bird a visiting West Bromwich Albion fan informs me; I was very impressed with the price to get in (£20), for a seat right behind the goal. The end given over to visitors was steeply banked with generous leg room. So far so good, however, I would have to agree with the comments of the Newcastle fan. It was an almighty struggle to get through to the loos at half-time. The concourse and toilet areas did not seem adequate to cope with a large away following. We parked in the car park behind the visitors end, which was fine, however, it took an age to get away after the match. For anyone visiting the DW you could do worse than have a meal after the match in one of the nearby restaurants before heading for home. Within 100 metres of the ground there is a Franky & Bennys, an Indian restaurant and a number of other establishments’. Directly behind the away end there a Fish & Chip restaurant (which also has a takeaway) called Sharpy’s.

Simon Wright a visiting West Bromwich Albion fan informs me; ‘Beside the away turnstiles is an entrance to the large indoor Marquee Bar, specifically for the use of away fans. It has the usual bar, big screen television and sells pies, as well as teas and coffees. It’s a great comfortable facility and welcomes families.’ I was particularly impressed with this facility and with a stage on one side and low lighting, I was almost waiting for the dancers to emerge! However on my last visit, the queues to get served were quite long eventhough there wasn’t a particularly large away following in attendance. Otherwise the traditional pub for away fans visiting the DW stadium is the Red Robin, which is only a few minutes walk away from the ground opposite the Cinema Complex.

The centre of town is about a 20 minute walk away where you will find a Wetherspoons outlet called the ‘Moon Under Water’ which was popular with away supporters on my last visit. Also worth a visit is the award winning ‘Anvil’ pub, which is located next to the bus station and is listed in the CAMRA Good Beer Guide. Also worth a mention is the Berkeley on Wallgate (near the railway station). This fair sized pub, had a good mix of home and away supporters on my last visit, serves five ever changing real ales and shows Sky Sports on a huge screen. Andrew MacGregor adds; ‘The Swan and Railway pub opposite North Western railway station were very welcoming. They encouraged us to put our Reading flag up in the window and were very pleasant to us all’.

On the concourse, alcohol is available in the form of draught Heineken (£4.20), John Smith’s (£3.80), Strongbow (£4.20), plus small bottles of wine (£4). There are two counters serving beer and to try and bring some the order, at the largest one there is a queuing system in force which is overseen by the stewards. Plus there is a limit of buying two pints per person, so can you can get served relatively quickly compared to some other grounds. My only slight gripe is that no food is served from these outlets, meaning that you have to queue up again at a different counter for that. On occasions where the away end is sold (or almost sold out) then the Marquee Bar is opened at half time too.

Leave the M6 to Junction 25 then take the A49 to Wigan. After around two and a half  miles you should pass a junction on your left with the A577 and then approach a large roundabout, that has a McDonalds on the right hand side. Continue straight on but keep in the left lane and then at the lights (with the SCS Sofa and Bed store in front) take the left hand filter lane by the large Asda superstore towards Robin Park. Currently there is a new housing development on the left which has some handy street parking. Otherwise continue straight on passing the Red Robin pub on your right. At the next roundabout go straight across and at the next traffic lights turn right into stadium way for the ground and car parks.

Leave the M6 at Junction 26 and follow the signs for Wigan town centre along the A577. After around two miles you will pass an Aldi store on your left before reaching a large a roundabout (which is the junction with the A49). Keep in the left lane and then at the lights (with the SCS Sofa and Bed store in front) take the left hand filter lane by the large Asda superstore towards Robin Park. Then as From South above.

Paul Heywood adds; ‘I would recommend that away supporters, travelling from the South, should come off at Junction 26 (see From The North) as there are often queues from Junction 25 towards the stadium.

There is a large car park at the stadium, specifically for the use of away supporters, which costs £5 per car or motorbike, £10 for minibuses and £20 for coaches. As you may expect though, there is sometimes quite a delay in getting out of this car park after the game, especially if there has been a larger than normal crowd in attendance. Make sure though that you avoid parking on the nearby Retail Park, as parking there is restricted to two hours and I have been informed of a number of fans who have ended up getting parking tickets (£50) because of this. There is also the option of renting a private driveway near in the local area via YourParkingSpace.co.uk.

Wigan’s central railway stations (Wigan North Western & Wallgate stations) are a good 20 minute walk from the ground. So either take a taxi, or break up the journey with a few pub stops on the way!

On exiting Wigan North Western Railway Station turn left and go down the road heading under a railway bridge. On leaving Wallgate Station turn right and go down the road passing Wigan North Western Station on your left and then proceed under the railway bridge. It is a fairly straight walk along Wallgate Road. On reaching a Domino’s Pizza takeaway on you left, the road forks. Stay on the right hand side continuing past a Topps Tiles outlet on your right. After then passing a Volkswagen Garage on your right, you will reach a bridge over a canal, from which you should be able to see the DW Stadium over on your right. Either turn right just over the bridge and follow the locals on a shortcut alongside the canal to the stadium, or continue straight on under a railway bridge and then turn right into Frith Road which leads into Stadium Way.

Adam Hodson adds; ‘I caught the train to Wigan Wallgate, crossed the road in between the two stations and I jumped on the 621 First Manchester Bus which dropped me off outside the Red Robin Pub. I then had a short 3-4 Minute walk from the Bus stop to the stadium. Bus No 600, a more Frequent service, runs up to Robin Park Roundabout from the two stations, It’s about a 5-10 Minute walk from the roundabout to the Stadium.

Common with most Clubs, Wigan operate a category system (A, B & C) for matches whereby tickets cost more for the most popular matches. Category A prices are shown below with other categories shown in brackets:

Wigan vs Bolton rivalry: There are just eight miles that separate the home grounds of these two teams. With that in mind, the fact emotion sometimes spills over as they lock horns is hardly a surprise.

Wigan vs Blackburn rivalry: These teams only met for the first time in 1983, so they don’t really have a long standing rivalry. Despite that, Wigan and Blackburn have played each other a lot since then with the two sides playing in the same division regularly. It doesn’t attract the same heat as clashes with Bolton but it still exists.

For details of disabled facilities and club contact at the ground please visit the official Wigan Athletic website.

Special thanks to Mike Wiseman for the photo showing the North (Away) Stand on matchday when Birmingham City were the visitors. 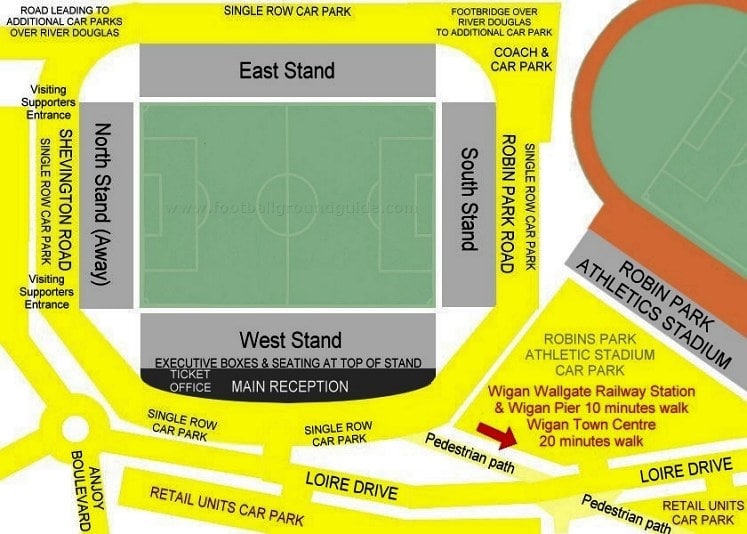