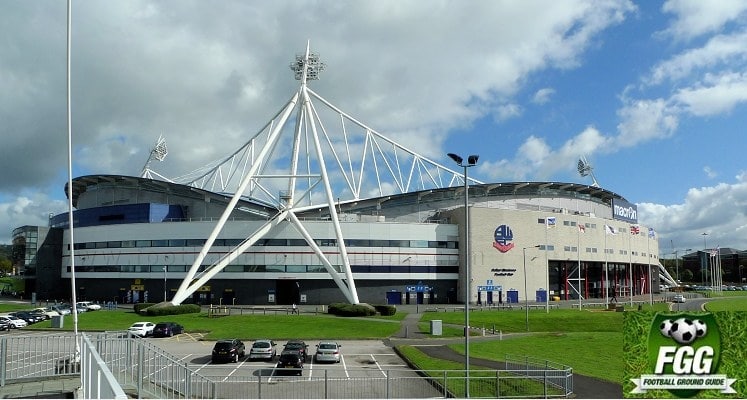 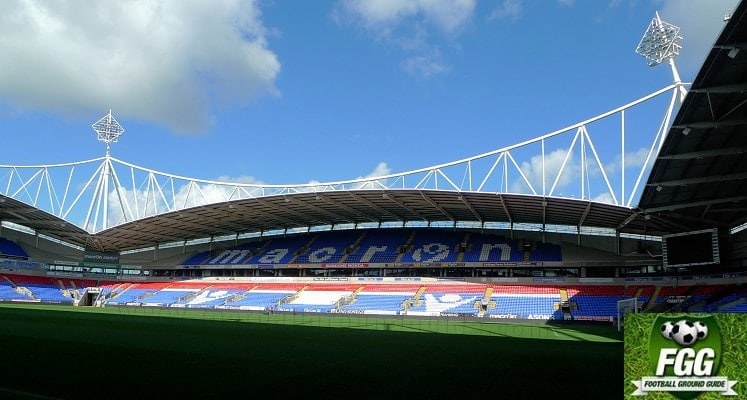 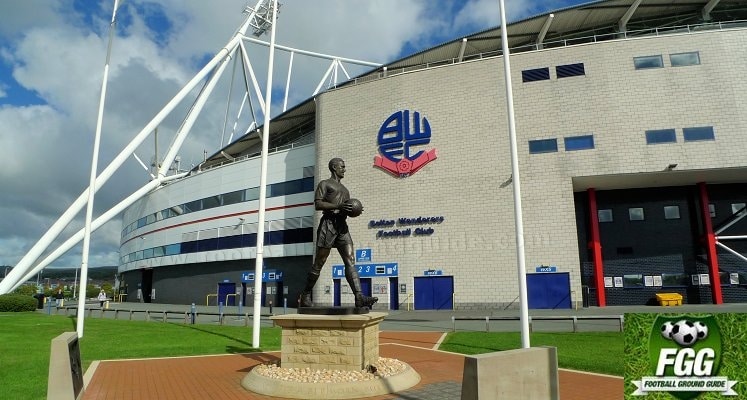 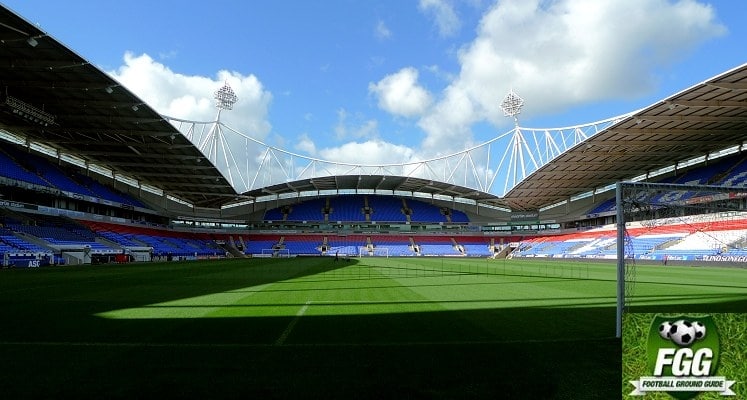 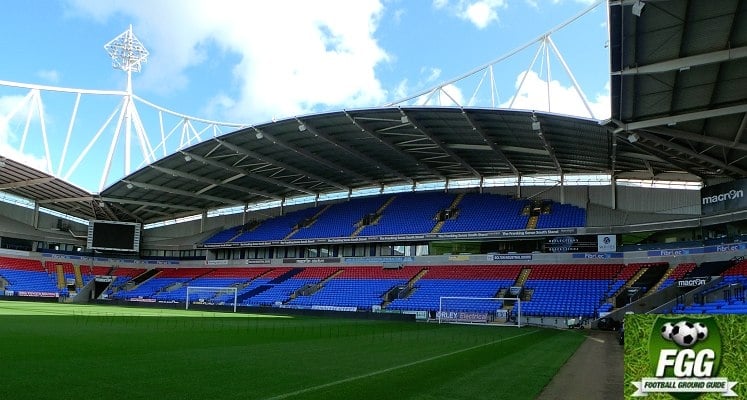 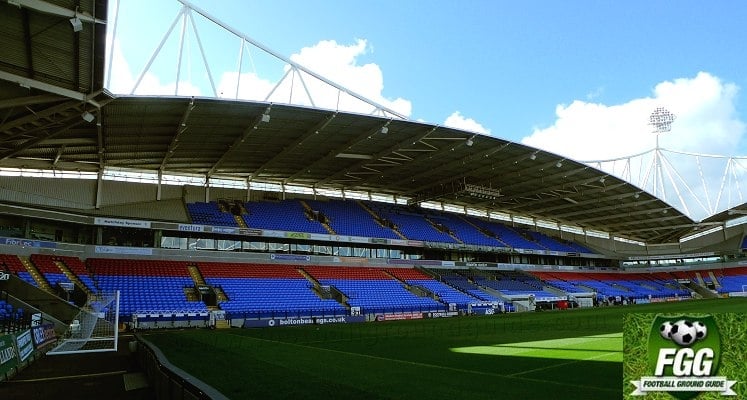 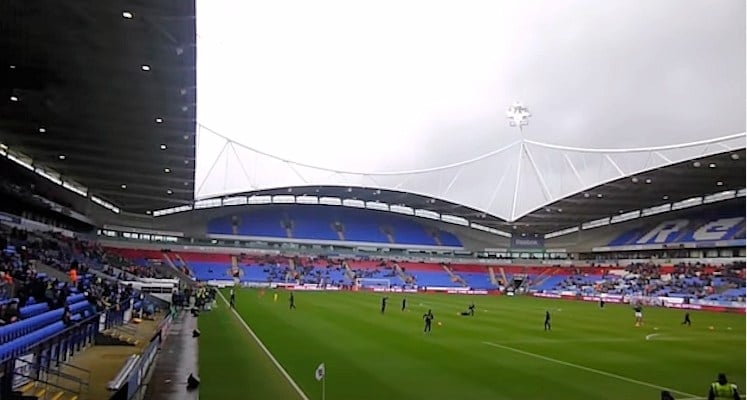 From the outside the stadium looks simply stunning and can be seen for miles around. I still think the view of it driving down the slip road from the M61 motorway, is one of the greatest sights to be seen in English football, especially when it is lit up at night. It has a great eye-catching design and is unlike anything else in the country.

The inside is functional and tidy, but not unsurprisingly lacks the wow factor of the stadium’s external appearance. It is totally enclosed and each stand has a conventional rectangular lower tier, with a semi-circular upper tier above. Situated between the two tiers is a row of executive boxes. Above the stands, there is a gap between the back of the stands and the roof to allow additional light to reach the pitch. The roofs are then topped with some diamond shaped floodlights that sit above a striking supporting tubular steel supporting structure. There is a large video screen in one corner, situated between the South and Nat Lofthouse Stands. One unusual feature of the ground is that the teams emerge from separate tunnels on either side of the halfway line. Outside the stadium is a statue of former player and legend Nat Lofthouse.

In August 2018 the stadium was renamed the University of Bolton Stadium in a sponsorship stadium. Previously it had been called the Macron Stadium and before that the Reebok Stadium when it was first opened in 1997.

Away fans are housed in the two tiered South Stand at one end of the ground, where up to 5,000 supporters can be accommodated, although the normal allocation is nearer 3,000. The lower tier is shared with home supporters, but the upper tier is given entirely to away fans. The leg room and facilities within this stand are good and the atmosphere is boosted in the home end by the presence of a drummer. Alex Smith adds; ‘away fans should note that the bottom rows of the lower tier are not covered by the roof and therefore you may get wet if it rains’. Whilst Paul Kelly warns; ‘the stewards at the stadium can be a bit overzealous, often throwing out fans for little reason. My advice to away fans is do not even think about celebrating a goal by going further forward than the front row. They’ll have you even if you’re just on the bit of track behind the adverts. Also you may be told to sit down during the game, take heed and do so. Fans have been removed who persistently stand up during the game’.

I was particularly impressed with the stadium and for the first time in this country, I felt I could have easily been sitting in a comparable stadium in the United States. The refreshment facilities are good (albeit queuing times can be long on occasion) and I wish that other clubs would copy the way that supporters in the Reebok are served. There are proper queuing barriers and exit lanes. One person takes the order and deals with the money, whilst another prepares your order at the same time. Simple when you think about it, it is just a pity that other clubs seem to think that supporters enjoy the lottery of being in the scrum that develops around the refreshment kiosk. Food on offer includes a range of Holland’s Pies; Chicken Balti, Potato & Meat, Peppered Steak, Potato & Cheese (all £3.10), Cheeseburgers (£3.90) and Hot Dogs (£3.90).

The stadium is certainly one of the best in England, although a capacity of under 30,000 means that it is on the small side compared to other stadia. There is 125 room hotel located behind the away end of the ground, 19 of which have views of the pitch. I just wonder if any of the hotel guests occupying these rooms may at some time put on their own half time show!

The Beehive on Chorley New Road is the main pub for away supporters. It is about a 10-15 minute walk away from the visitors turnstiles. The pub is of a good size that also serves food and you can park your car park there. You can also park your car there or in a car park close by (see below). I have to say that the pub is normally very good at getting people served even if it is three deep at the bar as they have a lot of serving staff. Another pub is the Barnstormers pub on Lostock Lane (from the M61, go past the stadium on your left, move into the right-hand filter lane and turn right at the traffic lights into Lostock Lane, the pub is down on the right) which does admit away fans. There is also a mixture of street parking and paid parking (at some industrial units) in this area.

Otherwise, alcohol is served within the ground, although for some games such as local derbies, the Club opts not to sell any. Alcohol available inside the ground includes; Worthington’s Bitter (£4 a pint), Carling (£4 a pint), Coors Light (£4.20 a pint) Carling Apple Cider (£4.20 a pint), Guinness (£4.20 a pint), Kingstone Press Mixed Berry (£4.40 500ml) and Red or White Wine (£4.30 187ml bottle). In another good move then the Club allows you to pre-order and pay for your half time drinks, before the game has kicked off, through the purchase of tokens. Thus making it quicker to get your hands on your interval liquid refreshments.

There are a number of bars on the nearby Middlebrook Retail Park (the Macron Stadium is on the Middlebrook Retail estate). However most of these have bouncers on the doors that only admit home fans on the production of a matchday or season ticket, There are though plenty of eating outlets on the Retail Park; KFC, Burger King, Pizza Hut, Subway and a Bolton Wanderers themed McDonalds as well as several other themed restaurants.

Development at the University of Bolton stadium isn’t exactly extensive right now but one thing the club are in the process of doing is developing a fanzone area; this will enhance the matchday offering for supporters and bring revenue into the club. In order to help fund the development, Bolton have been selling off parts of their history including their old dugout seats.

In their early days Bolton bounced around a range of different stadiums with nowhere in particular known as ‘home’. Pike’s Lane became their first real steady ground; that was seven years after their formation. 14 years later the club moved stadiums. Burden Park became their home ground and remained there through to 1997. During that time, numerous adjustments were made to the ground with the capacity peaking at 70k before financial issues and the introduction of new standards saw the capacity wind down considerably. The most notable story associated to Brunden Park is the 1946 crush disaster that took 33 fans’ lives. Post Brunden Park, Bolton moved into the Reebok Stadium. The club still play their home matches there, however, owing to sponsorship deals the name can change.

From The South
M6 to Junction 21a, take eastbound M62 leaving at Junction 12. Follow signs for M61 (Bolton/Preston) and leave the M61 motorway at Junction 6. The ground is visible from this junction and is clearly signposted.

From The North
M6 to Junction 29 and take the M65 towards Blackburn. Leave the M65 at junction two and join the M61 towards Manchester. Leave the M61 at junction six. The ground is visible from this junction and is clearly signposted.

John Walsh adds; ‘Because of traffic congestion on the M60 (formerly M62),  caused by the Trafford Centre, I would recommend that those supporters travelling from the South should take the North directions above. It is about 10 miles further but can save 30 minutes and a lot of frustration!’

Car Parking
There is a car park at the ground, but this costs £7 for cars (£12 for minibusses). Plus on my last visit, the cars in the away section of the car park were packed in like sardines, meaning that away fans leaving early (my team had just been stuffed!) couldn’t get a quick getaway as there were cars blocking them in. However a lot of the surrounding industrial estate units offer cheaper parking, usually around the £4-£5 mark. Some of these are located on either side of Lostock Lane. From the M61, go past the stadium on your left, move into the right-hand filter lane and turn right at the traffic lights into Lostock Lane. If you continue down Lostock Lane and take a left hand turn before to the Bromilow Arms, then I noticed on my last visit that there was some street parking to be had at the bottom of this road. Neil Casson a visiting Tottenham Hotspur fan informs me; ‘I’ve been to Bolton a couple of times and parked at a factory unit on Cranfield Road, which is the first right off Lostock Lane. Its the first unit on the right as you enter Cranfield Road costs £3.50 and it’s staffed for the duration of the game. Away fans are located in the South Stand, so it’s just a short walk back to your car. The official car parks seem to be well snarled up and parking I recommend parking just away from the ground if you want a quick getaway’.

Gary Lovatt adds ‘On the parking front, a handy little idea is to park at the Beehive pub which is on the roundabout (half a mile past the stadium coming from the motorway) where you pay £5 per car.’ All proceeds go to the Great Ormond Street Hospital Charity and you buy your parking ticket from the Reception at the adjacent Premier Inn. To get to the Beehive leave the M61 at Junction 6 and drive down towards the stadium. Then continue straight on past the stadium and the Beehive pub is situated at the next roundabout, on Chorley New Road.

Whilst Mark Pickering suggests; ‘St Joseph’s school on Chorley New Road offers parking on matchdays at £4 per car. On reaching the roundabout with the Beehive pub, turn left and St Joseph’s School is on the left hand side after about 250 yards. There is a pathway from the school leading down to the stadium – allowing fairly rapid entrance and exit to and from the ground.’

Dave Dallison informs me; ‘For the last few seasons, we have parked at the Brinsop Country Inn on the Chorley Road (A6), on the other side of the M61, which is about a 15 minute walk from the stadium. It costs £4 to park there, but the pub has good beer and reasonably priced food, with home and visiting fans mixing together. The big plus point is that you can easily get away after the game back onto the motorway with no problems’.

Bolton Wanderers operates a category system of ticket pricing (A, B, C & D) whereby the most popular matches will cost more to watch than the least popular ones. Category A prices are shown below with Category B, C & D shown in brackets:

Bolton are somewhat of an oddity when it comes to rivals. They have numerous games that bring additional spice to the terraces with the likes of Manchester United, Man City, Blackburn and Bury all featuring amongst them. Despite that, those teams all have others who the deem “bigger” and therefore many consider Bolton the club without a rival.

Map showing the location of the Stadium, railway station and listed pubs

The Club were formed as Christ Church FC and played at various grounds, before moving to Pike’s Lane in 1881.

The Club which had changed its name to Bolton Wanderers, played at Pike’s Lane for 14 years before moving to the Burnden Park site in 1895.

If anything is incorrect or you have something to add, please e-mail at: contact@footballgroundguide.com and I’ll update the guide.