The stadium is fully open again after an 18 month refurbishment of the Mayflower Grandstand on one side of the ground. This imposing looking two-tiered stand originally dates back to 1952, but has been totally modernised and has been given a new roof. It is slightly odd-looking in terms that it has a larger lower tier, both in width and number of rows, compared to the upper tier and that the roof extends out forwards, but is insufficient to cover the whole lower tier, including the lower-tier wings. It has a row of executive boxes located in-between the two tiers. Disappointingly it has a number of supporting pillars present at the front of the upper tier. However, the stand does look somewhat unique and is certainly very different from the other sides of the stadium, giving Home Park some character. It has a capacity of 5,403.

The other three sides of the ground are pretty uniform looking all being constructed during the 2001/02 season. They are modern and look quite smart, all being of the same height and design. Each of these stands is all seated and although covered, there is a gap between the roof and the back of these stands, which is filled with a perspex strip to allow more light to get to the pitch.  The corners in-between these three stands are also filled with seating so that the ground is totally enclosed on those sides, making an impressive sight. The teams emerge onto the field of play from one corner of the ground in-between the Mayflower Grandstand and Barn Park End.

In keeping with the naval tradition of the area, the teams emerge to the Royal Marines tune of Semper Fidelis. Home Park is the most westerly and southerly League Ground in England.

The Club have almost completed an 18 month programme of works to refurbish and expand the facilities of the Grandstand. This has included building new facilities behind the stand and replacing its roof, plus the fitting of seating to the lower terrace. Also to one side of the Stand (towards the Barn Park End) the existing small Chisholm Lounge is to be removed and in that area, new players dressing rooms are to be built. The players will then in the future enter the field of play from that corner of the stadium. The Grandstand is set to partly re-open for matches this December, with it being fully re-open for the visit of Swindon Town on 1st January 2020. Once completed the capacity of Home Park will rise to 18,600, with Grandstand having a capacity of 5,403. Special thanks to Greensonscreen and Matthew Heffernan for providing the photos of the progress works of the refurbishment of the Grandstand at Home Park.

Away fans are housed on one side of the Barn Park End, which is all seated and covered. As you would expect from a modern stand the facilities and views of the playing action are both good. The normal allocation for visiting supporters in this area is 1,300 seats, although this can be increased to 2,022 if demand requires it. The Plymouth fans situated to the right of the away section are separated by an area of netting. Their close proximity does lead to a lot of banter, but although Plymouth fans are passionate about their club, it is mostly in a non-intimidatory manner.

The atmosphere is generally good inside the ground and the stewarding laidback and unobtrusive. The only downside is that the concourse can get a bit cramped, especially if there is a large away support in attendance.

Plymouth haven’t always had a home ground. They had to play all their games at their opponent’s grounds at first because they did not have a place of their own. It wasn’t until 1887 they found a home in the Mount Gold area but that only lasted two years. The Pilgrims then relocated to a new home pitch on the edge of the city. The Marsh Mills stadium became Plymouth’s ground for the next decade.

In 1901, the Pilgrims settled at Home Park. It hasn’t been plain sailing though because their stadium was battered by German bombers during World War 2. It was rebuilt after the war though and reopened just in time for the restart of football. Things remained fairly stable at Home Park after that but major constructions works were completed in the early 2000s before the Mayflower Stand was rebuilt more recently (in 2018).

Probably the best bet is the Britannia which is a sizeable Wetherspoons outlet and around a 10 minute walk away from the ground (from the car park outside the football ground, turn left and the pub is down the road on the right hand corner). For most matches the pub which is busy normally, has a queue of fans waiting to get in outside, but this is controlled by the security staff, so you don’t normally have to wait too long to gain entrance. Although away fan friendly, the pub doesn’t tolerate away supporters singing their clubs songs and any who do are quickly ejected from the premises, so you have been warned. This pub is also listed in the CAMRA Good Beer Guide.

Near to the pub is normally a van selling pasties, which looked to be doing a roaring trade on my last visit. Opposite the Britannia is the Embassy Club which is best avoided by away fans. Around a 15 minute walk away from Home Park (going back in the direction of the A38) is the Cherry Tree pub on Ham Drive. A similar distance away (but going in the opposite direction across the Park) is the Hyde Park Social Club which welcomes visiting supporters (see advert below). Otherwise, alcohol is available within the ground.

Around a 15 minute walk away from Home Park on St Gabriel’s Avenue is the  Hyde Park Social Club. This friendly Club which welcomes visiting fans for Saturday matches from 11am and after the game as well, shows Sky and BT Sports. The club has a range of draught beer, cider and lager on sale such as Carling, Worthington, Thatchers, Guinness, Wolfrock, Carling Dark Fruits Cider and Offshore Pilsner. In addition, a range of hot food is available too. For coach parties then cooked breakfasts can be supplied at a reasonable price, but must be booked in advance (see contact details below). The Club has a pool table and is family-friendly. Limited free parking is available at the Club itself, or alternatively, there is on-street parking in the local area. The Club charges £2 for a weekend pass to enter, including on matchdays (kids accompanied by an adult are admitted free).

Hyde Park Social Club can be found at: 5 St Gabriel’s Avenue, Peverell, Plymouth, PL3 4JQ (Location map). Tel: 01752 662947. Club affiliated Coaches can drop off nearby on Hyde Park Road, but please advise Steve Lavis in advance by emailing  s.lavis297@btinternet.com. Similarly, contact Steve if you wish to attend the Club before a midweek match.

Take the M5 to the South West and at the end of the motorway continue onto the A38 (The ground is well signposted from the outskirts of Plymouth on the A38). On entering Plymouth, turn left onto the A386 (towards Plymouth). When this road splits into two, keep on the left hand side (again signposted Plymouth) and after about a mile you will see the ground on your left. The ground is well signposted ‘Plymouth Argyle Home Park’ on the way into Plymouth.

There is quite a large car park at the ground, which is free. However, this facility is now shared with a Plymouth City Centre ‘Park & Ride’ scheme, which means on most Saturday afternoons the car park is normally full before 1pm. Also, it can take some time (up to 30 minutes) to exit after the match has finished. Alternatively, there is another large car park at the nearby Plymouth Life Centre, which is free to use. As you go past Home Park on your left and then the Life Centre, go through a set of traffic lights and at the next traffic lights turn left (signposted Life Centre) for the car park. But again this car park fills up quite early and especially if there is an event also going on at the Life Centre. Please note that both these car parks are under the control of the local Council and if vehicles are not parked correctly in the marked bays, then you may end up with a £75 parking ticket for your trouble. So please don’t think about parking on a grass verge etc.. The Council Parking Wardens are out in force on matchdays, so you have been warned. Alternatively, there is some street parking on roads off Segrave Road (opposite Home Park), or on side roads off the main Outland Road (A386), heading away from the city centre towards the A38. There is also the option of renting a private driveway near Home Park via YourParkingSpace.co.uk.

Plymouth Railway Station is about one and a half miles away, so either grab a taxi or embark on the 20 minute walk. As you come out of the station turn right and down the hill and under the railway bridge. Just keep walking straight along this road (A386) and you will eventually reach the ground on your right.  Alternatively (except for night games) then Andrew Chapman suggests a more picturesque route: ‘Finally I would recommend turning right into Central Park Avenue, at the roundabout just downhill from the station on the A386. Then take the second left into Holdsworth Street, which will lead you up a steep hill into Central Park, where you’ll see the ground as soon as you reach the top of the hill. It is a lot nicer route than following the roads – after all (apart from Aldershot) there are no other league clubs situated in a public park!’ Chris Bennett adds; ‘ It’s a much nicer walk than going up Alma Road and quicker as well’.


* These ticket prices are for tickets purchased prior to matchday. Tickets bought on the day of the game can cost up to £2 more. Please also note that for more popular games the club increase the basic ticket prices by up to £3 more ie Adults £24, Over 65’s and Students £19 and £10 for Under 18’s.

** Family tickets are only available in the Family Enclosure and away stand. Family tickets bought on the day of the game cost £4 more (an additional Under 18 ticket rises to £8).

Plymouth vs Exeter rivalry: Clashes between Plymouth Argyle and Exeter are anything but peaceful events. Meetings between these sides are called the Devon derby due to both sides being based in the county of Devon and, given there are limited teams in that area, the matches can bring a fair bit of spice to Plymouth’s ground.

Plymouth vs Portsmouth rivalry: Although not as fierce as their rivalry with Exeter, Plymouth consider Portsmouth to be a significant rivals; a lot of that is owed to their roots on the coast. Meetings between the two are known as The Dockyard Derby or Battle Of The Ports.

Plymouth vs Bristol Rovers rivalry: These two teams are not neighbours, so this isn’t a derby like most of the rivalries on this list. Despite the 120 miles separating both towns both sets of fans share a genuine dislike for each other; it’s not actually that clear why though! 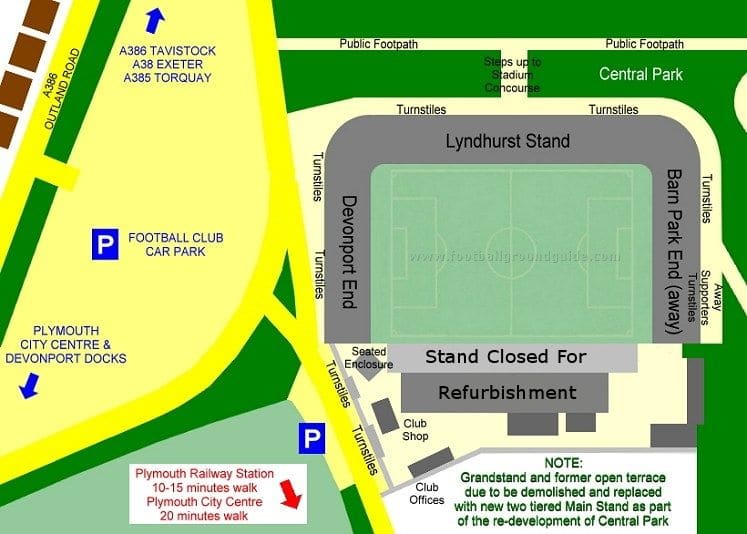