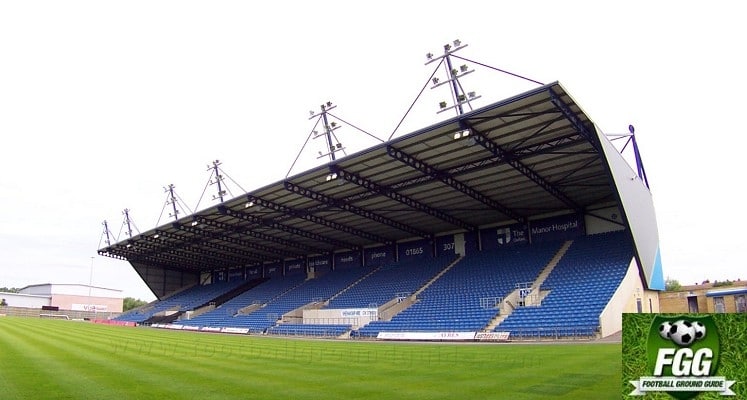 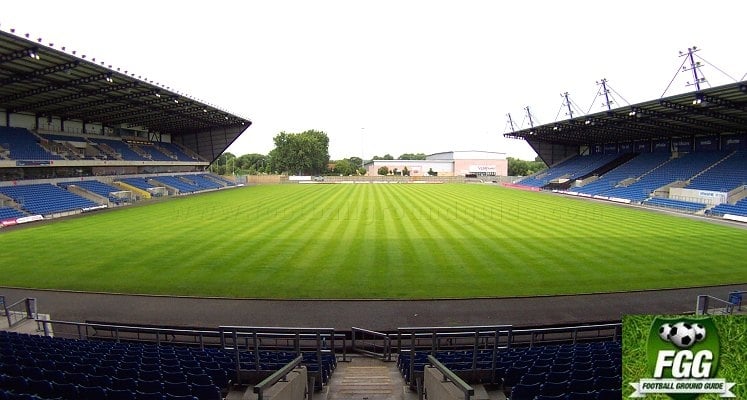 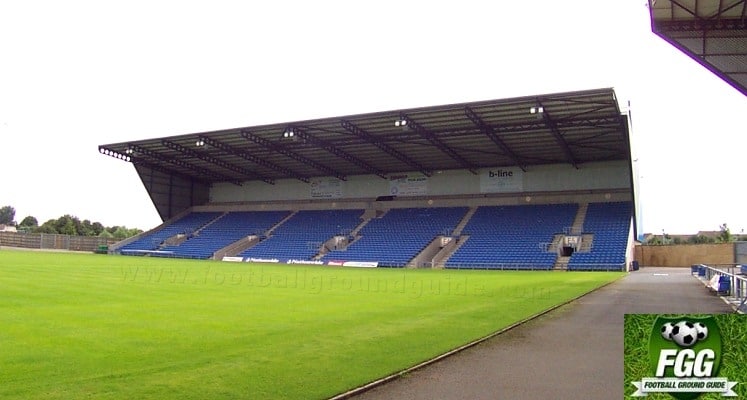 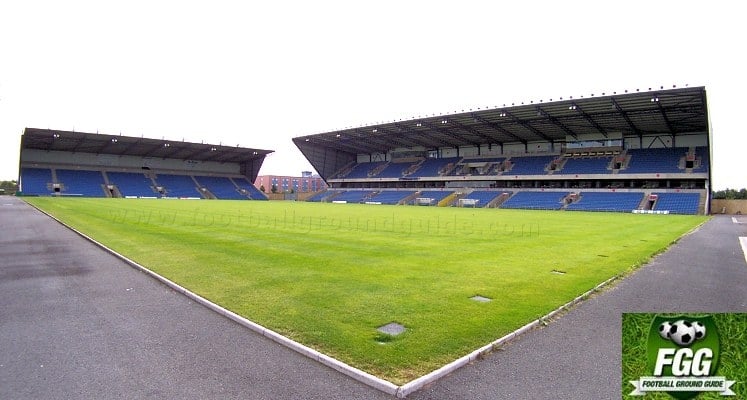 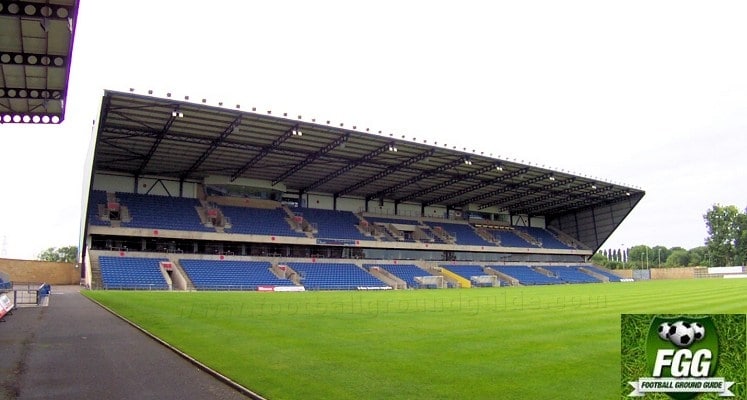 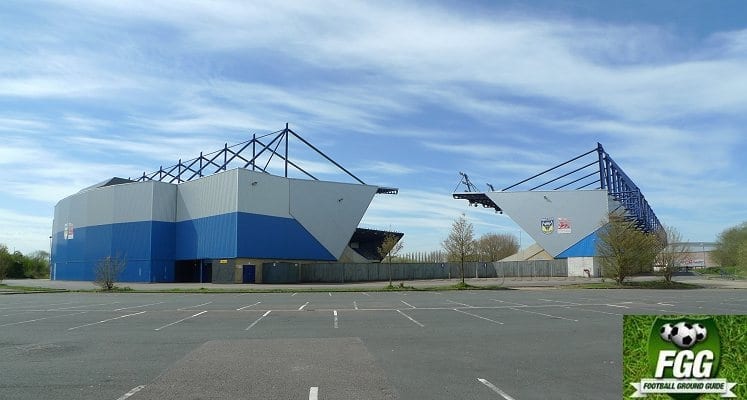 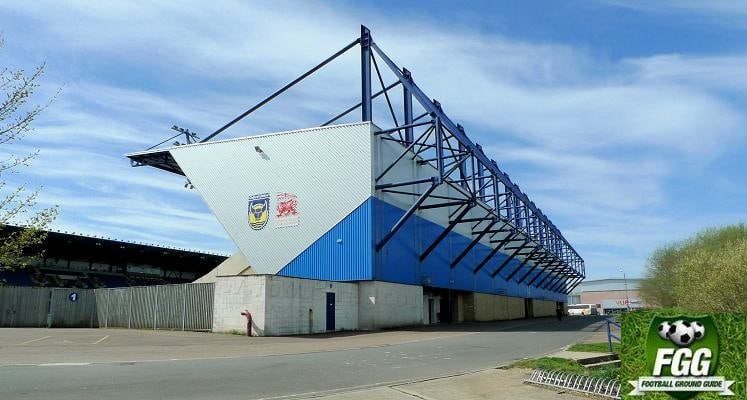 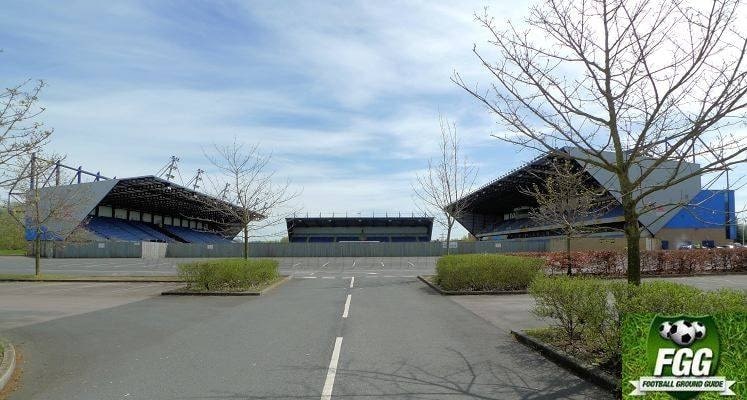 The club moved to the Kassam Stadium in 2001, after leaving the Manor Ground, which had been its home for 76 years. The stadium is named after the former Club Chairman Firoz Kassam and is located on the outskirts of Oxford. It has only three sides, with one end remaining unused. Each of the stands is of a good size, are all seated, covered and are roughly of the same height. The South Stand on one side of the pitch is a two-tiered stand with a row of executive boxes. This is a particularly impressive looking stand with police control and press boxes situated at the back. Opposite is the single-tiered North Stand, primarily given to away supporters. This has a number of strange looking floodlights protruding from its roof. At the one end is the Oxford Mail Stand, which is also single tiered. There is a special type of pitch, one of the first to have artificial grass woven into the live turf. One disappointment is the large gaps in the corners, which sets the stands back from the playing surface and means cold winds whistling through in winter. Outside the stadium at the West End, there is a statue of an Ox.

The Club have received planning permission for a fourth stand at the current unused end of the Kassam Stadium. It is likely that this will be temporary in nature and will have around 735 seats. It is expected that it will be put in place sometime during the 2016/17 season.

Away fans are normally housed on one side of the North Stand, towards the open end of the ground. This stand may be shared with home supporters, or if demand requires it, then the whole of this stand can be allocated providing just over 5,000 seats in total. The facilities within and the views of the playing action are excellent, and there is also good leg room. The atmosphere within the ground is not bad, with the home fans in the Oxford Mail Stand doing their best to raise it. There is not much around the ground in terms of pubs and eating establishments, although refreshments inside the stadium are okay, although if there is a large away support, then it can take quite a while to get served. Refreshments on offer include: Cheeseburgers (£3.80), Burgers (£3.40), Hot Dogs (£3) and a selection of Pies produced by Chunk of Devon; Steak & Kidney, Steak & Ale, Chicken & Mushroom, plus 'Pie of the Week' (all £3.50) as well as Traditional Pasties (£3.30), Cheese & Onion Pasties (£3.30) and Sausage Rolls (£3). With one end of the ground being open, there is always the remark 'of watch my car' as another wayward shot flies into the car park behind. On the whole, I found the Kassam Stadium to be an enjoyable and largely friendly day out. Turnstiles open at 1.30pm for Saturday matches and at 6.45pm for midweek evening games.

Derek Fennel a visiting Blackburn supporter adds; 'the stewards at the Kassam seemed very helpful and accommodating which led to a feeling of watching the game in a relaxed frame of mind. There was great vocal support from the home supporters who really got behind their team'.

There are no pubs in close vicinity to the stadium There is a bar in the nearby Holiday Inn Express Hotel, but this no longer allows in away fans. Kim Rockall informs me; 'There is a cinema and bowling alley complex located adjacent to the stadium, called Ozone. Inside the bowling alley there is a bar, which also has Sky television and a fast food outlet'. There is also on the complex a Chinese buffet restaurant called Oxy Oriental, as well as a fish and chip shop called the Ozone Plaice.

Dave Langford a visiting Northampton Town fan tells me; 'I found a small local pub called the George Inn, situated in Littlemore just off the ring road (not far from Sainsburys). It had a number of television screens showing the early kick off and we were served fairly quickly. The Oxford fans at the pub made us very welcome and the landlord suggested that I leave my car in the pub car park for the duration of the match as the stadium was only a ten minute walk away. There were assorted pies and sausage rolls available. All in all a good find.' Also in Littlemore is the British Legion Club (OX4 4LZ) which also welcomes away fans. You are also able to park your car there for the duration of the game. Please note though that for certain high profile games (on Police advice) that both the pub and Club do not admit visiting supporters.

There are also a couple of other traditional pubs located in Sandford-on-Thames, which is in walking distance (20-25 minutes) of the Kassam Stadium or a five minute drive. These are the Catherine Wheel on Henley Road and the Kings Arms on Church Road. The Catherine Wheel offers local real ales and cider, plus hot food snacks on matchdays. Whilst the Kings Arms is in a splendid location on the banks of the River Thames and is part of the Chef & Brewer chain.

Otherwise, alcohol is also served within the ground in the form of Carlsberg Lager, Tetley's Bitter, Guinness and Somersby Cider (all £4). Although for some high profile matches the Club opt not to sell any.

All Bundesliga matches at their iconic 75,000 capacity Allianz Arena are sold-out, but Nickes.Com can put together your perfect dream trip to see them play fellow German giants Schalke 04 in February 2018! We will arrange a quality city centre Munich hotel for you as well as coveted match tickets to the big game. Prices will only rise as matchday looms closer so don’t delay! Click here for details and online booking.

Whether you are a small group planning a dream sports break or seeking wonderful hospitality for your company clients, Nickes.Com has 20 years of experience in providing unforgettable sporting trips. We offer a whole host of packages for the Bundesliga, La Liga and all major leagues and cup competitions. Book your next dream trip with Nickes.Com!

The Kassam Stadium is quite well signposted from the main routes into Oxford, with brown football signs pointing the way. The stadium can be found in between the Oxford Science Park & Blackbird Leys Estate. From the A423 Ring Road, take the A4074 towards Reading. After the roundabout with Sainsbury's on one corner, take the left turning signposted Cowley/Wallington/Oxford Science Park and you eventually come to the ground on your left.

There are 1,600 car parking spaces at the stadium itself, which are free. However, the car parks tend to fill up fast, so try and arrive early if you can (at least 75 minutes before kick off). An additional 400 car parking spaces are now available at the Ozone cinema and bowling alley complex adjacent to the stadium, which are also free to use. John Attwood a visiting Gillingham supporter adds; 'when arriving at the stadium, ignore the first stadium car park entrance that you come to and go up to the second entrance as the first will have you parking at the "open" end. There is a roundabout by the second entrance, which will take you back to the first entrance if the other half is full. I was also heavily delayed in trying to leave the car park after the game as there were only two exits available'. If you do end up arriving late at the stadium and find that the stadium car parks are full, then don't get tempted to park on a grass verge as you may well end up with a parking ticket for your trouble. There is also some street parking available along Grenoble Road (going away from the stadium), just make sure you use the marked bays. There is also the option of renting a private driveway near the Kassam Stadium via YourParkingSpace.co.uk.

Oxford Railway Station is over four miles from the ground and it is really not advisable to try to walk it. Ross Hitchcock informs me; 'Oxford Bus Company/Stagecoach route 3A runs half hourly from the city centre (Westgate stop E1 and High Street stop T2), Iffley Road and Sandford-on-Thames direct to the ground on Saturdays only. Return and day tickets bought from one operator can be used to return on the other. Plus Bus tickets are valid.

From stop R2 at the railway station Stagecoach route 1 and Oxford Bus Company route 5 run at frequent intervals (combined every 4-5 minutes on Saturday and 7-10 minutes evenings and Sunday) throughout the week to Knights Road in Blackbird Leys, a short walk from the ground. Buses take approx 35 minutes to Knights Road. Return and day tickets bought from one operator can be used to return on the other. Plus Bus tickets are valid.

Other services from the city centre which stop a short 5-10 minute walk away from the ground are Stagecoach routes 12 (at Plover Drive in Greater Leys) and 16 (at Carpenter Close in Minchery Farm)'.

You can get the Oxford Bus Company Service, Number 3A which on Saturdays only runs to the Kassam Stadium via Sandford-on-Thames. The fare for an Adult is £3.50 return, or £1.70 return for a child. It departs from bus stop S2 which is located in Speedwell Street in the City Centre. See the Oxford Bus Company website for timetables.

Ed Murray adds; 'I visited the Kassam Stadium for a Tuesday evening game, I took the number 5 bus from the station just before 7pm and, even though the traffic was fairly light, I didn't arrive at the ground until 7:50pm. Coming back after the game, it still took more than half an hour. So it may be an idea to allow yourself plenty of time if you are going to travel in this way.'  Tom Raffan a visiting Southend United fan advises; 'It's worth noting that the bus from the train station takes a very windy, indirect route so if intending to get the bus from the station then get there by 1.30pm at the latest (for a 3pm kick off).

In October 2015 a new railway station serving Oxford was opened. Called Oxford Parkway it is served by trains from London Marylebone. Although it is located on the other side of Oxford to the Kassam Stadium, it does have good bus transport links into Oxford City Centre. It is planned that in December 2016 rail services will begin to operate from Oxford Parkway to Oxford.

Official Programme £3
The Club offers a version of the programme, specifically for away fans.

Oxford Hotels - Find and Book Yours And Help Support This Website

If you require hotel accommodation in Oxford then first try a hotel booking service provided by Booking.com. They offer all types of accommodation to suit all tastes and pockets from; Budget Hotels, Traditional Bed & Breakfast establishments to Five Star Hotels and Serviced Apartments. Plus their booking system is straightforward and easy to use. Yes this site will earn a small commission if you book through them, but it will help towards the running costs of keeping this Guide going.

Map showing the location of the Kassam Stadium and listed pubs 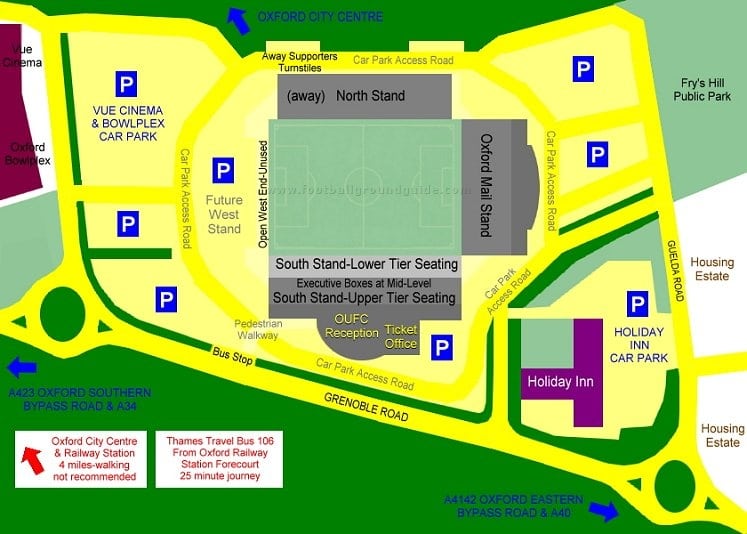