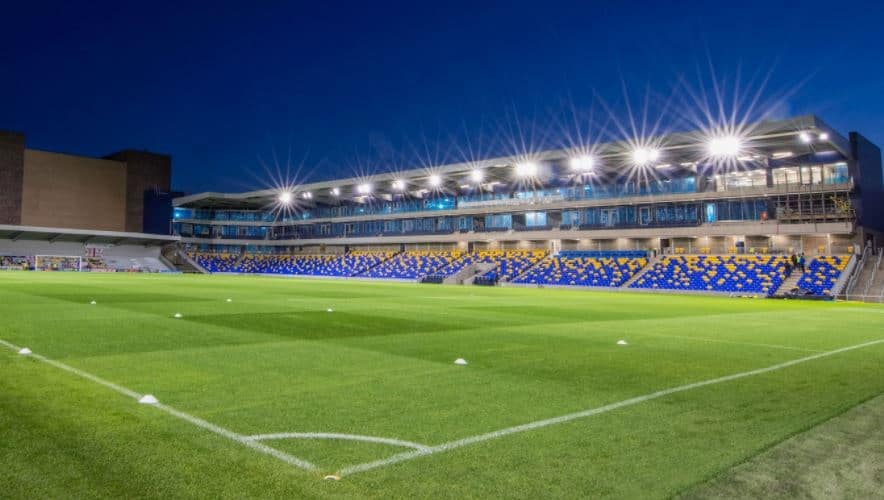 Plough Lane is widely considered as the spiritual home of AFC Wimbledon. The club finally made a return to their spiritual ground in 2020 after having made a return to competitive action in 2002. After having begun construction on 2019, the ground finally opened in November 2020. As with any other modern stadium, Plough Lane manages to bring excellent facilities in almost every regard. The ground comes with a familiar setup with four individual stands. The seats have a mix of blue and yellow. The East stand has the AFC Wimbledon’s nickname ‘The Don’ written prominently with a 3-D effect.

Even though the original Plough Lane was a difficult ground for visiting supporters, the new ground is a lot easier in terms of its approach. The North stand of the Plough Lane will be used for the purpose of accommodating the opposition supporters, who will get access to a world of facilities and advantages in this new ground. There is sufficient space for 800 banqueting and conferencing spaces, which makes it the largest in the borough. The visiting supporters should also be able to reach the stadium quite comfortably due to its close proximity to the bus stops and London underground stations.

When AFC Wimbledon were formed in 2002 they didn’t have the luxury of picking and choosing a stadium. Instead they had to settle for using the Kingsmeadow Stadium; it was the former ground of semi-pro side Kingstonian. It wasn’t until 2014 that the return to their true home – Plough Lane – looked like it could one day become a reality. That was only when planning was sought though; it wasn’t until three years later that buildings works got underway. The club eventually returned to action at Plough Lane in 2020.

The Plough Lane can be reached using the A24 if you are heading from the southern end. For those coming from the west of London, the M3 or M4 would be a better pick. Just like any other place in London, it might be difficult to find a parking spot just outside the ground. For those coming through taxis, it is better to be warned about the exorbitant prices, which may go up even further in the event of a traffic jam. The cost to get to the AFC Wimbledonground from the London Heathrow airport may be as high as £50 using a taxi.

AFC Wimbledon’s Plough Lane is connected extremely well through a number of London underground systems and bus stops. The bus routes that will pass through the ground would be 156, 77, and 493. If the user wants to take a train, they can reach the Thameslink station. It would take around 45 minutes from the Waterloo and London eye landmarks. The tube ride to get to Plough Lane is around 50 minutes on average from different regions. One has to look for the District and Northern lines. The Tooting Broadway Station is the best option when using the Northern line, while the Wimbledon Park is the best pick when using the District line.

AFC Wimbledon will soon put up information about the ticket prices. Once the details are available, these would be updated here. The AFC Wimbledontickets will be priced at around £20 for a member, but these would be largely dependent on the seating option.

AFC Wimbledon vs MK Dons rivalry: Ask anyone associated with AFC Wimbledon what club they hate and the answer can be guaranteed; MK Dons. MK Dons are seen as the creation that ripped the soul out of Wimbledon. The fans wouldn’t just go along with it though and created a new club, AFC Wimbledon, and a fierce rivalry was born.

AFC Wimbledon vs Crawley rivalry: This derby match is not nearly as hate-filled as the MK Dons one but there is still a litte extra spark to their encounters. Why? Well, it all dates back to the non-league days when they battled for promotion on a frequent basis.

AFC Wimbledon Fixture List (redirects you to the BBC site)

As a modern stadium, Plough Lane has a good number of facilities for disabled spectators to find their way with ease. For starters, the wheelchair accessible seats are spread across the ground. These are also accompanied by relatively easy access to the toilet facilities. The parking outside the ground also has dedicated spots for disabled fans.

AFC Wimbledon has not yet provided any details about the availability of stadium tours. Once these details are known, it will be updated here. These stadium tours will involve a trip down the memory lane aside from being able to look at the modern facilities like the new dressing rooms, dugouts, and more.