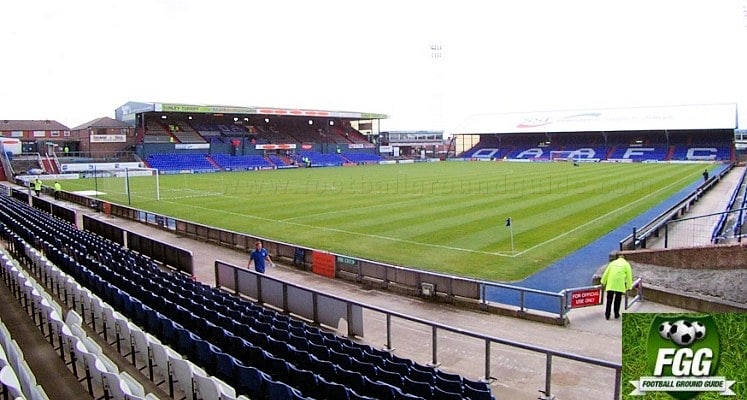 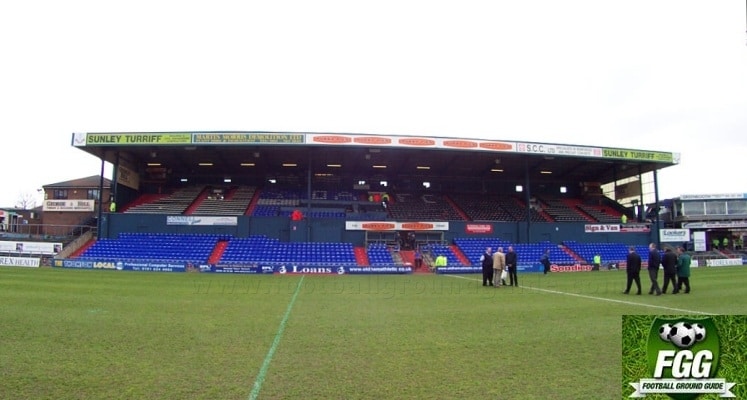 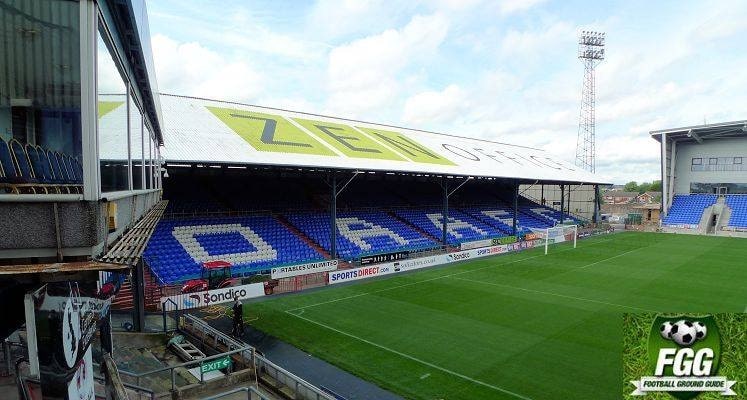 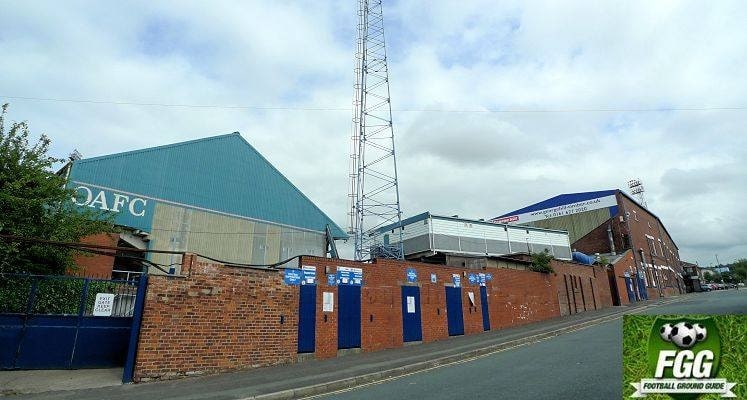 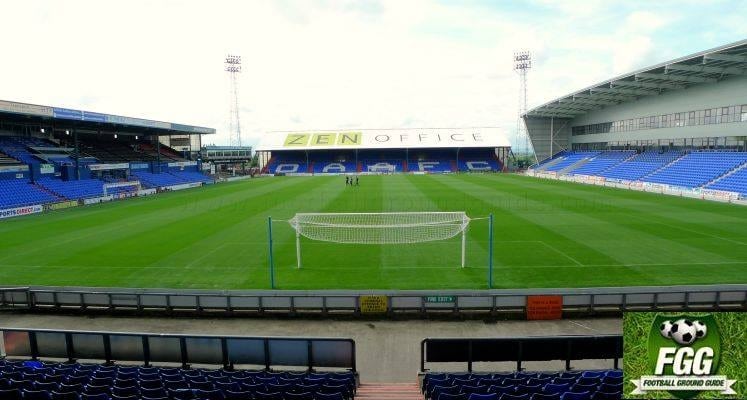 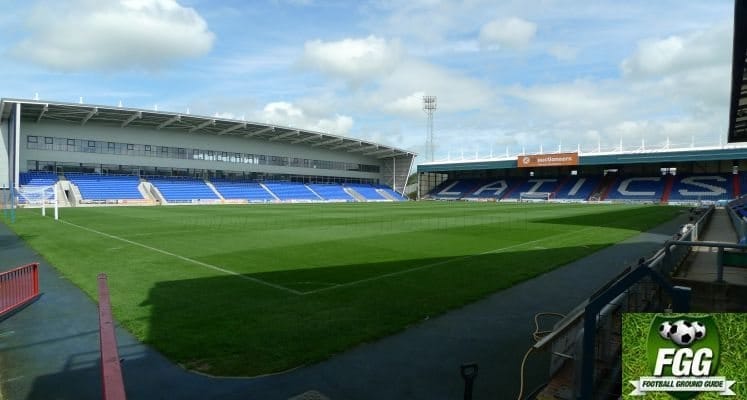 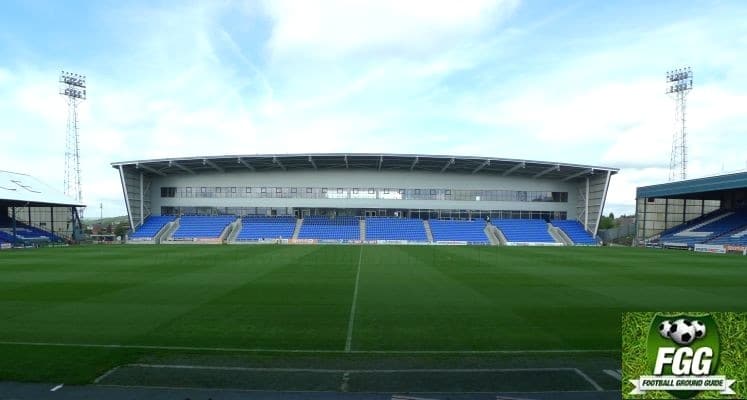 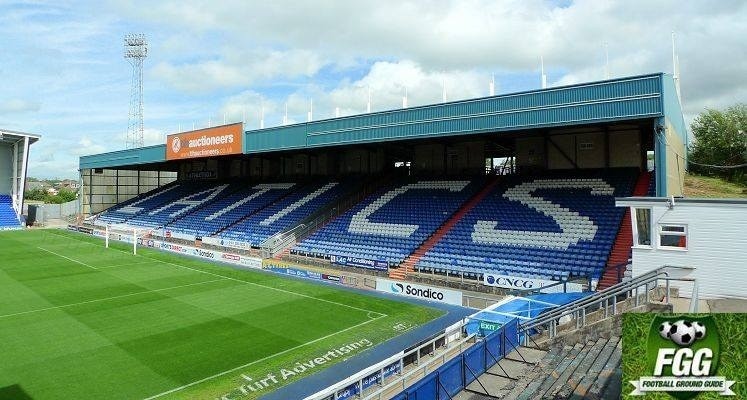 The look of Boundary Park has been greatly enhanced with the opening in 2015 of the new North Stand on one side of the ground. Now named the Joe Royle Stand after the Club’s most successful manager, it is pretty smart looking both inside and out, and is of a good size, being the tallest at the stadium. It has a single tier of seating that comprises 2,340 seats. Above this area is a large panelled back wall that encompasses corporate hospitality areas, club offices, and exhibition space. This is all located below a slightly curved roof that has two large windshields to either side.

At one end is the comparatively new Jimmy Frizzell Stand, which is named after a former Oldham player and manager. This is a good sized all-seater covered stand which enjoys excellent views of the pitch. It has windshields to either side and an electric scoreboard on its roof. During 2015 some additional seating was installed in this stand, filling a gap that had been previously placed there to separate home and away sections. The other end, the ZenOffice Stand (also known as the ‘Chaddy End’), is a medium-sized all-seater covered stand, that houses the away supporters. Again there are windshields to either side, but the elderly nature of this stand is apparent from the supporting pillars running across the front of it. On one side there is the old two-tiered George Hill Main Stand. This used to have terracing in front but has since been filled with seating. There is still some old unused terracing on one side of this stand. The ground also benefits from four large traditional floodlight pylons, leaving the visitor in no doubt that this is a football ground.

Away fans are housed in the ZenOffice Stand (Chaddy Road End) at one end of the ground. This stand has a capacity of around 3,750 fans. This is the opposite end to where the away fans have been housed for many years and has caused some upset with some Oldham supporters, as this was always seen as the traditional ‘Home’ end.  Although covered, the ZenOffice Stand does have a number of supporting pillars running across the front of it, which could impede your view of the action. If you get chance, make sure to try one of the pies; Cottage, Steak & Pepper, plus Cheese & Potato (all £3). Some fans reckon that this is the best part of a visit to Boundary Park! Make sure you wrap up well though as the location of Boundary Park on the edge of the Pennines, means that it always seems to be cold, with a biting wind that goes right through you. Generally a friendly day out.

Chris a visiting Plymouth Argyle fan adds; ‘Boundary Park is easy to find from the tram which takes about 20 minutes to walk. The Oldham staff are friendly and we experienced no issues even with a fairly large away following for our division. The away end catering is all outside so wrap up well with the bar being a couple of fold up tables and a barrel of lager which is poured direct. One lager only. But again the service is cheerful. There are some supporting pillars at the away end that impede the view and don’t sit too far back or the roof stops you seeing the far end of the pitch. A good day out with a friendly club but a ground that’s seen better days’.

There are currently no stadium developments in the public domain.

Oldham started off their existence playing at the generically named ‘Athletic Ground’ but very quickly moved into Boundary Park. That move occurred in 1904. Despite the age of the stadium, the only major renovation that has taken place didn’t happen until 2014. Those works saw the north stand redeveloped along with some further commercial space to boost the club revenue. 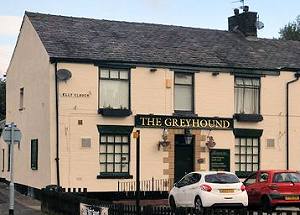 The closest pub is the Clayton Green, which is a Brewers Fayre outlet and can be found two hundred yards from the corner of the Main Stand and the Chaddy End, on Sheepfoot Lane. There is also the Greyhound Inn, which is across Broadway down Holden Fold Lane. This pub welcomes visiting fans, shows Sky and BT Sports, offers real ale (it is a J W Lees pub), serves freshly cooked food and is family friendly. It is also has a large car park which can accommodate coaches. The pub is around a 10 minute walk away from the visitors turnstiles.With the visitors entrance behind you, turn left and walk on up the road running along the back of the old Main Stand. Just past the end of the Main Stand turn left to go through the club car park, walking behind the stadium then turning left through the car park in front of the new stand. Walk across the car park and out of the car park entrance and up through the small residential area and this will bring you out at the main Broadway Road. Cross over the Broadway Road and turn left, walk down the hill a little way and opposite the small open car park, turn right into Netherhey Lane and then bear right onto Holden Ford Lane. You will reach a mini roundabout and the pub is right in front of you.  The address of the pub is 1 Elly Clough, Holden Fold Lane, Royton, Oldham OL2 5ES (Location Map), Telephone: 07711063597. The pub can also be found on Facebook.

Also around a 15 minute walk away from Boundary Park is the Spring Vale Inn, on Burnley Street (by Asda) which also shows Sky Sports. Located on Oldham Road is the White Hart Pub.

Alcohol is also sold to away fans inside the ground, albeit from a separate kiosk to food.

Leave the M62 at Junction 20 and take the A627(M) towards Oldham. Take the second slip road off the A627(M) following the signs for Royton (A663). At the top of the slip road you will find a large roundabout that on the left has a McDonalds and a KFC. Take the second exit onto the A627 towards Oldham/Oldham Royal Hospital. After passing a Vauxhall Garage and Clayton Green Brewers Fayre pub (which is used by away fans), turn left at the traffic lights. Follow the road around to the right and with the B&Q store in front of you, bear left onto Westhulme Way which leads into Westhulme Avenue. You will then reach on the right an entrance to the Oldham Royal Hospital where matchday parking is available at a cost of £5, otherwise continue along to the end of the road to reach Boundary Park. Please note that parking at the ground itself is for permit holders only. There is also the option of renting a private driveway near in the local area via YourParkingSpace.co.uk.

The closest Metrolink station to Boundary Park is Westwood which is around a 15-20 minute walk away from Boundary Park, whilst the nearest railway station is Mills Hill, which just over a two miles away from Boundary Park and a 40-45 minute walk. Both these services depart from Manchester Victoria. Whilst the Metrolink also has a number of other pick-up points in Manchester City Centre and takes around 21 minutes, the train to Mills Hill takes around 8-10 minutes. Tickets need to be bought prior to getting onto the Metrolink. Currently, it costs £3.80 for an adult return ticket from the Manchester City Centre to Westwood.

If arriving from the South at Manchester Piccadilly railway station, then catch an Altrincham or Eccles bound tram from the adjacent Metrolink station and change at St Peters Square. Then take a Rochdale bound tram to Westwood. If your train ticket takes you through to Oldham then the cost of the Metrolink to Westwood is included.

On exiting the Westwood Metro Stop turn left along the main road and at the traffic lights turn right into Featherstall Road. You will reach a roundabout outside a large Tesco’s store where you proceed straight on. At the next roundabout take the first exit in the direction of Rochdale/M62. Follow the pathway beside the dual carriageway and when you reach the traffic lights with a B&Q store on your right, cross over at the lights onto the other side. At this point you can clearly see the floodlights of Boundary Park in the near distance. Go up the road between Pentagon and the B&Q and then take the next left into Boundary Park Road. This brings you out near to the away end of the ground.

George Sutcliffe a visiting Sheffield United fan informs me; ‘On leaving Mills Hill station descend the ramp then turn right. Then bear left into Haigh Lane which becomes Chadderton Hall Road and then Burnley Lane (although it is the same road) this takes you to the Toby Carvery at the M627 roundabout from where the ground is visible. Apart from a handful of Blades and a few Manchester based Latics hardly anyone took this route. There was also a large JW Lees pub called the Rose Of Lancaster on Haigh Lane 200 yards from Mills Hill Station which served food and had Sky Sports’. It is around a 40 minute walk.

By Bus From Manchester Piccadilly

Jeff Banfield a visiting Newport County fan adds; ‘You can also get a bus from near Manchester Piccadilly Station to Oldham Royal Hospital, which is only a 5-10 minute walk from Boundary Park. Leave Manchester Piccadilly Station from the front exit. Walk straight down on the right hand side path. Continue until you see a statue of Wellington on the opposite side of the road. Then turn right into Oldham Road. Crossover to bus stop E. Take the Number 182 bus to Oldham Royal Hospital. The journey time is around 25 minutes. To return to Manchester take the bus from stop B, opposite the hospital. For Bus timetables visit the Transport For Greater Manchester website.

Bjorn Sandstrom adds; ‘Please note that for weekday games, Bus 181 is the only one of the three that you can catch back to Manchester Piccadilly Gardens. It passes the area near Boundary Park at 21.40.’. Matt Lambo informs me; ‘On weekdays there are later buses that still travel to Manchester but you have to catch them from Oldham town centre which is about a mile away from the ground (turn right out of the away end, left up to the top of the hill, then turn right for the town centre).

* Please note that these ticket prices are for those purchased before matchday. Tickets bought on the day of the game can cost up to £4 more per adult ticket and £2 extra, per concession ticket. Under 16’s and Under 12’s ticket prices remain unaffected.

Students can also qualify for a concessionary price, providing that they first become club members.

Oldham vs Rochdale rivalry: There are only six or seven miles between these two clubs so, naturally, there can be quite the swirl of animosity when they face off.

Oldham vs Bolton rivalry: Oldham and Bolton have gone to war a few times over the years and with less than 30 minutes between them it’s fair to say bragging rights are in the line