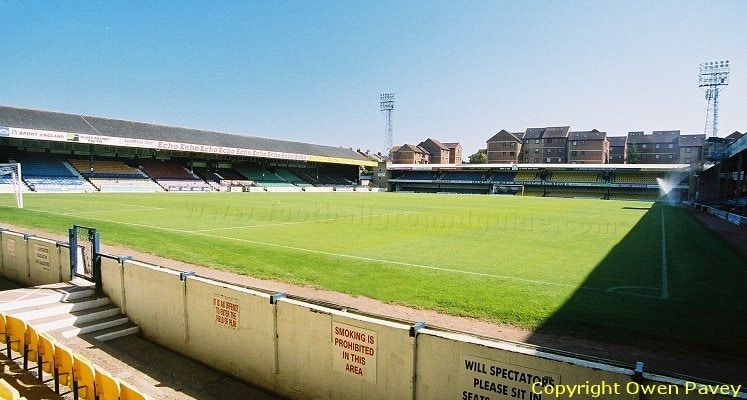 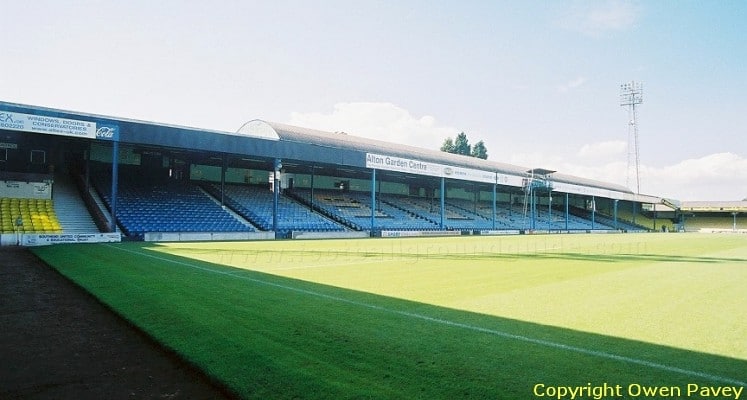 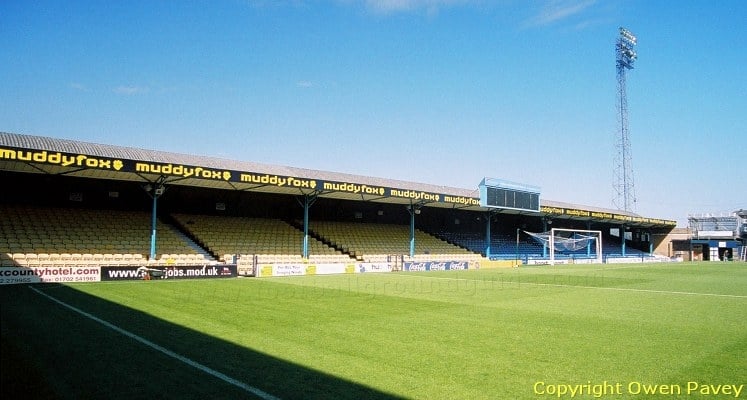 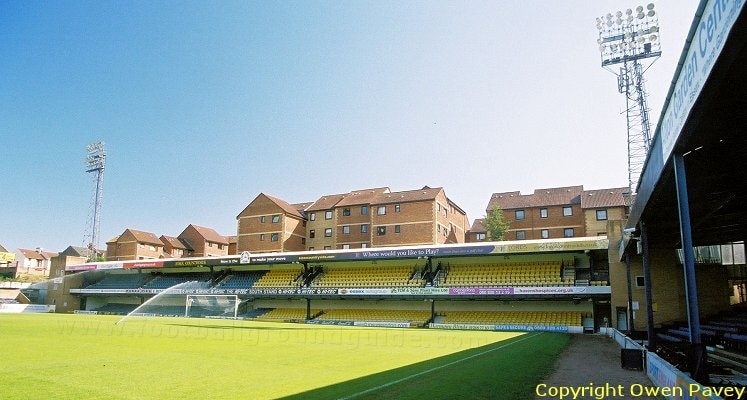 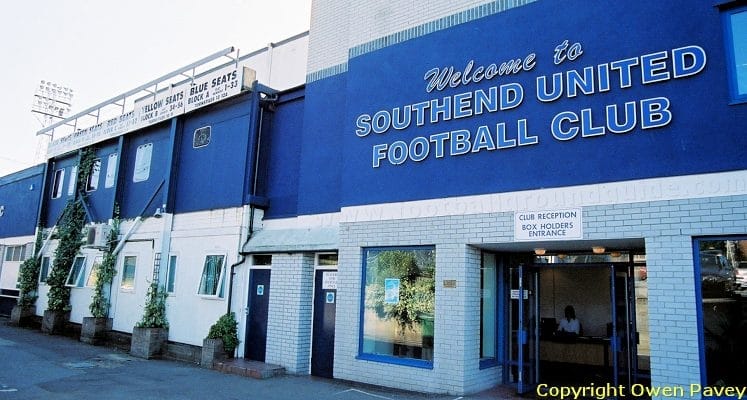 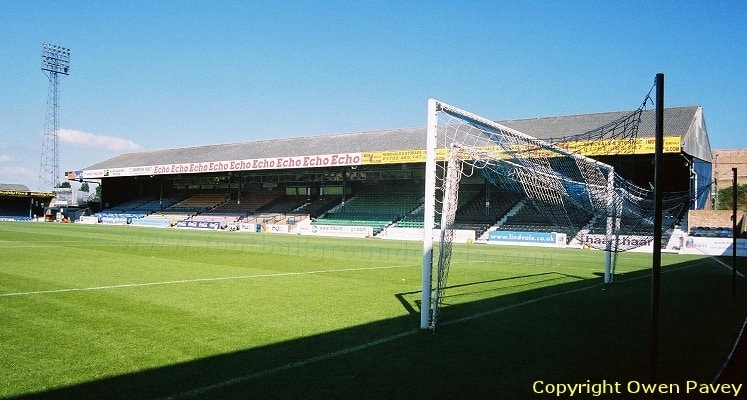 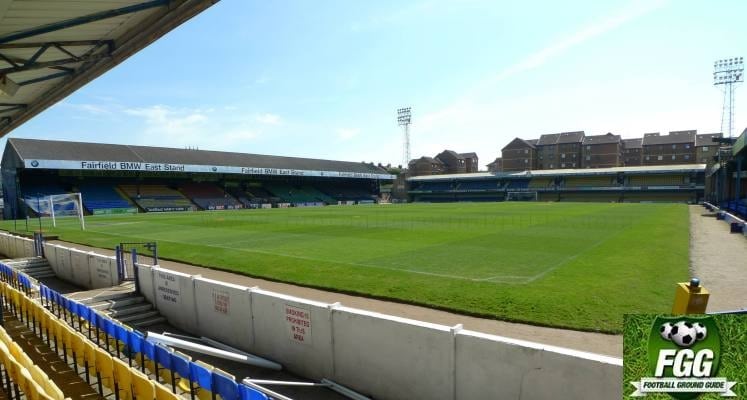 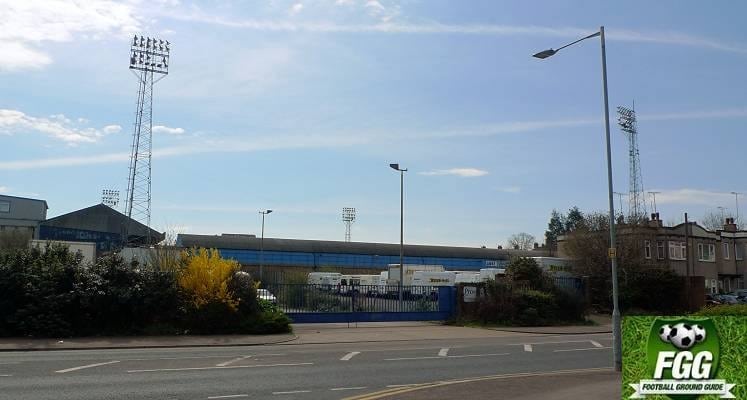 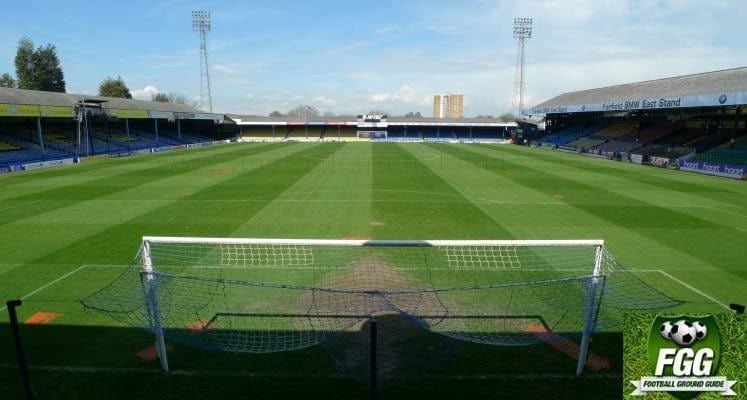 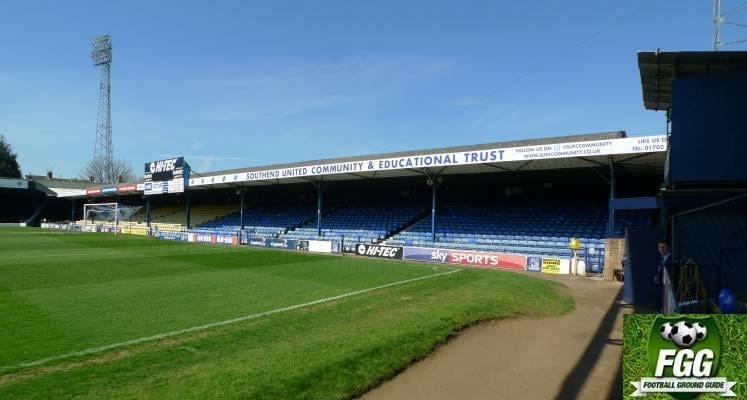 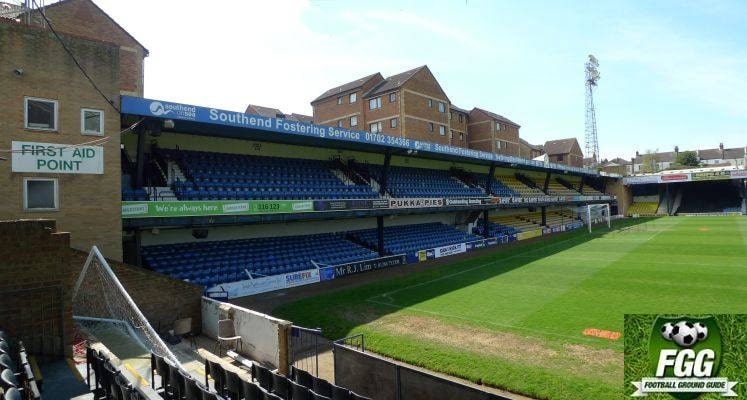 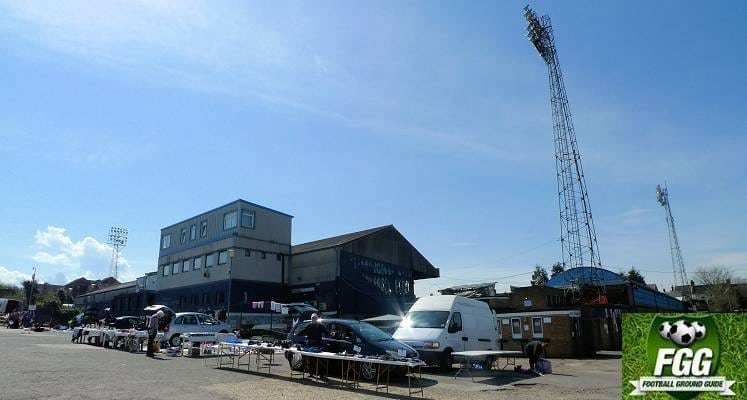 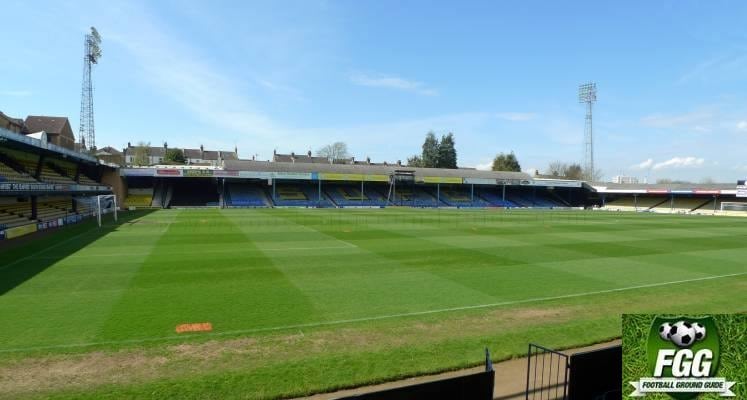 At one end of the ground is the relatively modern South Stand. This stand which was opened in 1994, replaced a former open terrace and greatly improved the overall look. It is a small ‘double-decker’ type of stand, the upper tier hanging over the lower. It is all seated and covered but unfortunately has a few supporting pillars. On its roof is a small clock, dedicated to a former player, Director & Chairman, Frank Walton. There are a couple of blocks of flats that overlook the ground from behind this stand. Opposite is the North Stand, which like the West Stand at one side of the pitch, is single tiered and has an old looking ‘barrel’ shaped roof (that dates back to the 1950’s), with the West Stand having a unique double-barrel roof. The West Stand extends around to the North Stand so that one corner is filled with seating. It has a number of supporting pillars right at the front, which may hinder your view of the action. It also has the most precarious looking TV gantry that stands on stilts and is accessed by a long ladder.

On the other side is the East (Main) Stand which is another single tiered, covered stand, that has a row of executive boxes running across the back of it. At the front are some strange looking dugouts, which has the management team standing at the front leaning on a wall, with the players sitting behind. The ground has four tall traditional looking floodlight pylons. In other words a proper football ground! On the roof of the North Stand is a relatively new scoreboard that was installed in 2012. The club have an unusual looking club mascot called ‘Elvis J Eel’, the ‘J’ standing for jellied!

The club have submitted plans to build a new 22,000 capacity stadium at Fossetts Farm, just behind the club’s training ground in Eastern Avenue.The scheme plans also to feature a hotel, retail space, a cinema, plus indoor soccer pitches and residential accommodation. It planning permission is quickly forthcoming then works could start towards the end of this year. However, initially the stadium will be restricted to a capacity of 14,000 and will only have three sides. It is hoped that revenue generated from the new build will then be used to fund future developments.

Away fans are normally housed on one side of the Colourfast North Stand (on the Main Stand side of the ground), where up to 1,200 away supporters can be accommodated. If demand requires it then the whole stand can be allocated bringing the allocation up to 2,000 seats. The stand is covered, but there are a number of supporting pillars running across the front of the stand that could impede your view. The stand is a former terrace and like most former terraces that have had seats bolted onto them, the leg room and height distance between each row is less than desirable. One good thing for away fans in the North Stand is that comparatively few numbers of fans can really make some noise from it, making for a good atmosphere. Refreshments within the away area are served from a ‘Transport Cafe’ type establishment, complete with tables and chairs. Bear in mind though, that getting your drinks in one piece back to your seat can be quite a challenge. The front of the stand is below pitch level, with stairs leading up to each pitch access point where the stewards stand. Going up and down these flights of stairs, with a cup of coffee in each hand, can present a problem.

Even though Roots Hall is an older ground it has some rather modern electronic turnstiles. Each match ticket has a bar code printed onto it and fans insert their ticket into a bar code reader at the turnstile to gain entrance to the stadium. I did notice once inside the stadium, that the stewards were alerted when a concession or junior ticket was being used so that they could check that it was for the appropriate person. If Southend score then Seven Nation Army by the White Stripes is blasted out around the stadium.

At the ground is the Shrimpers Bar. Although primarily for home fans, it does admit away supporters, apart from ‘high profile’ matches. It serves real ale and has a number of television screens showing the early kick off. Alas, there is little in the way of away fan friendly pubs close to the ground. Both the Spread Eagle pub and Blue Boar pubs are for home fans only, as well as the Railway close to Prittlewell Railway Station. That just leaves ‘The Bell’ which is a large Toby Carvery, which you pass on your way into Southend on the A127.

Otherwise the town centre is around a 20 minute walk away, where there are plenty of pubs including a Wetherspoons outlet (called the Last Post on Weston Road) which admits away fans. There are also a number of bars along the seafront, which can be quite nice on a sunny Saturday afternoon.

Please note that alcohol is not served to away fans within the stadium.

A trip to the seaside usually involves a fish & chip meal at some point. There is also a good fish and chip shop near to Roots Hall, which is located across the road from the Blue Boar by the traffic lights, called the ‘Fish House’, which I found to be excellent. Judging by the number of fans standing outside eating fish and chips (there is some seating inside as well), then I’m not the only one that thinks it is good.

From M25 take Junction 29 and follow the A127 to Southend. Continue towards the town centre, through the lights near to the Bell Pub. At the next roundabout turn right (3rd turning), continuing on the A127. The ground is on the right just past the next traffic lights. If you turn right as you reach the ground, this will put you behind the away end where there is plenty of street parking to be found. There is no car parking available for visiting fans at the ground itself. There is the Southend High School For Boys (SS0 0RG) which also offers car parking for £5 per car (the school entrance is on Prittlewell Road).

Bear in mind that in the fair weather months Aug/Sep/April/May, if the weather is at all sunny the whole of East London seems to head down the A127 on a Saturday afternoon, so allow an extra 30 minutes if the temperature is on the warm side.

Prittlewell Railway Station is the closest to Roots Hall, being located about a five minute walk away. It is served by trains from London Liverpool Street. As you exit the station turn right, you will then come to a crossroads with traffic lights. On your right is the ‘Fish House’, fish and chip shop. Pass this and turn right. Walk about 100 yards and the ground is tucked away on your left.

If you happen to end up at Southend Central station (served by trains from London Fenchurch Street), you’re about a 25 minute walk from the ground. The main bus station is close to Southend Central, and therefore it may be an idea to get a bus up to the ground, rather than walking.

If you require hotel accommodation in the area then first try a hotel booking service provided by Booking.com. They offer all types of accommodation to suit all tastes and pockets from; Budget Hotels, Traditional Bed & Breakfast establishments to Five Star Hotels and Serviced Apartments. Plus their booking system is straightforward and easy to use. Just input the dates below that you wish to stay and then select from the map the hotel of interest to get more information. The map is centered to the football ground. However, you can drag the map around or click on +/- to reveal more hotels in the town centre or further afield.

Official Programme £3
All At Sea Fanzine £1

Special thanks to Owen Pavey for providing the photos of Roots Hall.