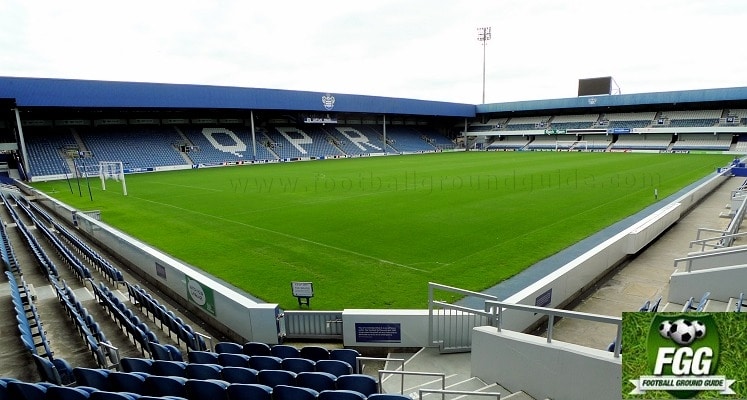 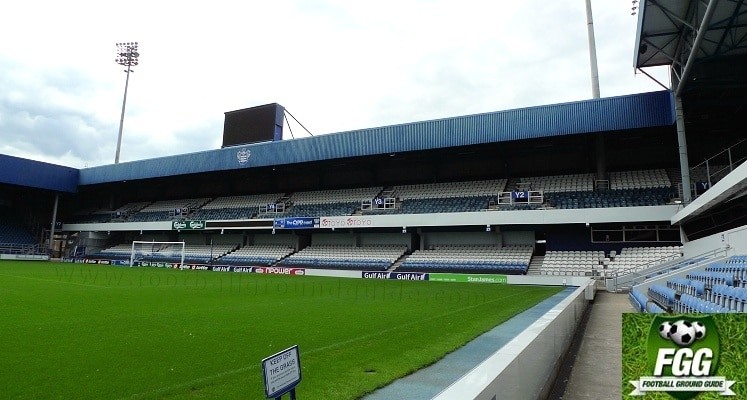 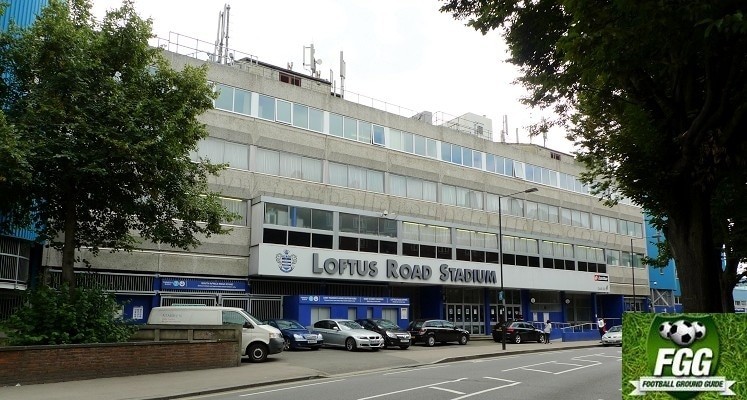 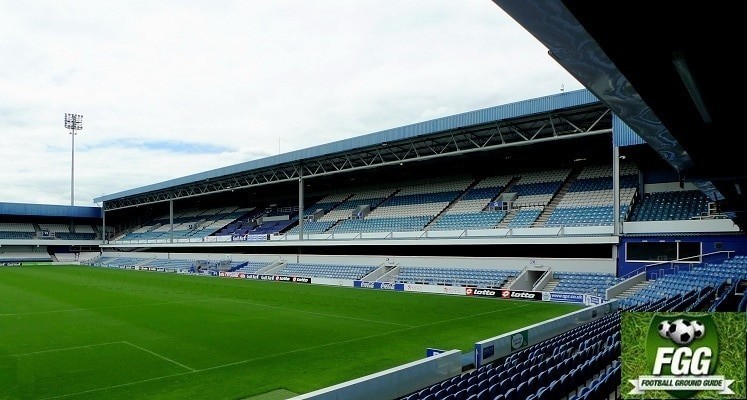 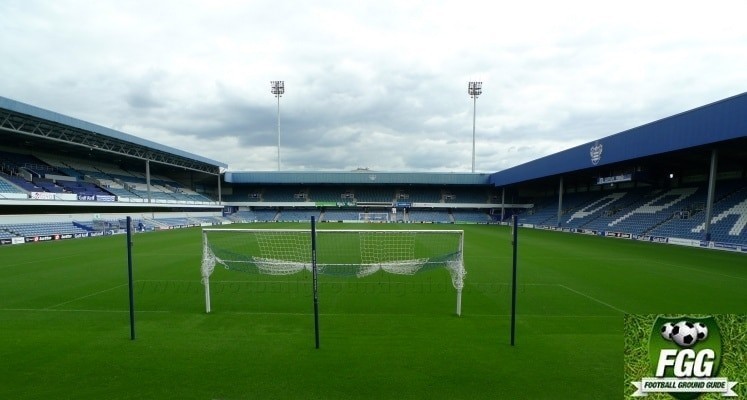 Loftus Road has a compact feel, as the ground is totally enclosed, with supporters being close to the pitch. An unusual aspect is that all four stands are roughly the same height, their roofs meet at all four corners with no gaps. The South Africa Road Stand on one side, has a larger upper tier, compared to the lower tier, with a row of executive boxes running across the middle. There are a couple of supporting pillars in this stand. The other side, the Ellerslie Road Stand, is single tiered, with a television gantry suspended below its roof. Both ends are similar looking two-tiered stands. On one of these, the School End (where the away fans are located) there is a large video screen located on the centre of its roof. Below this and situated between the lower and upper tier is a small electric scoreboard. The ground oozes character and there is nothing similar in the league.

In 2019 Loftus Road was renamed the Kiyan Prince Foundation Stadium in conjunction with a local charity, that educates young people about the dangers and repercussions of knife crime.

The Club have been looking for some time to possibly build a new stadium at a new location, rather than develop Loftus Road. This is simply that the present Loftus Road Stadium occupies quite a small footprint and is hemmed in by nearby residential housing, meaning that it would be almost impossible to build a larger stadium there. Having been thwarted so far in finding a nearby suitable site, speculation has now focussed on the Linford Christie Athletics Stadium, which is located in the Wormwood Scrubs area, within the same borough of Hammersmith & Fulham, around half a mile away from Loftus Road. The Council owned venue would be suitable, however the Club is looking for long term security and would probably prefer to purchase the site outright from the Council. Whereas the Council would may be prefer to retain some provision for athletics and lease the ground to QPR. So we shall see what happens with this.

Away fans are situated in the upper tier of the School End, where around 1,800 fans can be accommodated. If demand requires it then the lower tier can also be allocated, increasing the number of places available to about 2,500. If the away club only takes the upper tier allocation, then the lower tier is allocated to home supporters. Alan Griffiths a visiting Barnsley fan informs me; ‘the entrance for away fans to the School End upper tier is no longer in South Africa Road, but on the opposite side of the ground in Ellerslie Road (turnstile block 2).’

I must say that on my three visits, I have found there to be quite a large police and steward presence which I have at times found somewhat intimidating.  Please also allow extra time in getting to the stadium as queues form quickly to gain entrance to the away end and due to a number of security and ticket checks, it can be slow to move. Which as might be expected has lead to a number of frustrations when a pile of visiting supporters turn up ten minutes before kick off, expecting swift entry. The turnstiles open at 1.30pm on Saturday afternoons. Entrance to the stadium is gained by inserting your ticket into a bar code reader.

Inside the ground, the leg room is rather tight, the sight lines in parts of the upper tier not great and the atmosphere ‘hit and miss’. Inside the facilities look a little dated and the concourse can get very cramped especially if the away end is sold out. However, on the plus side, I have never experienced any problems at Loftus Road. Another plus point is that the food served within the ground is quite good and the service prompt. Food available includes; Hot Dogs (£3.70), Pukka Pies (Beef & Onion, Chicken Balti, all £3.50), Cheese & Onion Slice (£3.50) and Sausage Rolls (£3.10).

There is not much in the way of parking near to the ground. Matt Garside from Southampton suggests; ‘It’s probably easiest to just park on the road in this area as it costs £6.60 for three hours parking’. Some of these areas are free after 5pm. However, there are a number of restricted parking zones around the stadium so be careful where you park. You can also park at the Westfield Shopping Centre in Shepherds Bush. It is open seven days a week and costs £9.50 at weekends and £8.50 on weekday evenings. If you sign up in advance to their Smart Parking Scheme, then you get a 25% discount on the weekday parking charge (does not apply at weekends). There is also the option of renting a private driveway near the Loftus Road Stadium via YourParkingSpace.co.uk.

There are no pubs for away fans in the immediate vicinity around the stadium. In nearby Shepherds Bush Green there are a number of bars, however, most do not welcome visiting fans and employ doormen to enforce this, checking match tickets on entry. One exception is Belushi’s Bar, which is located in the Vue Complex, opposite Shepherd’s Bush Tube Station. This basic bar also shows Sky and BT Sports. Otherwise, alcohol is available inside the Loftus Road Stadium (albeit just bottles of Carlsberg at £5), although for some high profile games the Club opts not to sell any to visiting supporters.

By Train or London Underground Tube

The nearest London Underground station is White City on the Central Line, which is about a five minute walk away. Also nearby is Wood Lane Station, which is on the Hammersmith & City line. It is around a seven minute walk away from Loftus Road.

The nearest train station is Shepherds Bush, which is adjacent to the tube station. However, it is not directly served by any of the major London mainline stations. However trains from Watford Junction and Clapham Junction both stop there.

We’re not entirely sure if this is a record but given the amount of places QPR have called home over the years, it’s certainly up there. The very early years are barely captured by the history books with exactly when and where the home matches were played unclear. From 1886 – four years after formation – through to 1917, the club played at no fewer than 15 grounds starting with Welford Fields where they spent two years and ending at the Park Royal Ground; the latter was their home for a decade. Since then, QPR have switched between Loftus Road, which is probably their best known ground given they’ve been their three times and, most recently, since 1963, and the White City Stadium.

The Club operates a Category system (A&B) whereby the more popular games cost more to watch. Category A prices are shown below with Category B prices shown in brackets:

* These prices are for tickets bought prior to matchday. Tickets bought on the day of the game can cost up to £5 more per ticket.

QPR don’t have what you would define as an incredibly spicy rivalry, however, they do have several fairly banter fuelled derby games. Clashes with Brentford, Chelsea and Fulham are dubbed West London derbies owing to their location. It’s with the latter where things are perhaps most tense given the two clubs have been operating at a similar level the longest.

If you require hotel accommodation in London then first try a hotel booking service provided by Booking.com. They offer all types of accommodation to suit all tastes and pockets from; Budget Hotels, Traditional Bed & Breakfast establishments to Five Star Hotels and Serviced Apartments. Plus their booking system is straightforward and easy to use. Just input the dates below that you wish to stay and then select from the map the hotel of interest to get more information. The map is centered to the football ground. However, you can drag the map around or click on +/- to reveal more hotels in Central London or further afield. 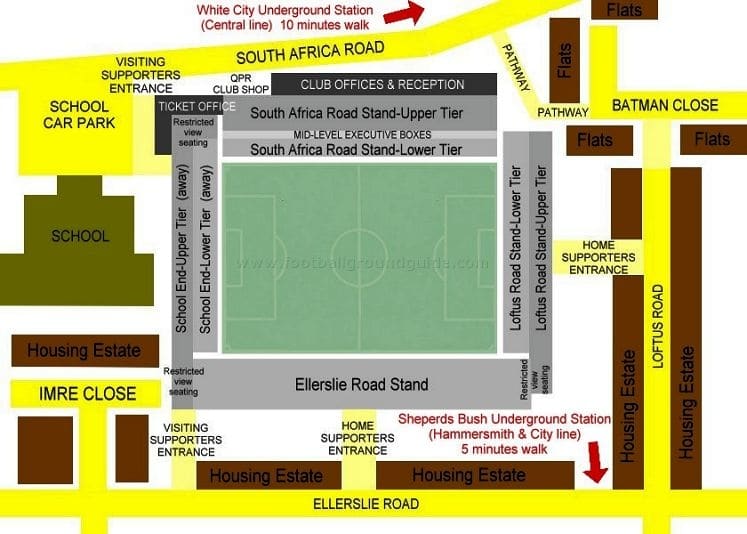