The Meadowbank Stadium is primarily an athletics one which is council owned and run. On one side is the large Main Stand. The stand is single tiered and of a good size, having a capacity of 4,000 seats. It has a large cantilevered roof, meaning that apart from the very back rows of seats, it is largely free of any supporting pillars that could impede your view. Having glass windshields to one side, it runs for the whole length of the playing area. On one side of this stand is a sizeable building which is part of the adjacent Meadowbank Sports Centre. The rest of the stadium is open to the elements, however only the Main Stand is open for football matches. An eight lane running track surrounds the playing area and at the West End of the stadium is a huge electronic scoreboard, that must have been ‘state of the art’ in its day, but it like the rest of the stadium, is now looking rather tired and dated. Both ends sweep around the running track in a semi circular shape and have a mixture of bench seating and standing areas, although some of these look to have fell into disrepair. The stadium has four gigantic floodlight pylons that can be seen from miles around.

By gaining promotion to the Scottish Football League in 2016, Edinburgh City created history by being the first non-league club to gain promotion via the new league pyramid system and play offs. Meadowbank Stadium was previously the home of Meadowbank Thistle FC who left and moved to become Livingston FC in 1995.

Special thanks to Joris van de Wier for provding the photos of the Meadowbank Stadium in Edinburgh.

The local council have put forward proposals to replace the current Meadowbank Stadium and Sports Centre, with a new facility. As part of these proposals a new athletics stadium would be created, featuring a running track surrounding an 3G artificial pitch, which can be used for football. The stadium would also include the construction of a new 500 capacity seated stand. However there are funding issues surrounding the project, so we’ll have to wait and see as to what happens next.

Visiting supporters are housed in the large covered Main Stand, on one side of the stadium. This stand is shared with home fans and normally segregation is not needed. Sightlines of the game are good with no obstructions and leg room is adequate. However the Main Stand is well set back from the playing action. Not only are there the eight lanes of the athletics track to contend with, between the Main Stand and the pitch but also a long jump run up and pit. So you may need to bring those binoculars! Also with relative small crowds in attendance and with the rest of the stadium being unused, then atmosphere is at a premium. The stadium itself looks rather run down and drab, which is not the fault of the Club (as they don’t own the stadium) and with the local Council looking to build a new stadium in its place, then it is unlikely that any further money will be injected to improve the current facilities in the near future.One unusual aspect of the stadium, is that after entering through the turnstiles you have to cross an indoor running track/warm up area, to gain access to the seating sections. There is a small refreshment kiosk located inside the Main Stand, whilst across the road from the stadium is a McDonalds.

Meadowbank Stadium is located near to Hibernian’s Easter Road Ground in the North East part of Edinburgh, which is on the other side of the city centre to the way that most people approach the city from the M8. Although mileage wise it may be a shorter route to go through Edinburgh City Centre to the stadium, it is normally quicker to go around the ring road. However the stadium is relatively easy to find as it is located on the A1.

From The West and M8, South and A1. At the end of the M8, follow signs for the City Bypass South A720, Berwick (A1). Keep on the A720 for nine miles and at the roundabout which is a junction with the A7/A6106, take the second exit onto the A6106 towards Millerhill/Newton. Follow the A6106 for three miles and on reaching a set of traffic lights, that is the junction with the A1 (there is a National Tyres garage on one corner) turn left onto the A1 (Milton Road), towards Edinburgh City Centre. Continue along the A1 as it becomes Willowbrae Road. On reaching a set of traffic lights, with a large church on the right hand side, turn left at the traffic lights onto London Road (signposted A1 City Centre). Meadowbank Stadium is further down London Road on the right. You will first see the tall floodlights and then turn right just before the stadium into the adjacent Sports Centre, where parking is available.

From The North After crossing the Forth Road Bridge, continue along the A90 towards Edinburgh. After eight miles you will reach a major set of traffic lights, where you turn right towards City ByPass/Edinburgh Airport/Berwick. On reaching a set of traffic lights with a Shell Garage on the left hand corner, turn right towards City Bypass (A720). On joining the City Bypass then follow directions From the West above.

Car Parking There is a 100 space car park at the Meadowbank Sports Centre, next to the Stadium, which is free to use.. Otherwise street parking.

Edinburgh Waverley Railway Station is the closest to Meadowbank Stadium and is just over a mile or a 20 minute walk away. Either grab a taxi from the station or Lothian Bus No 26 up to the stadium (see below).

By 26 Lothian Bus On exiting Waverley Station through the main entrance, turn right and walk up to the main Princes Street. On reaching Princes Street turn left and then take the second right onto St David Street. Just up on the left is bus stop marked ‘PL’ where the 26 can be caught. It takes about ten minutes to reach the stadium. On Saturday afternoons the Number 26 runs every ten minutes and costs £1.60 for an adult and 80p for a child.

Concessions apply to OAP’s, Under 18’s, Students and the Disabled, plus carer.

The Club have enjoyed a healthy non-league rivalry with nearby Spartans FC. With promotion to the Football League it will remain to be seen with which Clubs a rivalry develops.

Map Showing The Location Of The Meadowbank Stadium In Edinburgh 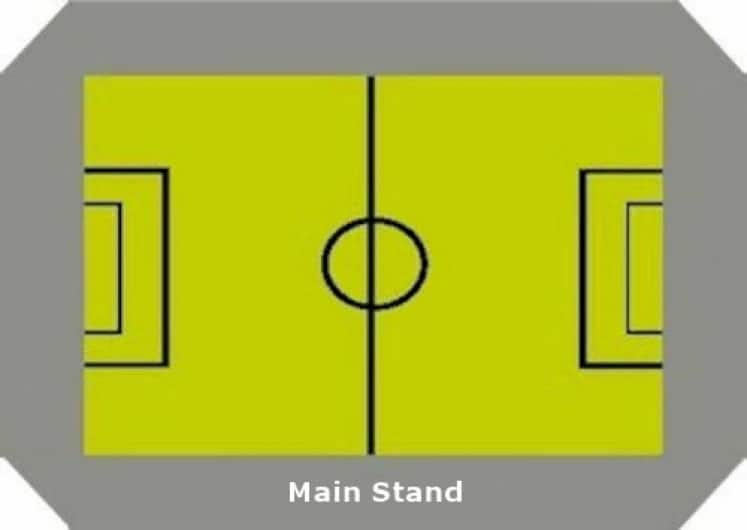