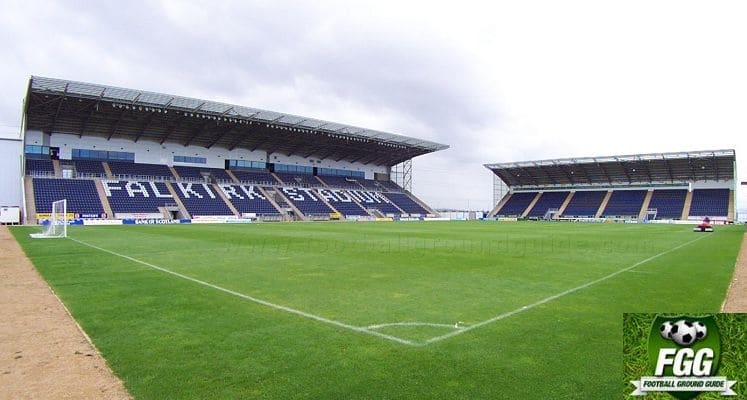 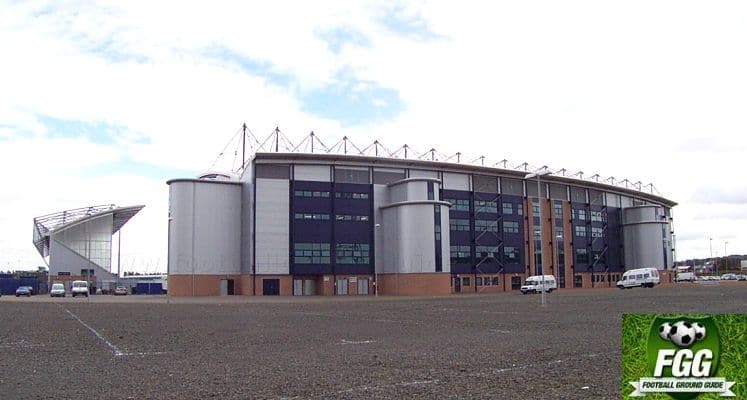 Opened in July 2004, the Falkirk Stadium as it was named, originally comprised just one stand, but since then two further stands have been built. The West Stand at one side of the pitch is a huge cantilever affair, that houses 4,200 supporters. It looks spectacular both close up and from a distance. In terms of design it is probably one of the best new stands constructed in Britain for some years. It is two tiered, with a large lower tier and a small upper tier with comparatively small windshields to either side. At one end is the North Stand, which was opened in March 2005. It is a covered all seated stand that has a capacity of 2,000. Opposite opened in 2009 is the near identical looking South Stand that also has a capacity of 2,000. The East Side of the stadium is open and unused for spectators, which rather detracts from the overall appearance of the ground. During 2013 the grass pitch was replaced by an artificial 3G surface.

Falkirk left their old Brockville Ground in 2003, which had been their home since 1876. Kevin Dunn adds; 'The Brockville Ground has been demolished and been replaced with a Morrisons superstore. Morrisons have not forgot the history of the location, and have some rather impressive stained windows with views of Falkirk FC's past'.

The Club have received planning permission to construct a new stand on the East side of the stadium. The planned capacity of this is 2,000. However the Club have yet to announce as to when construction is likely to commence.

Originally when the stadium was built it was envisaged that a much larger stand would be built on this side of the ground, raising the overall capacity to around 15,000. However the local authority re-zoned the whole area around the Grangemouth Petro-Chemical works and unfortunately this meant that the stadium fell within the disaster area of the works and so the capacity has been restricted to 10,000.

Away fans are housed in the North Stand at one end of the stadium, where up to 2,000 fans can be accommodated. David Burns a visiting Celtic fan adds; 'There were good views of the action and we were close to the pitch. The leg room was excellent, even for a tall guy like me. There was also plenty of height between rows. The concourse was quite small though and I was surprised to find that the toilets had no roof on them. Overall a good day out'.

Entrance to the stadium is gained via electronic turnstiles, which means that fans have to insert their ticket, which has a bar code printed onto it, into an electronic reader to gain entrance. I believe that this was the first of its kind to be installed at a Scottish football ground.

There is a bar at the ground called the 'Behind The Goal', which is open to both home and away supporters. Neil Stewart informs me; 'The nearest pub is the Mill Inn on Thornhill Road, which is around a five minute walk way, going towards the town centre. There is also the Tam Bain in Mary Street, Laurieston, which is around 10 minutes north of the stadium'. Kevin Dunn adds; 'There is a bar called Pennies at the old ice rink, just off the Grangemouth Road. Go up Grangemouth Rd towards the town centre and you will pass the college and the old ice rink (which is now an indoor football centre) on the left hand side. The pub is just down the right hand side of the old ice rink, near to the Saturday market'.

Otherwise it is probably best to drink somewhere on the way beforehand or else take the 20-25 minute walk into Falkirk town centre where there are plenty of bars to be found.  Lindsey Coombs adds; 'I would recommend the 'Behind the Wall' bar in the town centre, for a drink before the game. It has won supporters awards in the past and is located in the centre of Falkirk, close to Grahamston station. Also in the town centre on Bank Street is a Wetherspoons pub called the Carron Works.

From The East
Leave the M9 at Junction 5 and take the A9 towards Falkirk. After about a mile you will be able to see the stadium over on your right.

From The West
Leave the M9 at Junction 6 and take the A904 towards Falkirk. You will reach the stadium on your left.

Car Parking
Although the main car park at the stadium is for permit holders only, there is another provided for away fans as Stuart Laing informs me; 'The away fans car park costs £4 to park in, its entrance is on the Grangemouth Road'. Alternatively there is car parking available at Falkirk College which is a short distance along the A904 towards Falkirk. Otherwise street parking.

Falkirk Grahamston Railway Station is about a mile away from the Falkirk Stadium. It is a fairly straight 20 minute walk down the A904 Grangemouth Road. As you come out of the station turn left and follow the ring road round (A803) to the right. Turn left into Weir Street and at the bottom of the street turn left onto Kerse Lane. This is the A904 which leads into Ladysmill and then becomes Grangemouth Road. Go straight down this road and you will eventually reach the stadium over on your right.

Otherwise any buses that are Grangemouth bound going from Falkirk should also pass the stadium.

* When accompanied by a full paying Adult.

Falkirk Hotels - Find and Book Yours And Help Support This Website

If you require hotel accommodation in Falkirk or Edinburgh then first try a hotel booking service provided by Booking.com. They offer all types of accommodation to suit all tastes and pockets from; Budget Hotels, Traditional Bed & Breakfast establishments to Five Star Hotels and Serviced Apartments. Plus their booking system is straightforward and easy to use. Yes this site will earn a small commission if you book through them, but it will help towards the running costs of keeping this Guide going.

Map Showing The Location Of The Falkirk Stadium

Thanks to Dave Tennant a visiting St Mirren fan for providing the photo of the South Stand at Falkirk Stadium. 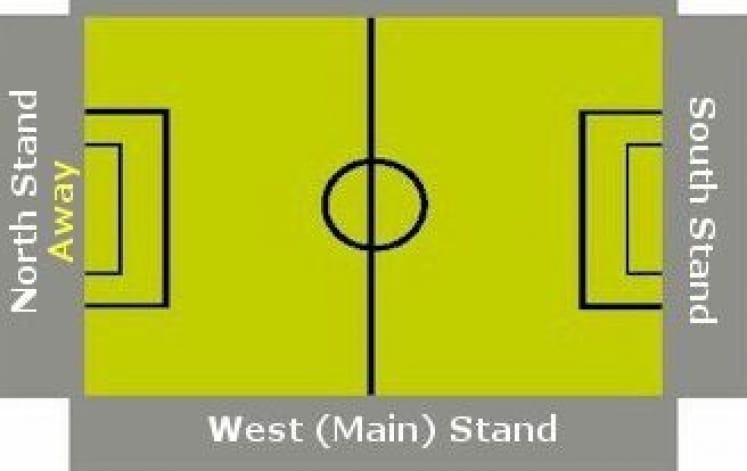