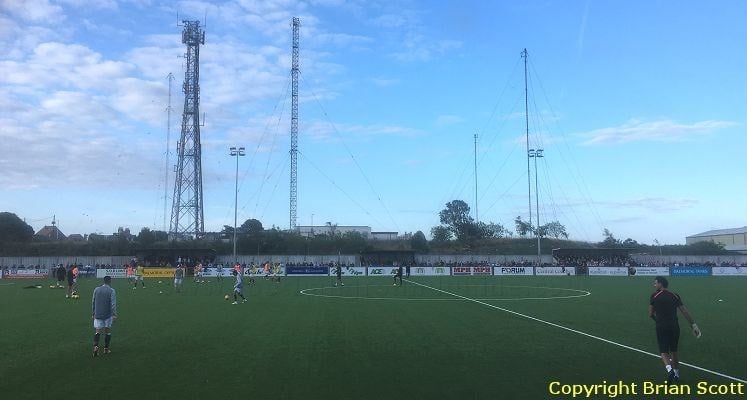 Cove Rangers had been without their own ground for a number of seasons after leaving Allan Park in 2015, which had been their home since 1948. Balmoral Stadium was completed in time for the start of the 2018/19 season. This new stadium is quite small but functional, for a team newly promoted to the Scottish Football League. On the South side of the stadium is the small Main Stand which straddles the halfway line. It runs for about a quarter of the length of the pitch and has 324 seats spread across four blocks. This stand is covered and the roof sits quite high above the seating as at the back of the stand is a glassed frontage for other club facilities, including a hospitality suite. This stand also houses the dressing rooms and club offices. There are flat standing areas to each side, and the team dugouts are this side of the pitch.

On the opposite side, there are three small prefabricated stands, that are spaced apart. The centre one straddles the half way line and has four rows of seats, totalling 86 seats. The two other stands are identical with seven steps of terrace, one overlooking each half of the pitch. The remainder of this side is flat standing. Both ends are open flat standing areas. The skyline behind the North side is dominated by a particularly ugly communication pylon and some less obtrusive pylons and wires. There are four floodlight pylons running down each side of the pitch.

Games are rarely segregated at the Balmoral Stadium. When segregation is in force then the East End and half of the North Side, plus some of the seats in the Main Stand can be allocated. The North Side includes a small covered terrace, whilst apart from the Main Stand the rest of the visitors’ areas are uncovered. Normally a warm and friendly welcome is given to visiting fans.

There is a small ‘fan zone’ clubhouse bar at the stadium which welcomes visiting fans. As the ground is located on an industrial estate, which is about out of town too, then there is not much else nearby in terms of drinking places. One exception is the Wellington Hotel on Wellington Road (the A956) which has a sizeable bar. It is located around half a mile, or a ten minute walk away from the stadium. There is also the Landykes on Loriston Road, in Cove, located just under a mile to the east of the ground.

The Balmoral Stadium is located to the South of Aberdeen.

From The South
Leave the A92 and take the A956 towards Altens. On reaching a roundabout with a Burger King and a Shell Garage on the left-hand side. Take the first exit towards the retail park and then follow the road as it first bears around to the right into the industrial estate, passing the Royal Mail office on the left. The ground is at the end of this road.

From The North
Follow the A92 around Aberdeen heading towards Dundee. After crossing the Bridge over the River Dee, then at the next roundabout, take the first exit onto the B9077, signposted Altens Industrial Estate. Go straight over the next two roundabouts and at the third, take the third exit onto the A956, towards Perth. You will then pass the Wellington Pub & Grill on your right and a Shell Garage on your left. At the next roundabout where there are a Burger King and a Shell Garage on the right-hand side. Take the fourth exit towards the small retail park and then follow the road as it first bears around to the right, into the industrial estate passing the Royal Mail office on the left. The ground is at the end of this road.

Car Parking
There is a small car park at the ground. Otherwise, there is street parking available on roads around the Balmoral Industrial Estate that the ground is located in.

Aberdeen Railway Station is around three miles away from the Balmoral Stadium and is uphill most of the way, so it is rather far to walk. However, there is a very good bus service that will take you along the A956 near to the stadium. From Aberdeen Railway Station cross the road to the other side of Guild Street. The First Aberdeen Number 3 bus goes from here towards Cove. After passing a Shell Garage on the left, then at the next roundabout (where there is another Shell Garage on the right and a Burger King) get off and follow the road in-between Shell and Burger King into the small Retail Park and then the Industrial Estate. The stadium is at the end of this road. The bus takes about 15 minutes and runs every 15 minutes during the day, reducing to half hourly in the evenings. There is one back after an evening game. You can view timetables on the First Group website.

* The terrace price is paid on the gate with a further £2 payable inside to transfer to the Main Stand.

There are spaces for wheelchair users and helpers. These must be booked with the Club by calling: 01224 392111.

Map Showing The Location Of The Balmoral Stadium

Aberdeen Hotels - Find and Book Yours And Help Support This Website

If you require hotel accommodation in Aberdeen then first try a hotel booking service provided by Booking.com. They offer all types of accommodation to suit all tastes and pockets from; Budget Hotels, Traditional Bed & Breakfast establishments to Five Star Hotels and Serviced Apartments. Plus their booking system is straightforward and easy to use. Yes this site will earn a small commission if you book through them, but it will help towards the running costs of keeping this Guide going.

Special thanks to Brian Scott for providing the photos of the Balmoral Stadium and a lot of the information for this page. 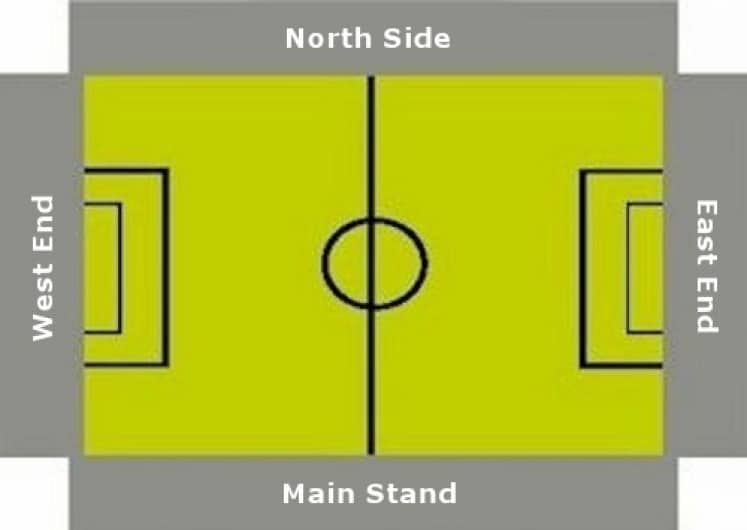