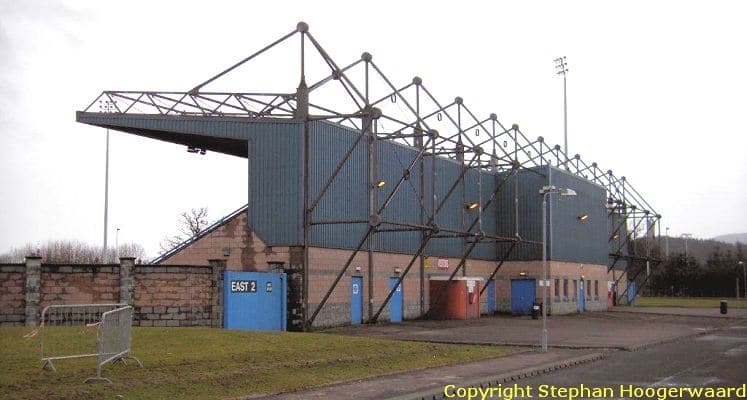 The Forthbank Stadium was opened in 1993, after the Club moved from their original Annfield home. The modern stadium comprises two seated stands, on either side of the pitch and a small terrace at either end. The largest of these stands is the West Stand, which is a covered, single tier, all seated stand, that has some executive boxes running across the back of it. Opposite is the similar looking East Stand, which is smaller that the West Stand, not so much in height but in its overall length. This is also covered, all seated and has Police Control Box situated at its rear. Away fans are allocated this stand. The terraces at each end of the stadium are almost identical. They are small and uncovered box like affairs, which are situated well back from the pitch. These terraces are only opened for the bigger games. Looking out beyond the North Terrace there are some wonderful views of the surrounding countryside. Outside of the stadium there are a number of artificial pitches behind the West Stand.

Away fans are located in the East Stand at one side of the pitch, where up to 1,000 fans can be seated. This covered stand, has good facilities and provides a good view of the playing action. If demand requires it then a further 500 terrace spaces can be provided in the South Terrace.

At the Forthbank Stadium itself there is 'Binos Bar' which operates in one of the hospitality suites in the Main Stand. Normally away fans are welcomed, however for high profile games then it may not do so. Otherwise as the stadium is on the very outskirts of town, there is not much around. However there is one pub called the Kerse Inn on the nearby Retail Park, which you will pass on your right as you drive down to the stadium.

Leave the M80 at Junction 9 and take the A91 towards Alloa. At the 4th roundabout turn left and the ground is just down this road on the right. There is a large car park at the ground which is free.

Stirling Railway Station is just over a mile away from the Forthbank Stadium, so either a 20 minute or so walk or jump in a taxi. Otherwise there is the P1 Park and Ride Bus which runs from the City Centre, passing by the Forthbank Stadium (alight at the Peak Leisure Centre stop) on its way to Springkerse. As you come out of the station turn right and the bus stop is further up Goosecoft Road on the right. The service operates every 15 minutes on Saturday afternoons and costs £1.20 for an adult return. For more information about the Park and Ride Service see the Stirling Council website.

Come out of the front exit at Stirling railway station and turn left. You will see a modern looking foot bridge not too far in front of you as you walk down the road. Use this bridge to cross over the railway tracks. When you come down the stairs at the other side walk straight ahead then go diagonally across the grassed area to Forthside Way. This road will bend round to the left and take you over a mini roundabout straight towards the stadium which will become visible on your left hand side. Thanks to Iain Badger for providing these walking directions from the railway station to the stadium.

There are 18 spaces available for home fans in the West Stand, as well as 18 for away fans in the East Stand. Disabled fans and their helper are admitted free.

Stirling Hotels - Find and Book Yours And Help Support This Website

If you require hotel accommodation in Stirling then first try a hotel booking service provided by Booking.com. They offer all types of accommodation to suit all tastes and pockets from; Budget Hotels, Traditional Bed & Breakfast establishments to Five Star Hotels and Serviced Apartments. Plus their booking system is straightforward and easy to use. Yes this site will earn a small commission if you book through them, but it will help towards the running costs of keeping this Guide going.

Map Showing The Location Of The Forthbank Stadium In Stirling

Special thanks to Stepham Hoogerwaard for providing the photos of the Forthbank Stadium, Stirling Albion.