Football Grass Types: What is used on professional pitches?

Football pitches at the elite level are as close to carpet as you can get. It's a far cry from your back garden and Sunday league pitches. Here we explore the most common football grass types and how they get them looking so damn good.

What is it that makes football pitches so special?

Before we get into the most common grass types, we want to take a quick look at what makes the football pitch so special. At this point, we specifically mean from a spectators perspective and not a scientific one; we'll come to that later. What then do we see on a football pitch? Well, if you've ever been sat in the stands of a football stadium looking out over the field of play there is a good chance you've marvelled at the patterns on the grass. Over the years we've seen horizontal lines, vertical lines, zig-zags and even circles. It's really quite the impressive feat of ground keeping.

On top of the patterns, most pitches see 22 players play on them for 90 minutes each week. That means there is jogging, sprinting, jumping and twisting taking place on the surface. To give you some perspective, the average Premier League player covers over 10km per game. Despite all of this, you rarely see a pitch cut up – no matter how wet the surface is. Neither do you see top-level games getting postponed through waterlogging whilst the days of freak bobbles causing back passes to beat keepers ala Bryan Gunn are almost completely eliminated from the game.

Why is this? Some of the improvements are based on the fact we understand more about protecting the surface e.g. pitch membranes and an element comes from improved technology and tools – think of ground lamps and advanced weed control. None of these will surprise the majority of readers; it's far from groundbreaking stuff. What is less widely known though is the incredible advancements in the technology of grass? That's right, we have tech-heavy grass! 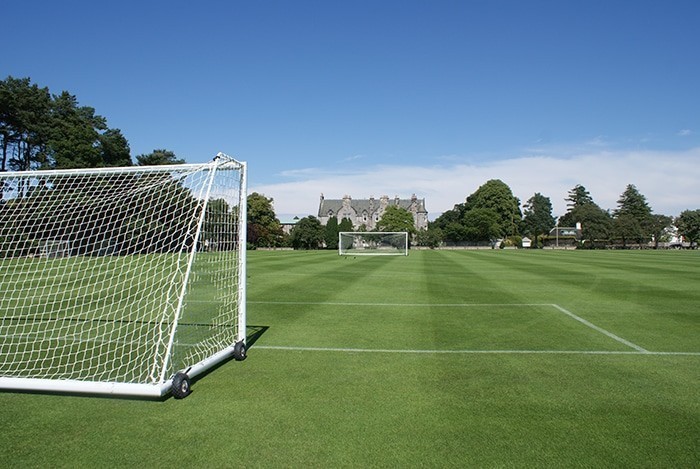 What do the laws of the game say about playing surfaces?

The laws of the game, which are administered by IFAB are only worded at a reasonably high level. Football grass types can be one of three things; an entirely natural surface, an entirely artificial surface providing it is green in colour whilst there are certain approval processes in place for hybrid surfaces. By definition, these hybrid pitches will be constructed as part natural and part artificial.

What is the most popular of the football grass types used on football pitches?

In generic terms, clubs that play at the very pinnacle of the professional football ladder typically have a hybrid surface in place at their stadium; it's commonly used at training grounds too. In a nutshell, the reason a lot of clubs opt for this is to achieve a better playing surface whilst reducing the pain of maintenance. It's not just a straightforward decision though because, as with most things in life, there is more than one choice of hybrid grass you can choose from.

Somewhat surprisingly one of the most popular football grass types – GrassMaster turf – has been around for nearly 30 years; it was first born in 1993. Of course, it's been fine-tuned over the years and is used much more widely nowadays. The technology that underpins the surface is a process of injections into the grass; this pumps millions of fibres of the chemical polypropylene, which is one of the closest relations to commonplace plastics. The GrassMaster ‘mix' is designed to connect and grow in tandem with the actual surface with its deep roots helping to increase the draining efficiency and provide a solid base to play from.

In terms of who uses the surface, you can pretty much look anywhere. From an England perspective, the big names are Wembley Stadium, Old Trafford and the Emirates; there are plenty of others who have decided to follow a similar path. It's not just the UK where GrassMaster is popular though. The technology is used widely across Europe with Barcelona and both Milan clubs playing on it each week whilst grounds in Saudi Arabia, Australia and the United States – amongst others countries – also use it.

Another major player in the hybrid surface market is SISGrass. They were formed in 2002 but have already installed their 95% natural, 5% synthetic style grass at multiple elite venues with Manchester City the biggest club mentioned on their list of clients whose expectations have been ‘exceeded'. They really took off in 2018 after winning the contract for the World Cup. The science behind how their surfaces work are not dissimilar to the GrassMaster in that they ‘stitch' a form of plastic into the deeper part of the grassroots. It's claimed one of their traditional hybrid pitches reduced wear and tear on a pitch by over 200%.

SISGrass are an award-winning company with respect of pitch innovations with two particular aspects catching the eye; they also offer a reduced hybrid grass, which allows teams to transform their existing pitches whilst they use an all-electric piece of kit to complete their installations.

What about fully artificial pitches? You will likely have seen mentions of 3G pitches in the news. You often see a story land in the press about 3G surfaces on the international scene or in one of the European club competitions. These surfaces are called 3G because they're ‘third-generation synthetic' with three elements creating the pitch; they are made up of fake turf along with a dual combination of rubber and sand infill.

These surfaces are widely used at the grassroots and at the school level owing to their low cost, low maintenance and hard-wearing qualities. It's much more of a debate in elite sport though with many holding a strong dislike of the surfaces; it's been claimed they lessen the quality of games and increase the risk of injury. At the end of the day though 3G pitches are better than playing on waterlogged pitches, in mud or on ice. After all, not every place on Earth is designed to grow luscious grass.

There you have it, the most common grasses in football. Of course, you still see a fair share of good old fashioned grass as well!