The club have negotiated an extended longer lease with Nottingham City Council, who own the City Ground. This has given the Club the security to further invest in the ground and surrounding area, details of which have been announced today.

This will involve the construction of a new stand to replace the old Main Stand, which is now called the Peter Taylor Stand. This stand which was originally built in the 1960's, looks somewhat out of place in the company of its more modern neighbouring stands, Interestingly during a match against Leeds United in 1968, a fire broke out in the stand and it was gutted. Luckily no one was hurt and enough of the stand survived for it to be refurbished.

The City Ground With New Stand 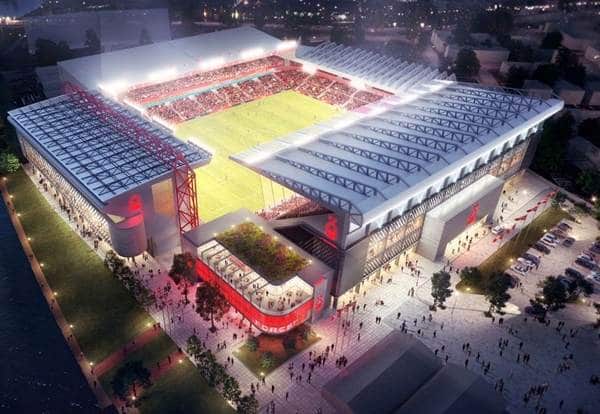 The new Peter Taylor Stand which will replace it will be a good size, housing around 10,000 fans. This all seated stand will also have a number of executive boxes and other corporate facilities, plus new changing rooms and press facilities. A nice feature is that the stand will also include a Club Museum as well as a new Club Shop. If the Club can secure planning permission for the new stand, then it is hoped that building works will begin at the end of next season (2019/20). Although the Club have announced when the stand would be completed I would estimate that it would probably take at least year, maybe up to 18 months. Once opened the capacity of the City Ground will rise to around 38,000.

How The Stadium Will Look Externally With The New Stand How That View From Across The River Trent Looks Today The artists impressions of how the new stand will look are courtesy of the Nottingham Forest FC website, where more information and a promotional video can be found.