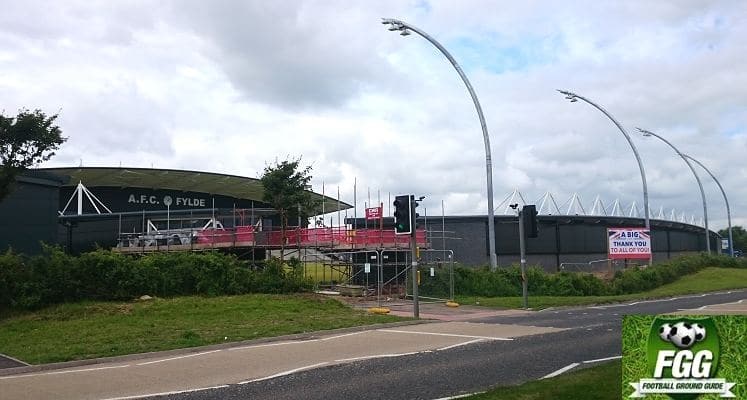 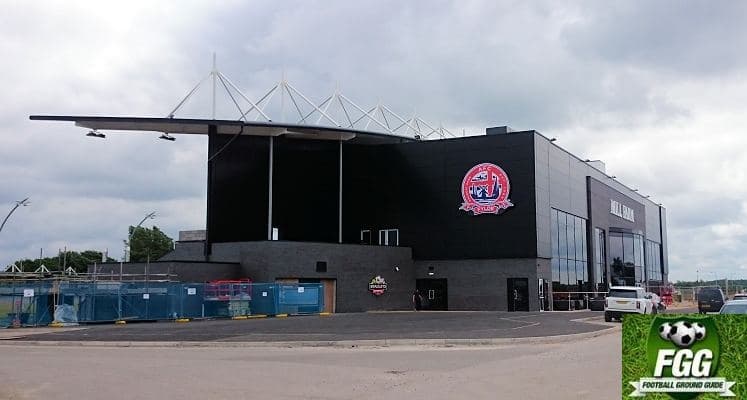 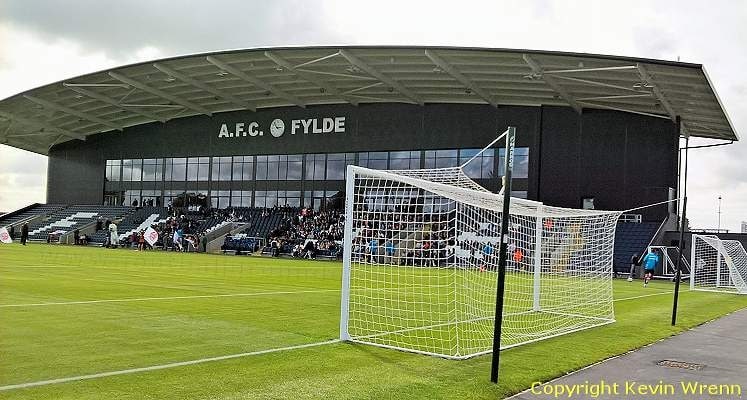 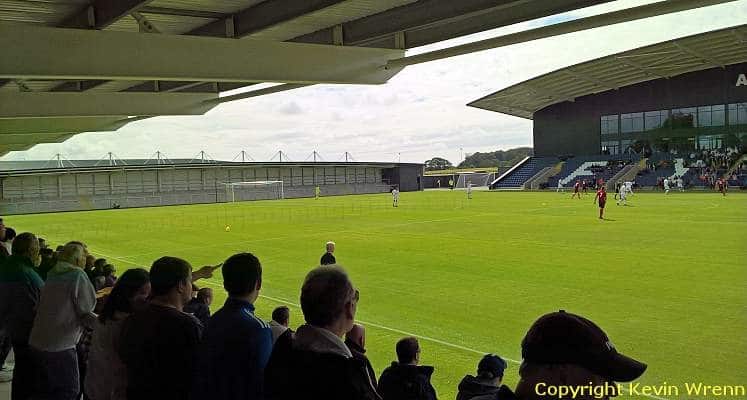 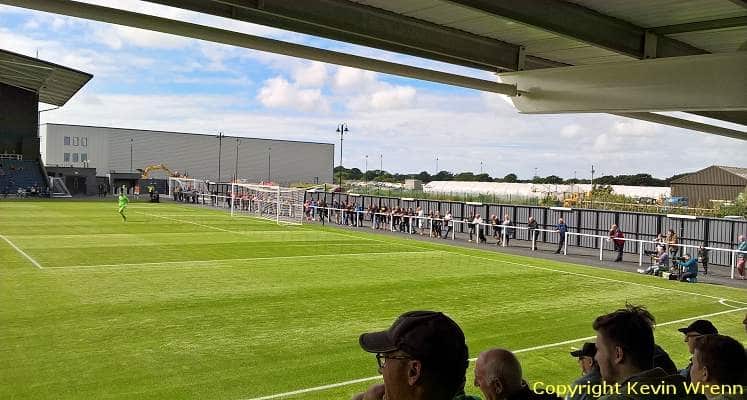 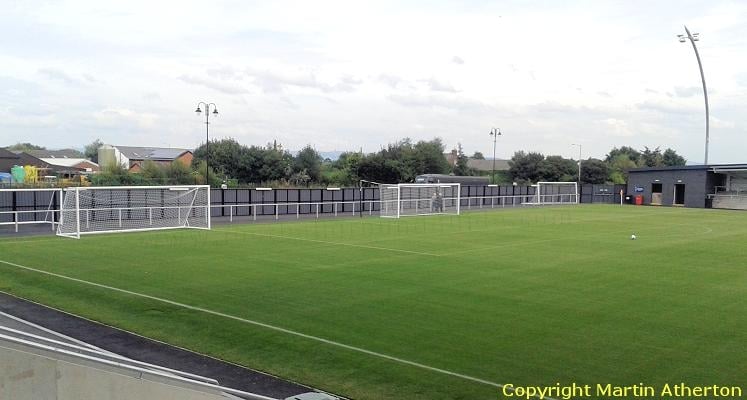 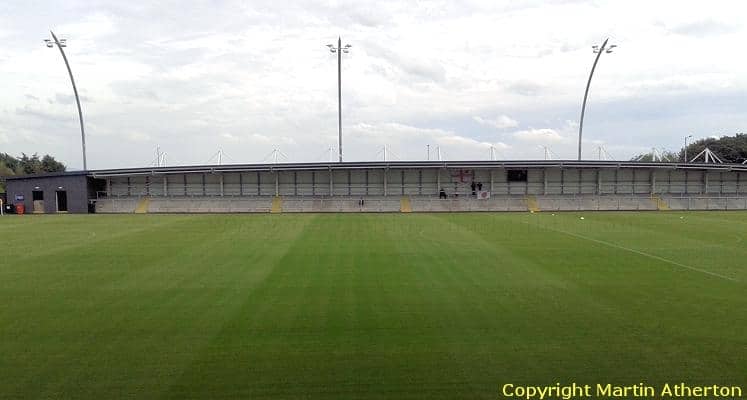 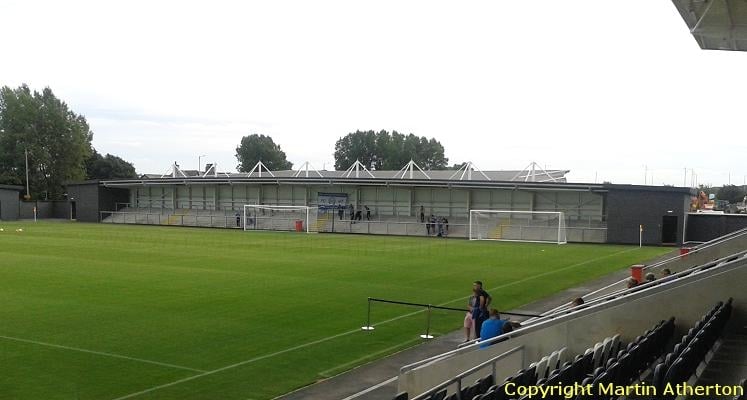 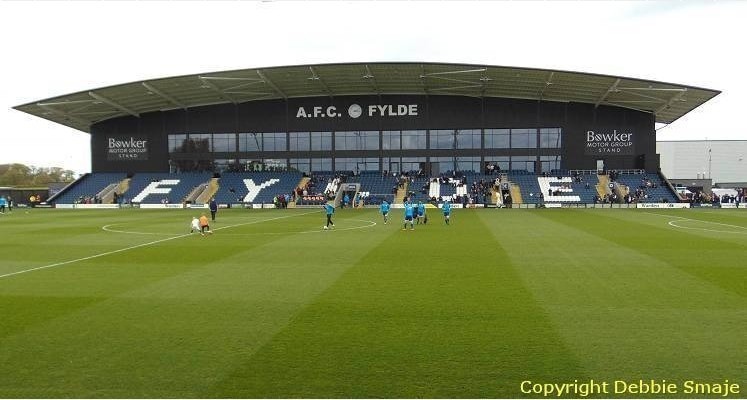 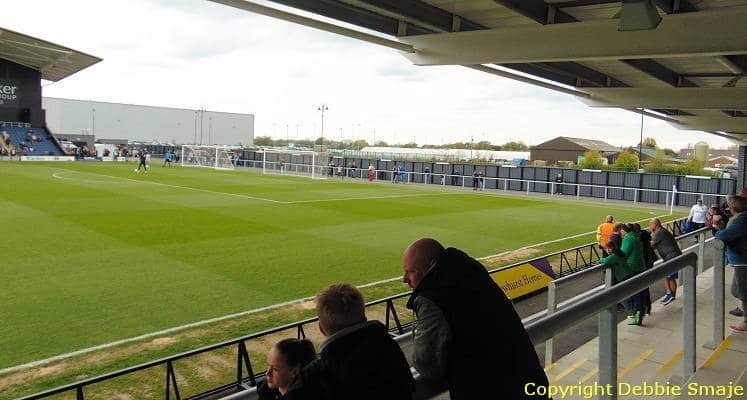 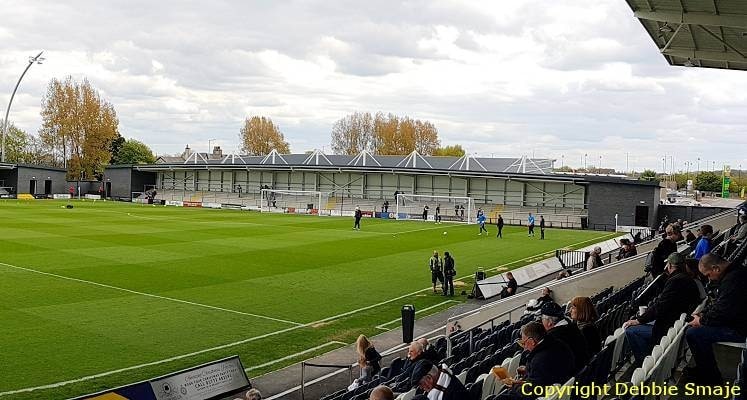 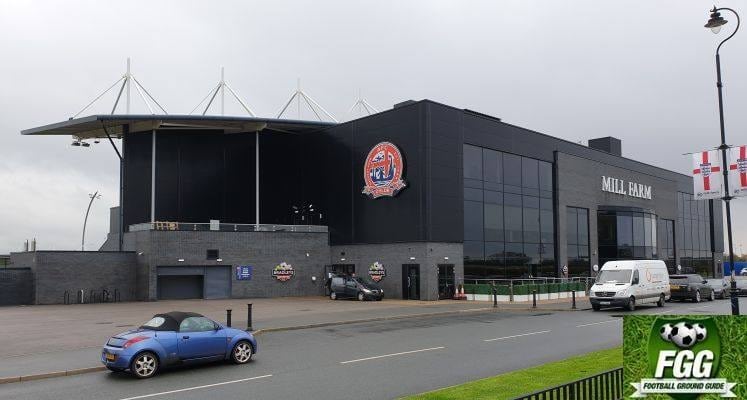 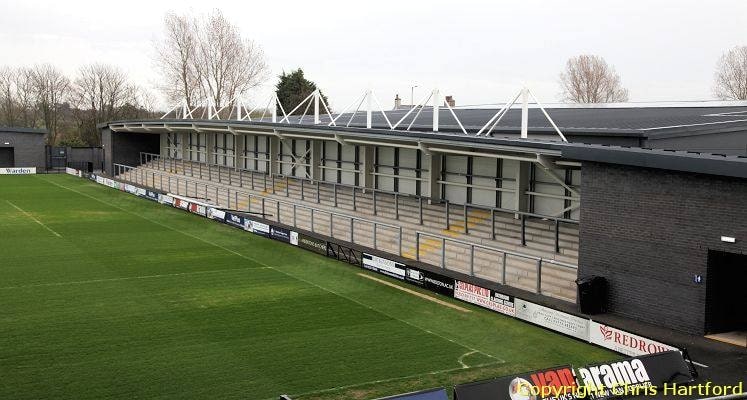 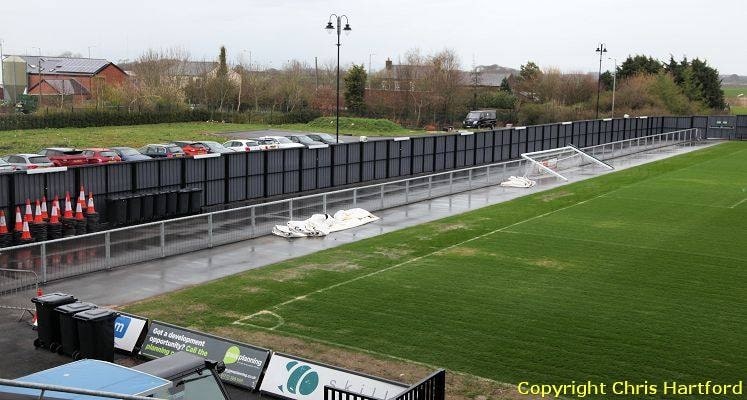 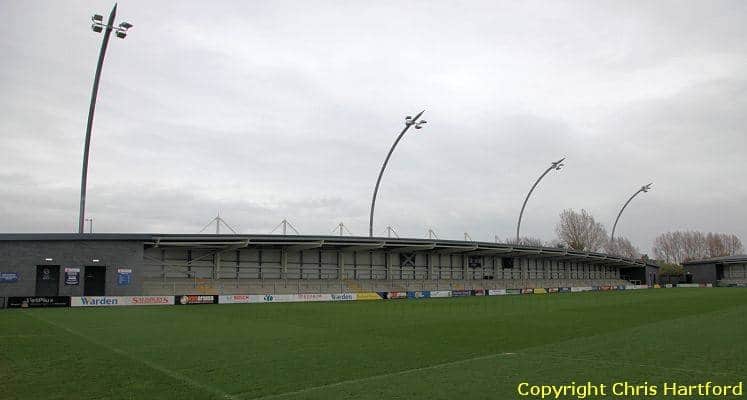 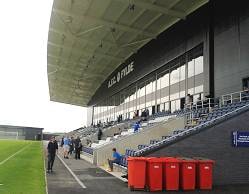 After spending ten years at Kellamergh Park, the Club moved four miles to the newly built Mill Farm Stadium, which is situated close to the M55. The move surprised a number of people, as the Club had invested a lot of money in Kellamergh Park, transforming what was at one time an open field at the back of a country pub into a ground with modern facilities and one which could accommodate up to 3,000 supporters. However the Club’s owners have aspirations of taking the Club into the Football League and felt that a new stadium was needed to match those ambitions. Certainly, the new stadium is of Football League standard and it would seem only a matter of time, but for the playing team come up to the same standard.

The thing that strikes you about the new Mill Farm Stadium, is that the build standard is of high quality; it certainly has not been built ‘on the cheap.’ Although currently with structures only on three sides, with the North End just having a small open flat standing area, there is plenty of space at that end for future expansion. The stadium is dominated on one side by the large Main Stand, which towers over the rest of the stadium. With a capacity of 2,000 seats, housed within a single tier, the stand is covered by a large roof, which is semi-circular in appearance. The roof is placed quite high above the seating area, as above the seating section, there are two floors fronted by large glass windows. These areas are surrounded by black cladding, whilst further above there is a large clock, flanked in large white lettering; spelling out AFC Fylde. Overall the stand looks quite striking. Opposite is a small covered terrace, which runs the full length of the pitch. In keeping with the design of the Main Stand, it also has a curved roof. What is most striking feature of this side are the four large curved floodlight pylons that extend from behind the stand over the roof. These are quite unusual and I don’t know whether it was part of their design brief, but to me, they seemed to resemble a wave in outline. The remaining end is a fair sized covered terrace that like the rest of the ground is free any supporting pillars meaning that you can get a good view of the playing action.

If segregation is in force then away fans are mostly housed in the South Terrace at one end of the ground. This covered terrace can house up to 1,000 fans. In addition, visiting supporters are also allocated seating in Block A of the Main Stand. The Mill Farm Stadium also has electronic turnstiles, which means that you need to insert your ticket into a barcode reader to gain entrance. Although now common place in the Premier and Championship Leagues, I believe AFC Fylde is the only Club at this level to have them and this may confuse some visiting fans who have never seen these type of turnstiles before.

As you would expect from a modern stadium built to a Football League standard, then the facilities within the stadium and view of the playing action are both good and normally there is a good atmosphere generated.

Please note that away fans can purchase tickets directly from AFC Fylde for the visitors sections online. See the AFC Fylde website for more information.

<p><img alt=”Bradleys Sports Bar Sign” src=”/wp-content/uploads/2020/09/bradleys-sports-bar-afc-fylde.jpg” style=”width:250px; height:209px; border-width:0px; border-style:solid; margin-left:5px; margin-right:5px; float:right” />At the Mill Farm Stadium itself, is Bradleys Sports Bar, which normally admits away fans. This bar is quite plush inside, with one end wall covered in a number of television screens which are arranged together to make up one huge screen. With more screens throughout and sports memorabilia adorning the walls, it reminded me of Sports Bars that I have visited in the past in the United States, it is that good! But going one better than our American Cousins, Bradleys offers real ale. There are four handpumps including two beers from the Bowlands Brewery.</p>

<p>The nearest pub to the ground is the Lane Ends pub on Weeton Road, which around a ten minute walk away. This pub offers food and also has live televised sports. In the centre of nearby Wesham, not far from the railway station are two pubs which are situated close together on Garstang Road&#39; the Royal Oak and the Stanley Arms. If you are feeling hungry the also in the centre of Wesham on Weeton Road is the handy Wesham Chippy. Right by Junction 3 of the M55 and on the A585, is the Fairfield Arms which also offers food.</p>

Leave the M55 at Junction 3 and take the A585 towards Kirkham. After one mile you will reach the Mill Farm Stadium on your right. The entrance to the complex is just off the roundabout by the Aldi store. There is a fair sized car park at the stadium itself, which costs £5. Please don’t be tempted to park in the nearby Aldi Store as parking restrictions apply and you may end up with a parking fine for your trouble.

Post Code for SatNav: PR4 3BY (this will take you to the nearby Fleetwood Road. Some SatNavs are not recognising the published Club post code of PR4 3JZ, I guess this is because they have not yet been updated with the new stadium location).

Kirkham & Wesham Railway Station, is situated around three quarters of a mile away from Mill Farm Stadium, or around a 15 minute walk. It is mainly served by trains from Manchester Victoria and Blackpool North. Although there are other less frequent services from London Euston, Huddersfield and Buxton.

With the main entrance to the station behind you, turn right and proceed along Station Road. Go straight across a mini roundabout and at the next mini roundabout turn right at the Wesham Chippy into Garstang Road North. Continue straight along this road for around half a mile, passing two churches on your right and Wesham Fire Station on your left. At the end of the road you will reach a roundabout. Mill Farm Stadium is located on the other side of the road and roundabout behind the Aldi Store.

* Club Members can gain a discount on these adult ticket prices.

Blackpool Hotels - Find and Book Yours And Help Support This Website

If you require hotel accommodation in Blackpool then first try a hotel booking service provided by Booking.com. They offer all types of accommodation to suit all tastes and pockets from; Budget Hotels, Traditional Bed & Breakfast establishments to Five Star Hotels and Serviced Apartments. Plus their booking system is straightforward and easy to use. Yes this site will earn a small commission if you book through them, but it will help towards the running costs of keeping this Guide going.

Map Showing The Location Of The Mill Farm Stadium

Special thanks to Debbie Smaje and Chris Hartford for providing some photos of the Mill Farm Stadium AFC Fylde for this page. 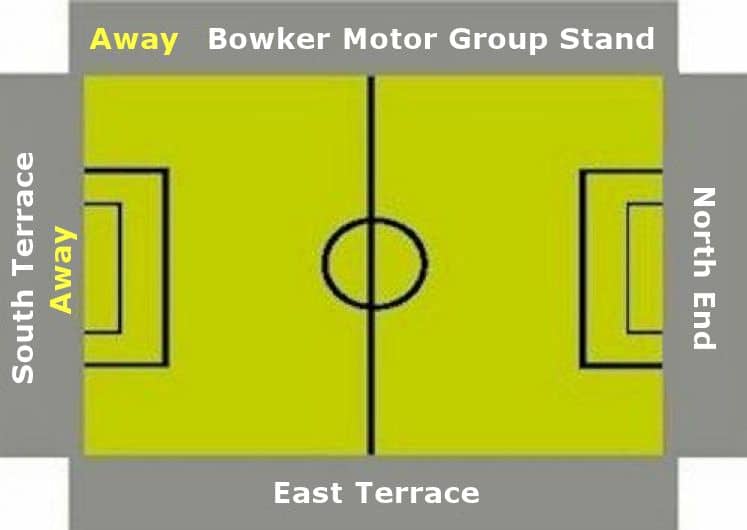