The Racecourse is a classic looking football ground with four prominent floodlight pylons and a large home terrace, which unfortunately is now closed. The stadium also has a great blend of the old and the new, with the Mold Road Stand, having a modern interesting design. To show how times have changed and the amount of all seated stadiums that there are now, the Kop Terrace at Wrexham was until recently the largest terrace in the League. In its heyday almost 9,500 fans could be stood on it. This stand is a throwback to when every ground had a similar kind of terrace and even the crowd barriers are painted in the club colours of red & white (rather than those dull metallic coloured barriers present in modern stands). The terrace which is located at one end of the ground is partly covered (to the rear) and although no longer in use is still a great sight.

At the other end is the University End. This stand which was opened in 1978 is a two-tiered stand, covered and all seated. It has a couple of supporting pillars, situated between the two tiers. It also has an electric scoreboard on its roof. On one side is the Yale Stand. This stand was opened in 1972 and got its name from the Yale College, which was situated behind this stand. It is now known as the bkoncepts Stand in a corporate sponsorship deal. It is a fair sized two-tiered covered stand, which is now all seated, having previously had terracing at the front. The team dugouts are located in front of this stand. Opposite is the Mold Road Stand that was opened in 1999. This side of the ground has been unused for a number of years so its construction greatly improved the overall ground appearance. It is semi-circular in design with a capacity of 3,500 seats and features an unusual roof design. It is now called the Hays Travel Stand.

The Club hopes that after a number of years of being unused that the Kop End will see a new 5,000 capacity stand being built. This would form part of a wider regeneration scheme to improve the Mold Road area of Wrexham.

Away fans are housed in the upper tier of the bkoncepts Stand, at one side of the pitch, towards the University End. The view of the playing action is generally okay from this area, as are the facilities. The atmosphere is normally not bad too, with away fans being able to really make themselves heard. The close proximity of the home sections also helps with the banter.

It is a pity though that the Kop Terrace is closed as it is judged to no longer safe by modern standards. Having such a large area empty in th ground makes the stadium look more deserted than what it is. This feeling is not helped by the Club normally also closing the lower tier of the bkoncepts Stand in front of the away fans and also the lower tier of the University End, to the right of the visitors section.

At the back of the Yale Stand is the fair sized Centenary Club which allows in away fans. It is free to enter, has Sky Sports and also offers food in the form of Pie & Peas, it is also handy for the away turnstiles. There is also one pub right on the corner of the ground at the Kop End called ‘The Turf’. It is a Marstons pub which does allow in away supporters, but only in small numbers. It can get extremely busy, so arrive early. Continuing along Mold Road (passing the stadium on your right) and just past the Shell Garage on the left, is the Maesgwyn Hall Club which admits visiting supporters.

The favoured pub for away fans is the Plas Coch. As Darren Denby informs me; ‘it is a restaurant type pub, with a large beer garden, that is located past the ground going away from the town centre, near to the Sainsburys Petrol Station. It is about a five minute walk away from the stadium’. The pub is on the Plas Coch Retail Park opposite NEWI, where you can also park for the afternoon, at a cost of £2.

Paul Evans informs me; ‘About a 15 minute walk away on the High Street in the town centre (and not too far from Wrexham Central Railway Station) is the historic Golden Lion pub where the local beer from the Sandstone Brewery, Plassey Brewery and Wrexham Lager Brewery can be sampled. On Hope Street is the Horse and Jockey which is Wrexham’s oldest surviving pub. Frequented by the social/friendly drinker and small groups of Wrexham fans, friendly conversation can always be found beneath the timbers of this historic inn in another fantastic old style traditional boozer. Both pubs serve good grub too!’ Also on the High Street is the Royal Oak which is listed in the CAMRA Good Beer Guide and serves beers from the Joules Brewery.

Dylan Roberts advises; ‘Away supporters should avoid both the Barracuda Bar and Wetherspoons’. Alcohol is also available inside the ground in the form of bottles of Lager, Bitter and Cider.

From The South:  Take the M54 from the M6 (Junction 10A Northbound). Follow the M54 to the end of the motorway and join the A5 towards Shrewsbury. Continue on the A5 past Shrewsbury and Oswestry and then join the A483 towards Wrexham. Stay on the A483 as you reach Wrexham (this is the Wrexham by-pass). Then as above. Street parking.

If you arrive early (around 1-1.15pm) there is some street parking to be had, on the other side of the road from the car showroom by the Turf Pub. There is also parking available at the nearby Glyndwr University (£3) or there a couple of private car parks in the area, charging in the region of £2, including NEWI on the Plas Coch Retail Park.

Wrexham General Railway Station is located next to the ground and is only a few minutes walk away. Exit the station walk up the station approach road and at the top turn right along the main road. The ground is along on the right. It is served by trains from Wolverhampton and Holyhead.

In addition the Club make available a number family tickets in the Mold Road and Yale Stands:

If you require hotel accommodation in Wrexham then first try a hotel booking service provided by Booking.com. They offer all types of accommodation to suit all tastes and pockets from; Budget Hotels, Traditional Bed & Breakfast establishments to Five Star Hotels and Serviced Apartments. Plus their booking system is straightforward and easy to use. Just input the relevant dates and click on “Search” below or on the hotel of interest on the map to get more information. The map is centered on the football ground. However, you can drag the map around or click on +/- to reveal more hotels in the town centre or further afield. 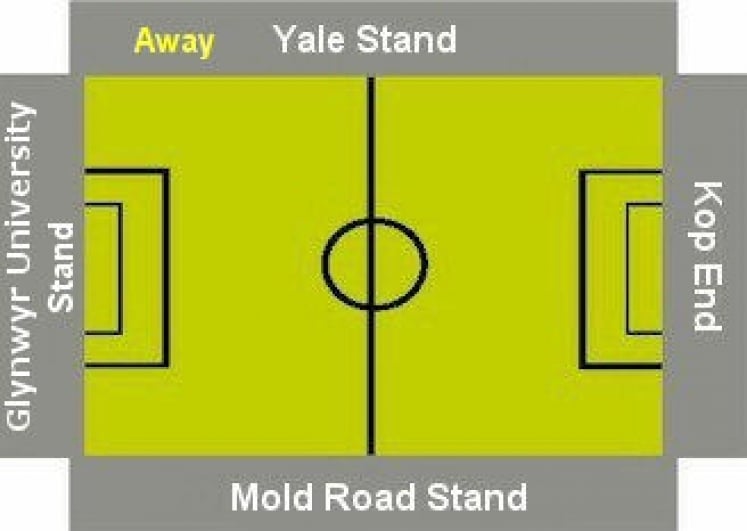