Prenton Park is dominated by the Kop Stand at one end of the stadium. This stand which was opened in 1995 has a large tall single tier which has a capacity of 5,696 seats and dwarfs the rest of the ground. Opposite is the Cowshed Stand, which got its name from the old stand that was there before it was built. This single tiered stand looks a little strange as one side of it has more rows than the other, giving a sloping effect. It has an electric scoreboard mounted on its roof. On the other side is the Johnny King Stand (formerly the Borough Road Stand and now named after a former manager), which is a small covered stand that runs the entire length of the pitch. Both these stands were also opened in 1995.

On the remaining side of the ground is the Main Stand, which was opened in 1968. It is a fair sized two-tiered all seated stand, that is covered. It has a larger upper tier and does contain a couple of supporting pillars. The team dugouts are also located at the front of this stand.  It has a capacity of 5,957. The ground in its corners has a set of four unusual looking floodlight pylons. Outside the ground, there is a statue of the Clubs’ most successful manager John King. Across the road from the main entrance to Prenton Park is an impressive looking mural painted on the side of a house, which was finished in 2019. It depicts images of  Ian Muir, the club's leading scorer, and Ray Mathias, who made the most appearances for Tranmere. Whilst below the players the artist has depicted the Camel Laird Shipyard and the Birkenhead Skyline when viewed from Liverpool.

The Club have announced that they are exploring the possibility of moving to a new stadium. It is believed that this would be an extension of a major regeneration project that has been proposed to transform the Birkenhead Waterfront. With a capacity of over 16,500 then this would be seen to be adequate capacity for the Club, however the Club believe that a new stadium would open up new revenue streams for the club, such as increased corporate facilities, event/conference space that they don't have currently. Plus the new stadium would be more accessible to people living in the Liverpool area, being not far from It's not far from the Woodside Ferry Terminal and Hamilton Square Railway Station. 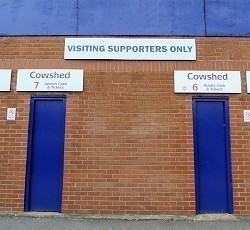 Away fans are housed in the affectionately named Cowshed Stand at one end, where up to 2,500 fans can be accommodated in this single tier all seated stand. You will be relieved to know that the only connection with a real cowshed is the name. As this covered, all seated stand, has good facilities and unhindered views of the playing action, being free of any supporting pillars. The concourses are of a good size and the acoustics of the stand good, meaning that away fans can really make some noise from inside this stand. The stand is also located close to the pitch, which is always positive.

Normally the prospect of a day out in Birkenhead doesn’t do much to heighten expectations, but the ground is in a pleasant part of town 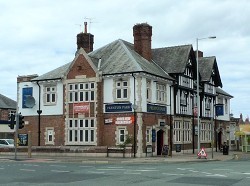 Outside the Main Stand, the Club have put together a Fan Parke, which visiting supporters are welcome to visit. Run by the Tranmere Rovers Supporters Trust, it not only has a giant screen showing televised football, but has a mix of music, street food, plus a bar serving amongst other things, real ales and craft beers. Also, part of it is housed in a covered indoor marquee. Just across the road from the away turnstiles is the Prenton Park Hotel (pictured right), which normally has a good mix of home and away supporters. Almost a stone's throw away along Prenton Park Road is the Birch Tree, which also welcomes visiting fans. Previously called the Mersey Clipper, it has been refurbished and is now part of the Flaming Grill chain. Apart from offering food, it also has the benefit of showing Sky and BT Sports. You can also park in their car park for £5, the price of which is redeemable inside the pub against the cost of food and drink.

Other pubs in walking distance of the ground are the Sportsmans Arms on Prenton Road East, which welcomes visiting supporters, as well as the Cock and Pullet on Woodchurch Road. David Sindall adds; 'The Cock and Pullet is about a ten minute walk away from Prenton Park and is great real ale pub. Otherwise, alcohol is available in the away end, in the form of Carlsberg Lager, John Smiths Smooth and Strongbow Cider (all £3.50, but no draught beer – only bottles or cans).

David Nicholson a visiting Carlisle United fan adds; 'Around the corner from the Prenton Park Hotel is a  Chinese takeaway which was doing a roaring trade on our visit. The fish and chips were delicious'.

All fans please note, it is a criminal offence to drink alcohol on the streets of Birkenhead, you may find yourself being arrested if you do.

From M6/M56 join the M53 and exit at Junction 4 and take the B5151 Mount Road from the fourth exit of the roundabout (the ground is signposted from here). After two and a half miles when Mount Road becomes Storeton Road, turn right at the traffic lights (there is a church on the far right hand corner) into Prenton Road West and the ground is down this road on the right hand side.

Sue Warwick adds; 'An easier route to the ground is to leave the M53 at Junction 3 and take the A552 Woodchurch Road towards Birkenhead. You will pass a Sainsburys and then as you reach the Half Way House pub turn right at the traffic lights onto the B5151 Mount Road. Take the first left for the ground'.

There is a car park at the ground which costs £5, otherwise, street parking, but beware that there is a strict local residents parking scheme in operation around Prenton Park. Further along Borough Road, going past the Kop Stand is a sports ground which has parking spaces costing £3 per car. You can also park at the Birch Tree pub, which is next to the stadium. It costs £5, but this is refunded inside against the purchase price of food and drink.

Jason a visiting Doncaster Rovers fan adds; 'I parked along Storeton Road, where there is on-street parking. There was plenty of room even with half an hour before kick off. However, be sure to turn around in the road (facing away from the ground) and you're travelling straight back to the motorway with no problem at all after the match has ended.'

I got hopelessly lost trying to find the ground and did actually end up at the Mersey admiring the views of Liverpool across the river. My frustrations were not eased, when on asking a local chap for directions to the football ground the guy replied 'Liverpool or Everton?' After asking about another three locals I finally found the ground after going round most of Birkenhead.

The closest railway stations are Rock Ferry and Birkenhead Central, both served by Liverpool Lime Street. Both stations are a fair walk from the ground (15-20 minutes). Philip Jackman provides directions from Rock Ferry station; 'Upon leaving Rock Ferry turn right and walk up Bedford Road for a fair distance until you reach a roundabout. At the roundabout, turn right into Bebington Road and walk along this road until you reach the Sportsman pub. Then turn left into Prenton Road and you will reach the ground and away fans turnstiles on your left.' Whilst Adam Hodson provides directions from Birkenhead Central; 'On exiting the station cross the road, turn right, then at the roundabout turn Left onto Borough Road (A552 towards) Heswall. Go through four sets of traffic lights passing a Shell Garage on the on the left hand side and at the 5th roundabout (signposted B5152 Clatterbridge and Tranmere Rovers FC), Walk straight through onto Borough Road and the Ground is on the right hand side after passing the Prenton Park Pub. It took around 15 Minutes from the station'. Alternatively you can get a bus to the ground from the nearby Conway Bus Station, by making your way through the Grange Shopping Precinct, which is located on the opposite side of the main roundabout outside Birkenhead Central Station. For bus services see below.

Tony Combes informs me; 'If coming from Liverpool Lime Street, the nearest Merseyrail Underground is Conway Park (New Brighton and West Kirby lines), alighting and ascending to street level. You can then get a bus from Conway Park Bus Station which is within 100 yards on your right. Buses: 41, 42, 71, 72, 403, 413, 423 all take to you the bottom of Singleton Avenue which is the alighting point.  The ground is then five minutes walk from here, heading along Borough Road.  Alternatively, the 164, 177 and 464 will take you almost adjacent to the ground, alighting at the bus stop opposite Bogan’s Carpets and the Prenton Park pub'. Jeff Banfield a visiting Newport County fan adds; 'You can also catch a bus from near Liverpool Lime Street Station to Birkenhead. There is the choice of Bus Numbers 464, 471, and 472, that operate every ten minutes or so on Saturday afternoons. The journey time is around 16 minutes. Leave Liverpool Lime Street Station via the main entrance and go down the steps. Cross the road and go down St Georges Place, which becomes St Johns Lane. Walk on the left hand side of the road and then turn left into Victoria Street. Cross over the road to the bus stop. It drops you off about a 100/150 metres away from Prenton Park.' For timetables see the Arriva Bus website.

* These prices are for tickets that are purchased prior to matchday. Tickets bough on the day of the game cost up to £2 more per ticket.

** Must be accompanied by an adult.

Please note that for Under 23's tickets in all home sections and for both Over 65's and Under 23's in the away stand. Tickets must be purchased from the ticket office and that proof of age will be required.

Book You Liverpool Or Local Hotel And Help Support This Website

If you require hotel accommodation in Birkenhead or Liverpool then first try a hotel booking service provided by Booking.com. They offer all types of accommodation to suit all tastes and pockets from; Budget Hotels, Traditional Bed & Breakfast establishments to Five Star Hotels and Serviced Apartments. Plus their booking system is straightforward and easy to use. Just input the dates below that you wish to stay and then select from the map the hotel of interest to get more information. The map is centered to the football ground. However, you can drag the map around or click on +/- to reveal more hotels in Liverpool City Centre or further afield.

Special thanks also to Owen Pavey for providing the ground layout diagram of Prenton Park. 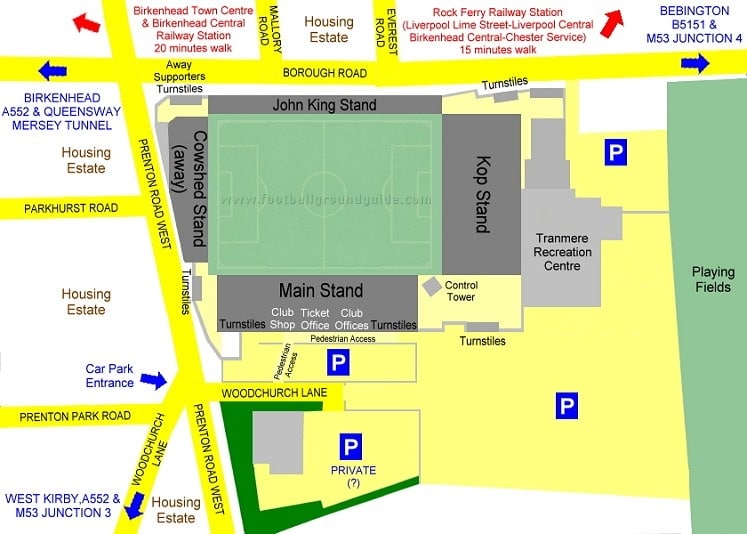