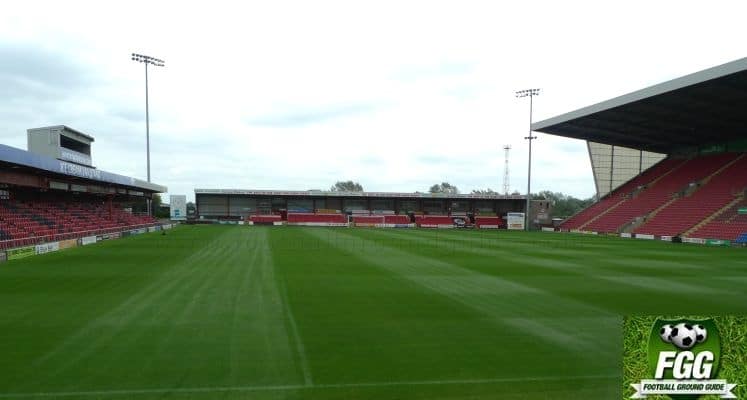 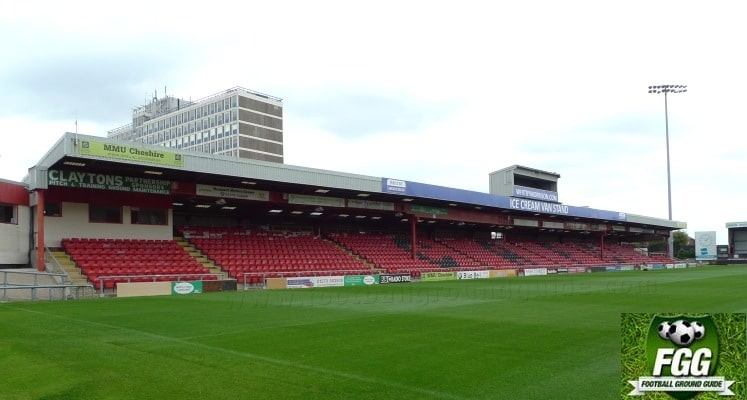 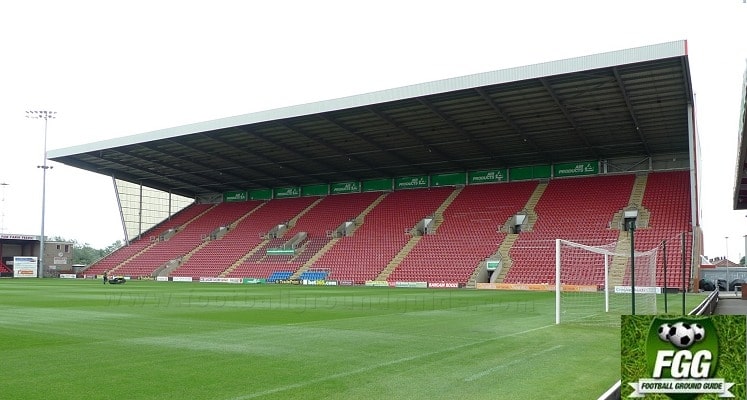 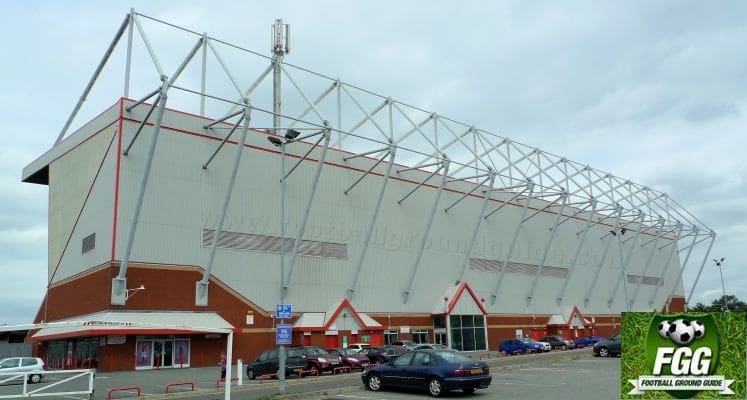 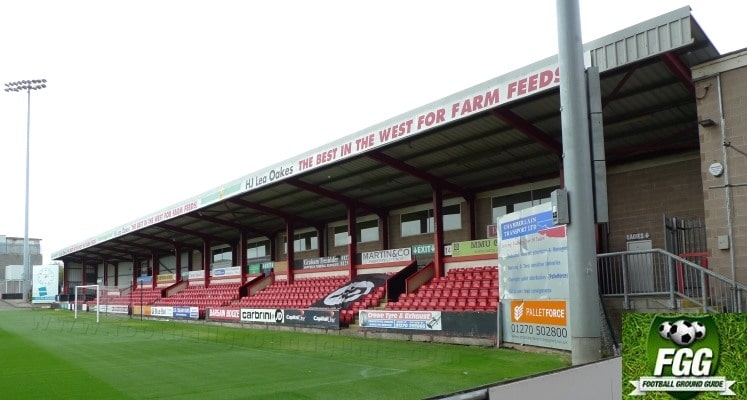 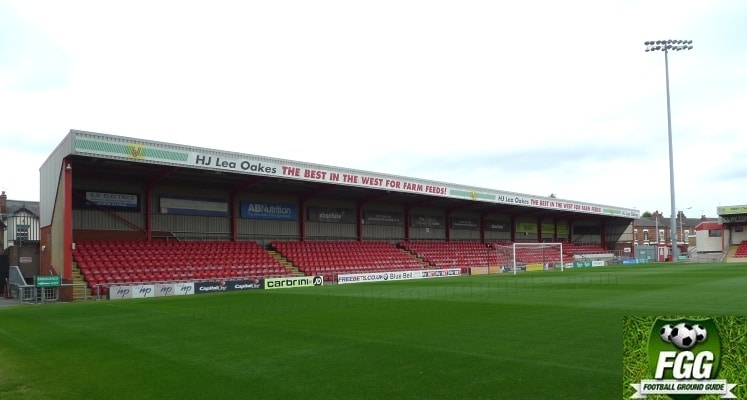 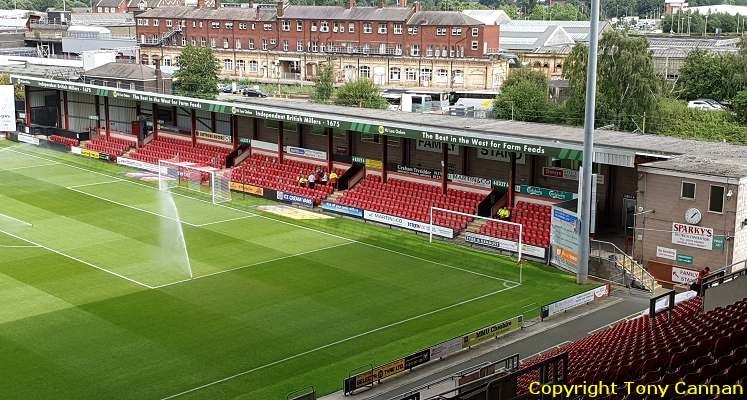 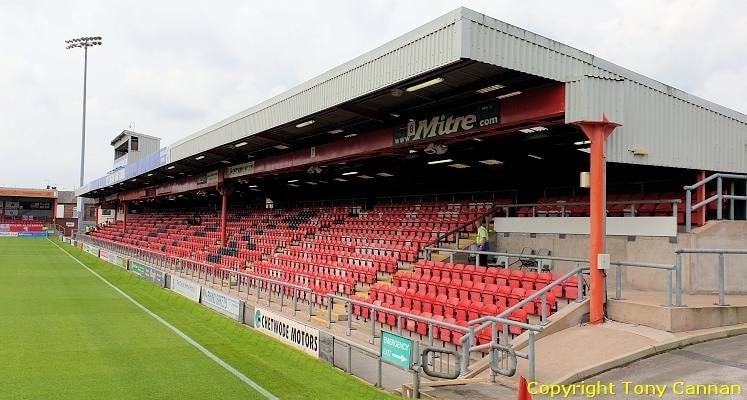 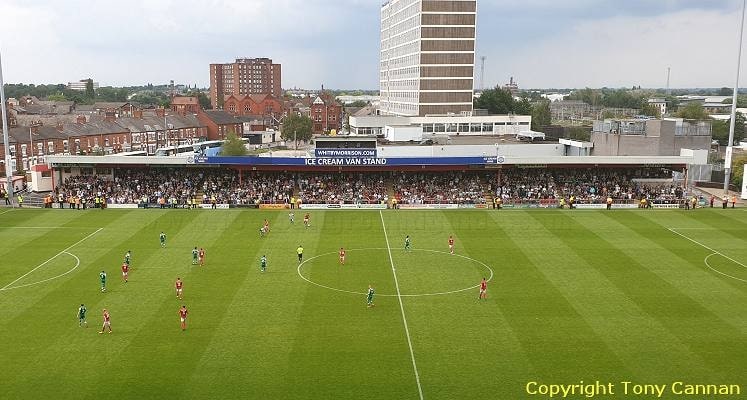 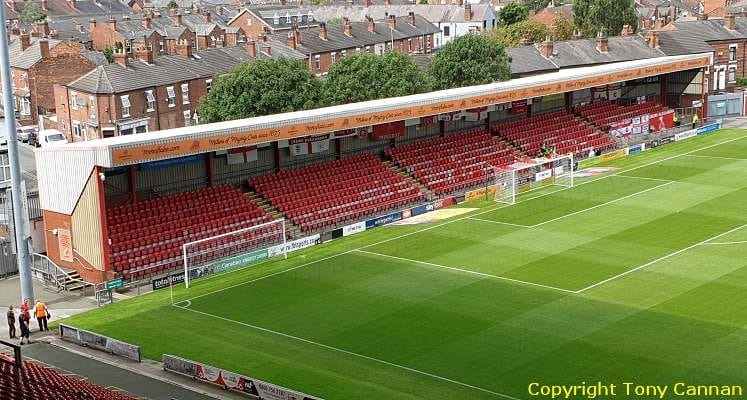 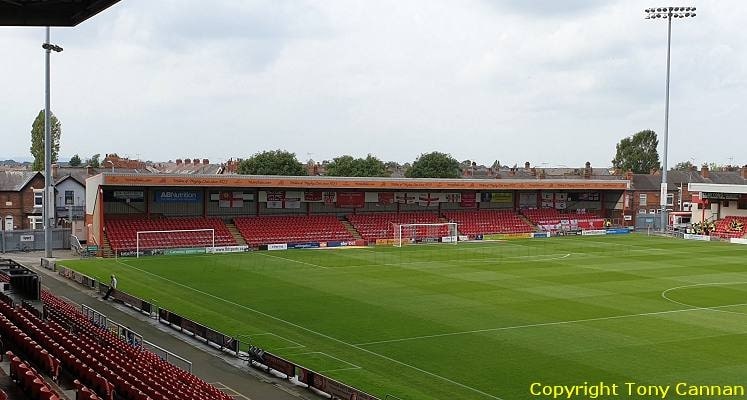 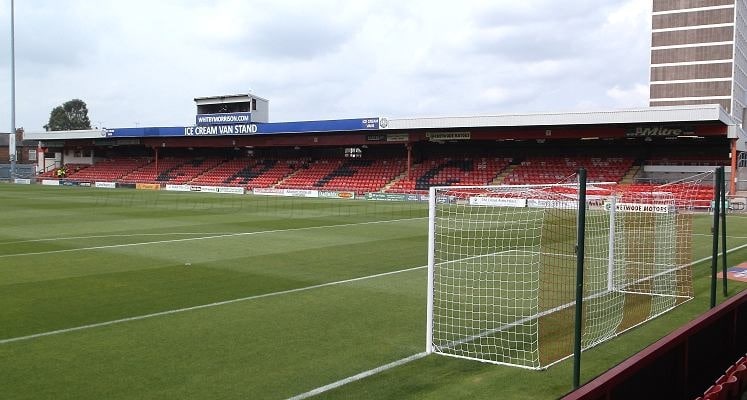 Although the football ground is officially known as the Alexandra Stadium, it is more widely referred to as Gresty Road, the street which it is located on. The opening of the £6m pound Main Stand in 1999 changed forever the look and feel of the ground. Before, it had always been small and homely, but the addition of the Main Stand has drastically changed the overall scene. The stand, which sits proudly along one side of the pitch, is a single tier cantilever holding just under 7,000 people. It looks huge compared to the other stands and is probably three times the size of the old Main Stand.  It is simply designed, sits well back from the pitch and has windshields to either side. Considering that the overall capacity of the ground is just over 10,000, one can understand how the Main Stand dominates Gresty Road, accounting for 70% of the available seating.

The other three stands are roughly of the same height, covered and all seated, but are rather small when compared to the Main Stand. So much so, that balls are regularly kicked out of the ground during a game. The newest of these smaller stands is the Gresty Road End, which is the home end of the ground. This replaced a former open terrace and seats around 900. Opposite is the Wulvern Homes Stand, which was previously known as the Railway End. This has some executive boxes at the rear, but the seating area is only opened for the bigger games. The Whitby Morrison Ice Cream Van Stand at one side of the ground, has an unusual television/press gantry on its roof. It almost looks as if part of a portakabin was at some point bolted onto the roof and it looks a bit precarious. In the corner between the Wulvern Homes and Whitby Morrison Ice Cream Van Stands is a large clock, whilst on the other side of the Whitby Morrison Ice Cream Van Stand is a Police Control Box, keeping a close eye on the away contingent.

An unusual feature is the absence of dugouts, the teams instead are given a section of seating at the front of the Main Stand. You will also notice that the pitch is slightly raised above ground level. The ground is completed with a set of modern looking floodlights. I noted that on the Main Stand side of the stadium additional lighting is present half way up the floodlight pylons. One assumes that the height of the new stand prevented enough light getting to the pitch and hence additional lighting needed to be subsequently added.

At some point in the future, the club hopes to replace the Whitby Morrison Ice Cream Van Stand (formerly known as the Popular Side) with a new two tiered stand, which will also contain executive boxes. Beyond that addition, developments are limited with the main change of note being the potential addition of a bar in the South Stand; this was submitted to the local council for approval back in the summer of 2021.

Away fans are housed in the Whitby Morrison Ice Cream Van Stand at one side of the ground. The whole of this stand is given to away supporters and houses 1,680 fans, though if required the Wulvern Homes Stand can also be allocated to away fans. Entrance to the away stand is by ticket only, which if you are not in possession of one already, then they need to be purchased from the ticket booth next to the supporters club at the entrance to this stand.

I found Crewe to be relaxed and friendly, making for a good day out. There was a large away support on my last visit which boosted the atmosphere of the ground, however I have heard reports that it can be a bit flat at certain games, even with the efforts of a drummer in the home end. There are a couple of supporting pillars in the Whitby Morrison Ice Cream Van Stand which if you are unlucky could affect your view of the playing action. There is a popular fish and chip shop just outside of the stadium, the smell of which, early in the game, wafts across the ground.

As an aside, this is the only ground when just sitting there minding my own business, during the first half, I suddenly get a big wet tongue in my ear! Now before you all starting thinking all sorts of connotations (and I should add that Mrs Adams wasn’t with me), it was in actual fact a black Labrador dog, that was the culprit. This was my introduction to Pebble the trainee guide dog, who had been brought to the match to get used crowd situations. Now just when I thought I had experienced it all on my travels…

If you get there reasonably early before the game, the supporters club at the ground allows small numbers of away fans in. There are also a number of pubs within walking distance of the ground. The pick of these is probably the Corner Bar at the Royal Hotel on Nantwich Road. As Barry Cutts a visiting Coventry City supporter adds; ‘I found the Royal Hotel to be a warm and welcoming drinking house. Turn left out of the railway station & the pub is 50 yards down this road on the right hand side. There is also a fantastic chippie opposite’. Although the pub does not look that welcoming, with a number of bouncers on the door, once inside you will find it okay. There are separate bars for home and away supporters, with away fans using the Corner Bar. Zane Alpine a visiting Walsall supporter adds; ‘We went to the Cheshire Inn pub a little further along Nantwich Road. It was popular with away fans, was showing the early kick off on large television screens and offered very reasonably priced beer’. Also, a few doors up from the Cheshire Inn is the Brunswick, which also admits away fans and shows televised football.

If you park on the industrial estate just off Weston Road, then on your way to the ground you will pass the Brocklebank Pub, a Brewers Fayre outlet, which is very popular with away fans. It is also has a large screen showing Sky Sports. You can also park in their own car park which costs £2.50.

For those who like their real ale then further down Nantwich Road on the right hand side just past the traffic lights is the Beer Dock, as Amber Edmonson explains; ‘The Beer Dock is not really a pub or a bar – it’s basically a shop with a licence to drink. Its only a small place and does get pretty busy especially on a match day, but it is worth a visit as it sells real ale (four on draft), craft beer and decent European lagers and ciders’. You can find our more information by visiting the Beer Dock website.

If you arrive early and have a bit of time on your hands then I would recommend a visit to the Borough Arms on Earl Street. The pub which, is listed in the CAMRA Good Beer Guide, is around a mile away (15-20 minute walk) from Gresty Road and has a large number of real ales, plus Belgian and German beers on tap. It has an impressive stock of continental bottled beers. Also in the town centre on Prince Albert Street is the Hops Bar, which also serves real ale.

Otherwise alcohol is available inside the stadium to away fans, albeit only plastic bottles of Carlsberg at £3 each.

Leave the M6 at Junction 16 and take the A5020 towards Crewe. Follow this road right into Crewe. At the roundabout junction with the A534, Nantwich Road, turn left. Gresty Road is down past the Railway Station on the left. Just before you reach this roundabout on Weston Road, you will see a sign pointing to the right, which displays; ‘Away Supporters On Street Parking’. This directs you to an industrial estate on the right of the road (you will also see the Volkswagen dealership, L C Charles on the front of it). It takes about 15 minutes to walk to the ground from here. Otherwise at the ground behind the Main Stand is a pay and display car park which holds 560 cars and costs £3.50 for the day. Obviously, this fills up quite quickly on matchdays.

Jonathan Niewiadomski adds; ‘On the A5020/Weston Road and just before the roundabout, there is a left turn signposted Weston Road car park, which is one of the railway station car parks. It costs £5 to park all day on Saturdays, Sundays and Bank Holidays. There are plenty of spaces (even with the bigger than normal crowd today), is a short walk from the ground and was good for getting away after the game. There is also the option of renting a private driveway near in the local area via YourParkingSpace.co.uk.

Gresty Road is a stadium name you hear and immediately think of Crewe regardless of how closely you follow the club; that’s what happens when a team plays their home games at the same stadium for so long. Crewe have been playing their matches at Gresty Road since 1906. Of course, there have been some major overhauls of the stands since then. The most notable is probably the rebuild of club’s main stand, which happened in the early 1930s; this was forced upon them when what, at the time, was their only stand was seriously fire damaged. Prior to life at Gresty Road, the club played games at Alexandra Rec and then across a number of pitches close to Crewe.

* Home Fans can gain discounts on these prices if they become club members.

Crewe vs Port Vale: Crewe is under half an hour away from Stoke-on-Trent. As such, games against Port Vale, who come from the north of the city, are pretty hot affairs. The fact the two sides have spent plenty of time in the lower leagues helps fuel that fire.

Crewe vs Stoke: As we have said, Crewe and Stoke are pretty close together. That brings about bragging rights. Beyond that though, the two don’t play much; that’s certainly true in recent years with Stoke having achieved much more success. The fact that Stoke vs Port Vale is a bigger match doesn’t help boost the animosity either.

Special thanks to Tony Cannan for providing some of the photos of the Alexandra Stadium Crewe.