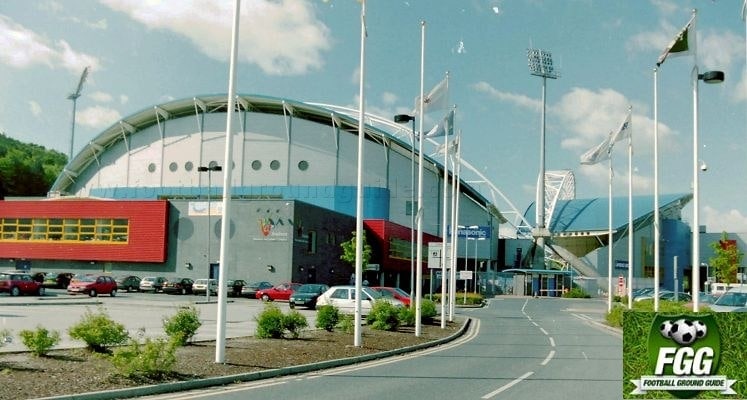 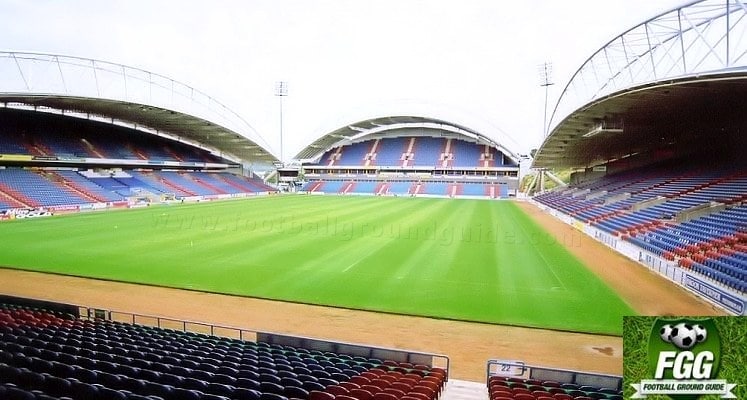 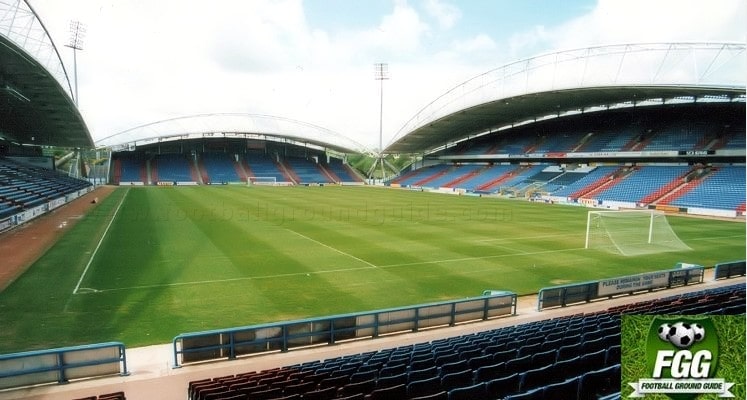 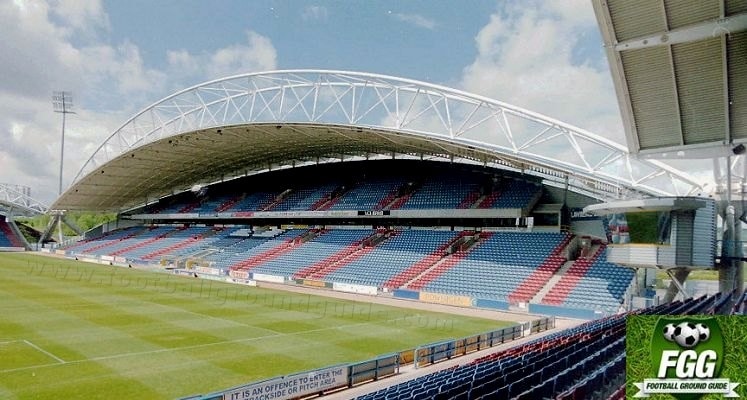 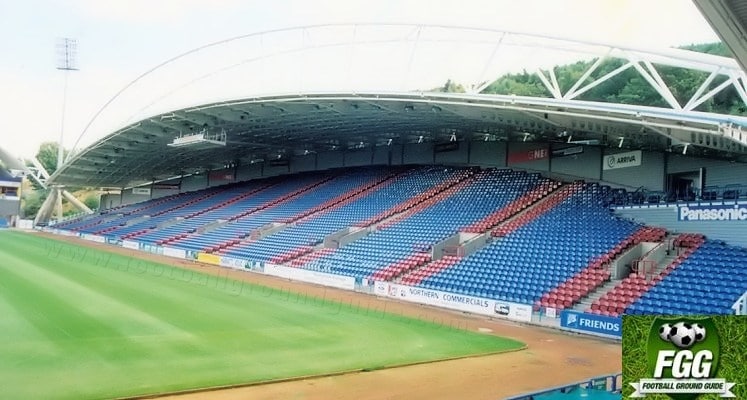 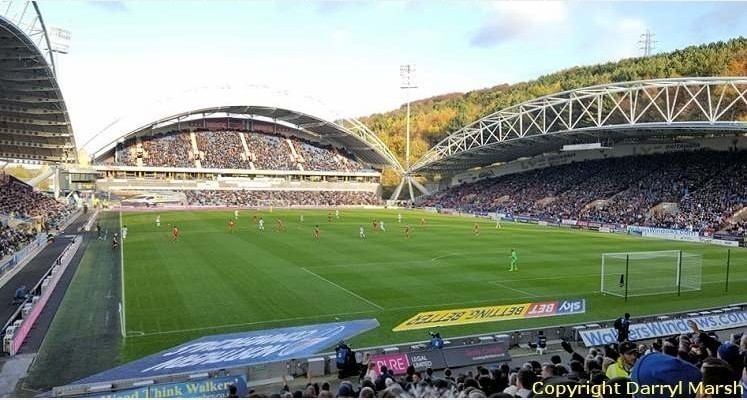 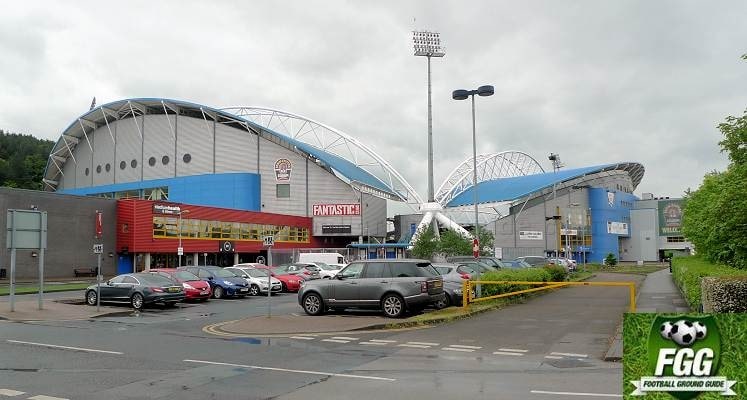 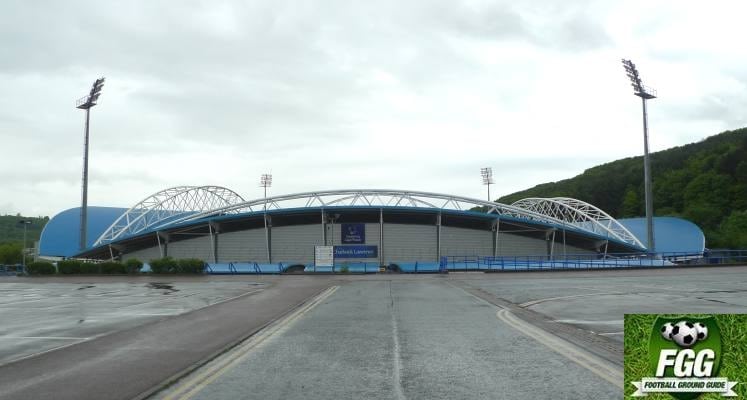 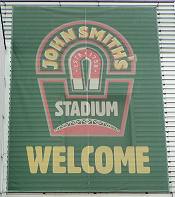 The club moved the short distance to the then called Alfred McAlpine Stadium in 1994 after leaving their former Leeds Road ground, their home for 86 years. When the stadium originally opened it had just three sides with the North Stand being opened later in 1997. In 2004 it was renamed the Galpharm Stadium, before becoming the John Smith’s Stadium in 2012, in a sponsorship deal with Heineken. Most new stadiums in this country are rather boring affairs with little character, but the John Smith’s Stadium does not fall into this category. Each stand is semi-circular rather than rectangular and is further enhanced with large white steel tubing above the contours. In fact from the car park, I first thought it looked like a new ride at Alton Towers! It is good to see something different from the architects for a change. The ground has won many design awards and is well worth a visit. The only disappointment is that the corners of the ground are open. The Fantastic Media North Stand at one end and the Revell Ward (Riverside) Stand at one side are both two-tiered stands, each with a row of executive boxes running across the middle. The other two sides of the ground are large single tiered affairs. One of these the Britannia Rescue Stand, at one side of the pitch, can accommodate 7,000 supporters. There is an electric scoreboard at the back of the away end. The stadium is completed with a striking set of four floodlights. The stadium is shared with Huddersfield Giants Rugby League Club.

Away fans are located at one end of the ground in the AbZorb (South) Stand, where up to 4,000 supporters can be accommodated. Expect to have a ‘pat down’ search before entering the ground, which still has traditional man operated turnstiles. The facilities in this stand and the view of the playing action are generally fine. The acoustics of the stand are good, meaning that a relatively small number of fans can really make some noise. There is also a Ladbrokes outlet and a bar serving alcoholic drinks at the back of the stand, which remains open during the first half and at half time. The only gripes are that the male toilets are quite small in terms of capacity, which makes a half time visit rather longer than expected and that the ‘concourse’ is mostly in the open air.

I have enjoyed my visits to the John Smith’s Stadium, I have always been thoroughly impressed with the stadium and the general set-up.

Food on offer inside the stadium includes locally produced pies by Jones Bakers; Meat and Potato Pie, Chicken Curry, Steak and Ale, Lamb Hotpot (all £3.50) and Vegetable Pasties (£3.50). The Club also offers a Pie & Pint for £7.50. After the match has ended catering staff will often sell off and left over pies for around a £1 each. Please note that the kiosks don’t take card payments.

On the main Leeds Road near to the stadium (on the opposite corner to the Mini Car Dealership and beside a Costa Coffee outlet) is the modern looking Yorkshire Rose pub. This pub normally has a mix of home and away fans in attendance and being part of the ‘Two For One’ chain also offers food. It is not particularly a large pub and does fill up quickly on matchdays, so if you intend going there, then get there early. Also a ten minute walk from the stadium is the Turnbridge Working Mens Club on St Andrew’s Road. This Club welcomes visiting supporters and is free to enter. You can also park in their car park for the game at a cost of £3.

Joel Mellor a visiting Liverpool fan recommends; the Magic Rock Tap bar within the Magic Rock Brewery on Willow Lane, about a mile away from the John Smith’s Stadium. ‘Great bar with great ales and excellent pork pies too.’

Although the Giants will still be allowed to play their games there, if the ownership of the Huddersfield ground is restructured, some adjustments will quickly be made. These are said to include plans for expanding the stadium’s megastore. Other improvements include things like more fan bars to improve the supporter experience with the intention to extend the stadium’s life till at least 2050.

The John Smiths’ Stadium is located just off the A62 Leeds Road. It can be easiest reached from Junction 25 of the M62. Simply follow the signs for Huddersfield (A62) and you will reach the stadium over on your left. The John Smith’s Stadium is generally well signposted around Huddersfield town centre

If approaching from the South, then leave the M1 at Junction 38 and take the A637 towards and then the A642 into Huddersfield. As you approach the town centre try to keep to the right-hand lane as you will turn right at the roundabout and onto the A62 Leeds Road. The stadium is a short distance down this road on the right.

Alternatively if coming up from the South and looking for somewhere to park then along St Andrews Road there are a number of small businesses that offer parking for around £5. To find these, then as you approach the town centre you will pass a Lidl store on your left. Go through the next lights and after passing a KFC and Iceland shop on your right, move over to the right-hand lane and then turn right at the next set of traffic lights into St Andrews Road. Keep straight along this road and you will soon see the stadium over on your right. There is no parking available for away supporters at the stadium itself. There is also the option of renting a private driveway near the John Smith’s Stadium via YourParkingSpace.co.uk..

The John Smith’s Stadium is walkable from Huddersfield Railway Station, it should take no more than 15 minutes at a comfortable pace. After coming out of the Railway Station, turn down past the front of The George Hotel. Go straight over the crossroads into Northumberland Street and walk down across the Ring Road straight on into Leeds Road. Turn right down Gasworks Street. Straight over the crossroads to the ground.

Huddersfield Town started playing at Leeds Road in September 1908, just a month after the club was founded. They remained there for almost 90 years. This changed after the Hillsborough disaster in 1989, in which 95 Liverpool fans were killed at the time. Off the back of this all teams in the first two divisions of the Football League were required to have an all-seater stadium by the 1994-95 season. Due to this, the Terriers started making plans for a new stadium in 1992.

The Kirklees Stadium was completed just in time for the 1994/95 season and the Terriers moved in after spending 86 years at Leeds Road. Changes to the new Huddersfield stadium have been minimal but the ground gas gone through a few name changes over the past three decades. It was named the Alfred McAlpine Stadium up until 2004, the Galpharm Stadium up until 2012, and John Smith’s Stadium until this very day.

This figure was also equalled for the Premier League match against Manchester United played on October 21st, 2017.

Huddersfield vs Leeds: Both these teams are situated in West Yorkshire and their rivalry is further spiced up by the fact they’re the most decorated teams in the area. It’s not all about football though because Huddersfield and Leeds rugby sides aren’t big fans of one another either.

Huddersfield vs Bradford City rivalry: Another West Yorkshire rivalry but with less glamour and more guts. One of the most famous moments in this fixture came when Huddersfield’s Kevin Gray broke Bradford City’s Gordon Watson’s leg in two places; it ended up being the most expensive tackle in British football history as Watson was awarded near to £1m in damages.

Huddersfield vs Oldham Athletic rivalry: Meetings between these teams are known as the A62 derby or, more elegantly, the War of the Roses. The latter name comes from historic battles between Yorkshire and Lancashire, where both teams are situated.

Special thanks to Darryl Marsh and Owen pavey for supplying the John Smith’s Stadium Huddersfield Town photos of the North and East Stands and external view.