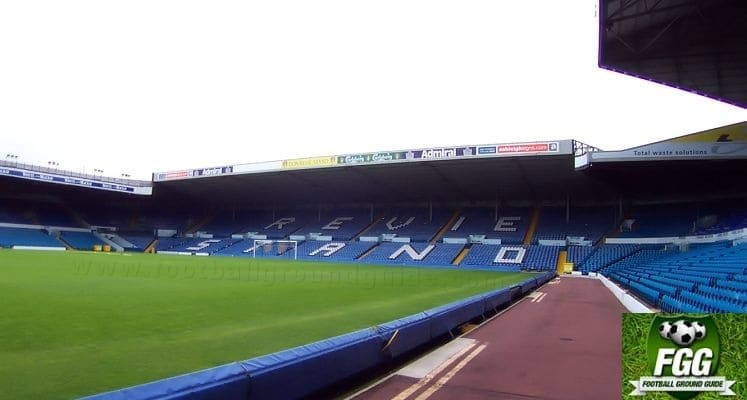 Elland Road is dominated by the East Stand on one side of the stadium. This huge stand which holds around 15,000 supporters was opened in the 1992-93 season and is at least twice the size of the other three stands at Elland Road. The East Stand is a two-tiered stand which has a large lower tier of seating with a smaller tier above. In-between the two tiers is a row of executive boxes. The stand is completed by a large imposing roof. The good thing about the rest of the stadium is that it is totally enclosed, with the corners of the ground being filled with seating. The downside is that compared to the East Stand the other stands are looking rather tired and old in comparison. All the remaining stands have a number of supporting pillars and at the back of the West Stand (which was renamed in March 2004, the ‘John Charles Stand’ in honour of their former great player), there are a number of old wooden seats, which look as if they have been there since the stand was first opened in 1957. This stand also houses the team dugouts and television gantry. There is an electric scoreboard in one corner of the ground between the South & John Charles Stands. Outside the stadium, there are statues of Billy Bremner and Don Revie.

The idea of an extension to Leeds United’s stadium has long been on the menu. Now, with the side back in the big time, the plans can start to become a reality. That’s exactly what looks like happening too with the latest reports being the Elland Road hierarchy are putting stadium before training ground. What does it mean for Leeds United’s ground? Well, a revamp of the West Stand is the most noteworthy with that expansion behind most of the additional 17,000 seats.

Away fans are housed on one side of the John Charles Stand (towards the South Stand). The normal allocation is 1,566 seats in the upper tier and if required then a further 1104 seats can be provided in the lower tier, making the overall allocation 2,670. Entrance into the ground is via electronic turnstiles, where you need to insert your ticket into a barcode reader, to gain access.

The seating in the John Charles Stand is a mixture of old wooden and plastic seats. The leg room is sparse, plus there are a number of supporting pillars running along the front of the upper tier which could impede your view. So you may be better getting a ticket for the lower tier where your view is unobstructed. The facilities within the stand are okay, although parts do look a little dated. There is normally an excellent atmosphere generated within the stadium, with at times noise coming from every area of the ground. There is normally plenty of banter exchanged with the Leeds fans in the home end to the right of the away section. The stewarding is normally friendly and courteous.

Food on offer on the concourse includes; a range of Holland’s Pies; Peppered Steak, Chicken Balti, Potato and Meat and Cheese and Onion (all £3.80), as well as Burgers and Hot Dogs.

Although Elland Road had stood since 1897 it wasn’t until some 23 years later that Leeds United would move in; it cost them all of £250! Admittedly, that wasn’t the insignificant sum back in 1920 like it is now in football. The ground served them well though with next to no changes or upgrades being made until the fifties. Even then it was only the addition of floodlights. Three years later, in 1956, change was forced upon them though as the West Stand – now the John Charles Stand – was burned down. It cost £100k to repair!

12 years on – and after a record crowd of 57,892 was recorded – proper redevelopment was on the table. The Gelderd End was built fully complete with a roof and by 1974 each of the other stands had been tatted up too. The total cost stood at £900k. Fast forward 18 years and the East Stand was under the knife again; this time it came back as a 17,000 seater stand and three years later Leeds’ Elland Road stadium became 100% seated. Other major changes since that day have been discussed but, as yet, wholesale change is yet to happen.

At the ground itself next to the away turnstiles is the entrance to Howards, which is a small bar for away supporters only. Opening two hours before kick off, you need to show your away ticket to gain entrance. Outside the North East corner of the stadium, there is a small fan zone, which has live music and a number of food and drink outlets, some of which serve alcohol. Although primarily for home fans, some visiting supporters have been using the facility too.

Otherwise, there is the Drysalters pub which is about a ten minute walk away from the ground. On my last visit, it had a good mix of home and away supporters, had real ale, plus large screens showing televised football. To find this pub; with the Old Peacock pub behind you, turn left and follow the road down to the very end. Pass the entrances to a number of car parks and go under a railway bridge. At the end of the road, turn left along the dual carriageway and the pub is a short way down ‘tucked in’ on the left. Otherwise, alcohol is served within the ground in the form of draught Fosters Lager, John Smith’s Bitter and Strongbow Cider (all £4 a pint), Strongbow Dark Fruit Cider (£4.50), plus small bottles of red and white wine (£4).

Just a few doors down from the Old Peacock pub (which is behind the South Stand and is not recommended for away supporters) is the Graveleys chippy, which does brisk business on matchdays. There is also a McDonalds outlet situated across the road from the East Stand.

Elland Road is well signposted around the Leeds area and is situated right by the M621.

From The North
Follow the A58 or A61 into Leeds city centre, then follow signs for the M621. Join the M621 and after one and a half miles leave the motorway at the junction with the A643. Follow the A643 into Elland Road for the ground. Go down Elland Road past the ground on your right and the Old Peacock pub on your left, you will come to a couple of entrances to a couple of very large car parks (£5).

From The South
Leave the M1 at Junction 43 and take the M621, towards Leeds City Centre. You will pass the ground on your left and then you need to leave at the next Junction 1 and turn left onto the A6110 ring road. Take the next left onto Elland Road for the ground. Just as you go under a railway bridge there are entrances on either side to a couple of very large car parks (£6).

Surprisingly (considering the number of vehicles) the traffic leaving the car parks seemed to disperse quite well after the end of the game. Richard Drake informs me; ‘a good tip for Elland Road is to park in Car Park A. They normally put away fans coaches here. From here we were back on the M621 within 10 minutes of coming out of the ground.’ There is also the option of renting a private driveway near Elland Road via YourParkingSpace.co.uk.

Leeds Railway Station is around a 35 minute walk from Elland Road. Probably best to either take a taxi or one of the shuttle buses, that run from near the station to the ground. Franklin Delvael a visiting fan from Belgium informs me; ‘The shuttle buses cost £2.50 return. The pick up point is in Sovereign Street, opposite the Hilton Hotel (on Neville Street), about a two minute walk from Leeds train station. The buses drop you off at the ground on Lowfields Road, at the corner of the South and East Stands’.

Tom Whatling adds; ‘As you come out of the station main entrance, cross the road and take the stairs down to the street below. Turn right and cross the road and you will see the double-decker buses lined up. The first bus in the queue also sells the tickets for all the other buses. It’s best to get a return ticket as then you don’t have to queue up after the match to get a ticket back to the station, you just walk straight onto the bus’.

Nicholas Small a visiting Wolverhampton Wanderers supporter provides the following directions if you decide to walk; ‘It is best to leave the station from the rear exit, from where you can walk down the short hill out of the car park and follow the road around to the left. At the traffic lights go ahead (the road bears slightly left) and follow Whitehall Road for just shy of half-a-mile, passing under a railway bridge and then forking left down Springwell Street, to cut off a corner. At the end of Springwell Street, you come to a roundabout exit road with a zebra crossing in front of you. Cross at the zebra crossing, taking the next exit road clockwise around the roundabout. This is the A58 Domestic Road. This road becomes Domestic Street after about 400 yards (Domestic Road turning right and heading up to an overpass) and continues slightly uphill for about another 400 yards, passing under another railway bridge. There is a zebra crossing up here, which you should use to walk up the right-hand pavement. Upon reaching the top of the hill, you come to a garage, and some small shops, where you should turn right onto Shafton Lane. At the end of Shafton Lane, turn left onto Ingram Road and follow this until you see a pedestrian bridge ahead, as the road bears left, becoming Tilbury Road. By now, you should have seen the football ground over to your right. Cross the M621 via the footbridge, turning right at the bottom, and head down Elland Rd towards the stadium’.

The Club operates a category system, so that ticket prices vary with the opposition being played. The categories are A & B. Category A prices are shown below with Category B prices in brackets:

Concessions apply to: Over 65’s, Under 23’s and Full Time Students.

* These prices are for tickets bought in advance of the game. Tickets bought on the day of the match can cost up to £5 more per ticket.

Leeds Man United rivalry: If you believe the story then the Leeds Man United rivalry goes back to 1455 when the War of the Roses began. Whether that intense disgust for one another remained all the years later when Leeds and Man United first met in 1906 cwho knows. What we can say for sure is that since the sixties there has been little love lost. The Matt Busby and Don Revie days really started things up with title fights and high profile cup brawls. Hooliganism and player transfers – like Gordon McQueen, Eric Cantona and Rio Ferdinand – over the years have ensured Elland Road still has sparks fly when United visit Leeds’ ground.

Leeds vs Sheffield United rivalry: Leeds and Sheffield are the two biggest cities in Yorkshire. As a result, the games between Leeds and the Blades take on a special atmosphere.

Leeds vs Sheffield Wednesday rivalry: See above. With Wednesday a major team in Yorkshire it’s little surprise they and Leeds brings extra heat.