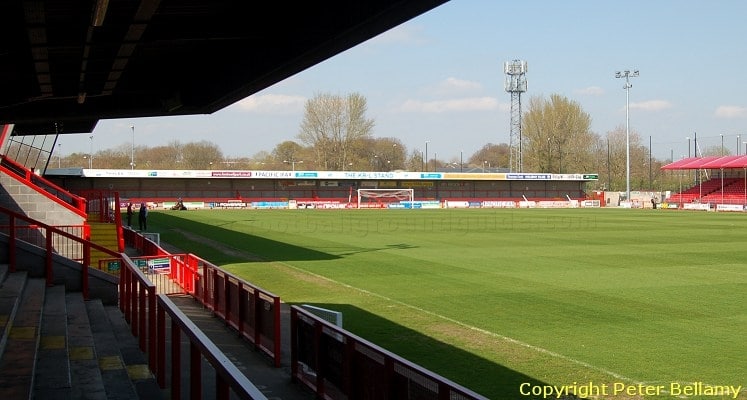 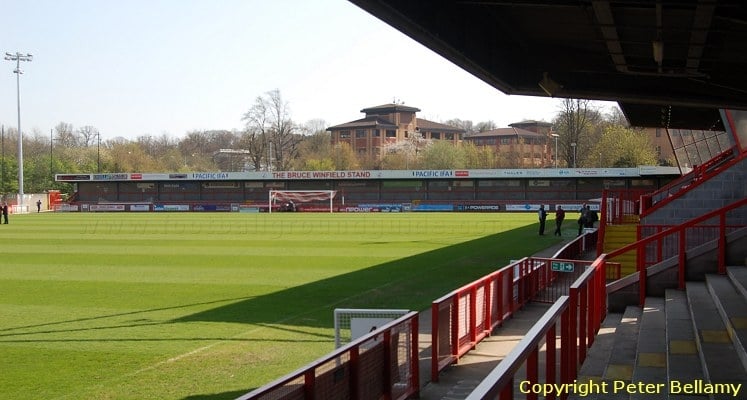 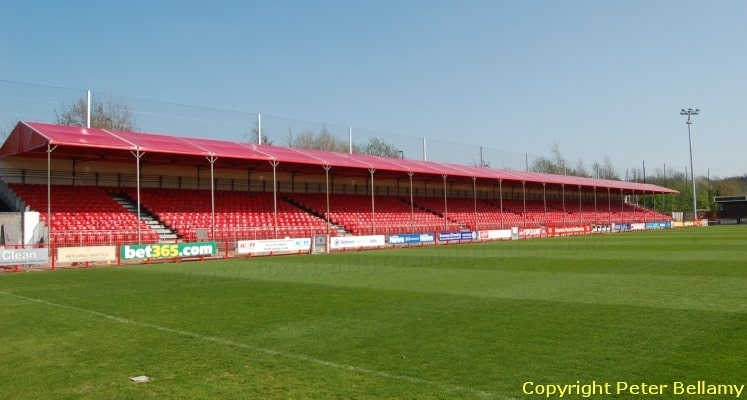 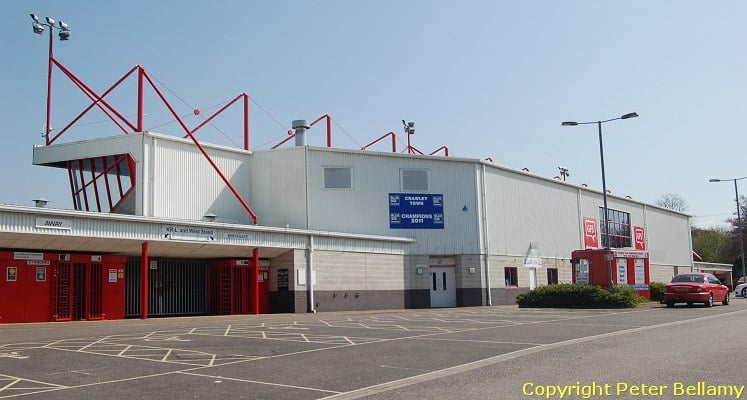 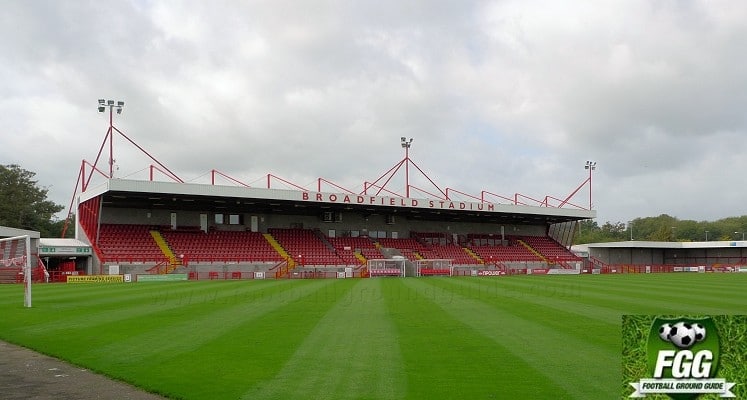 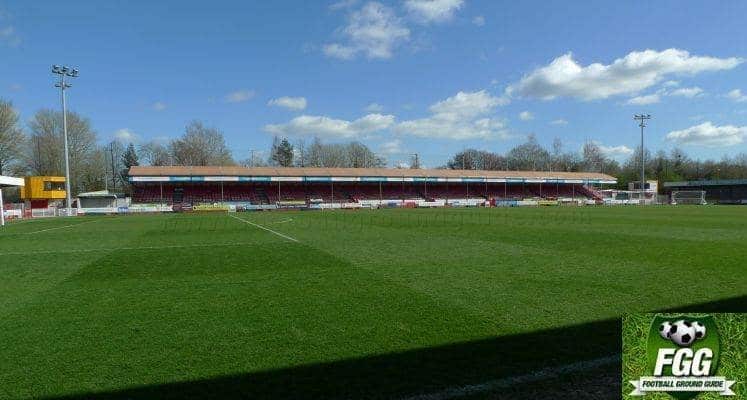 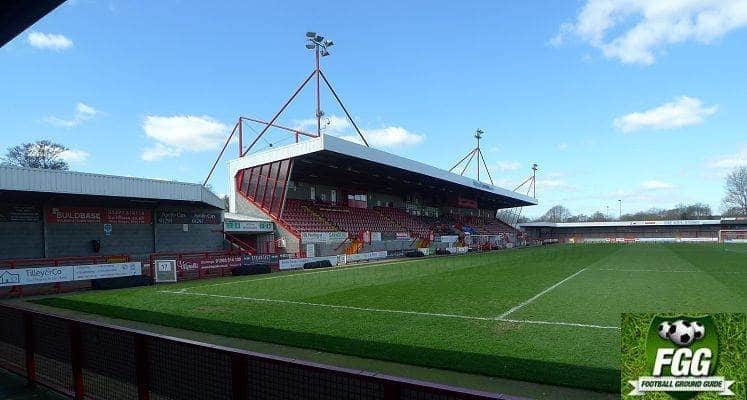 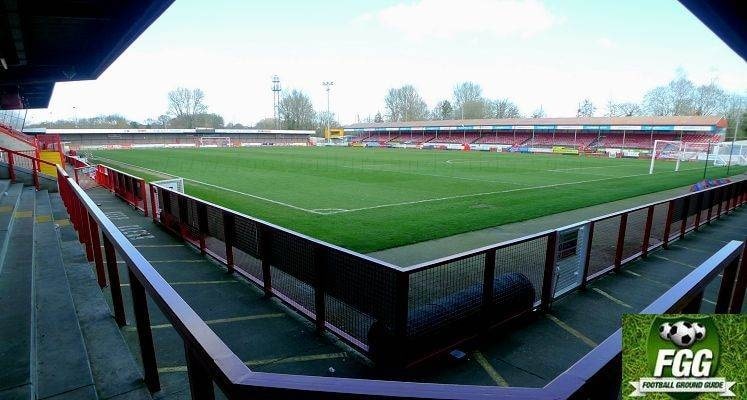 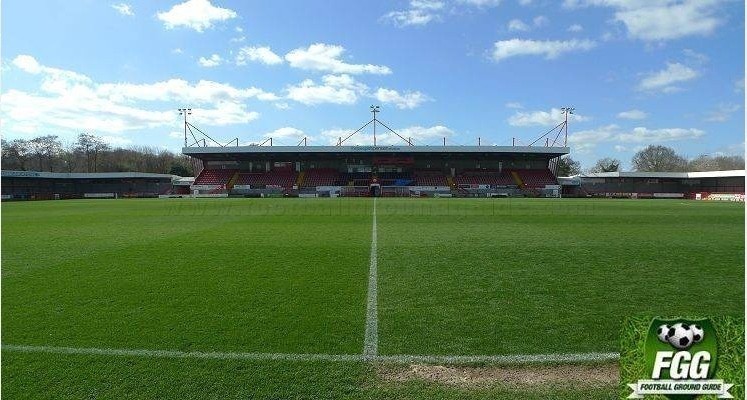 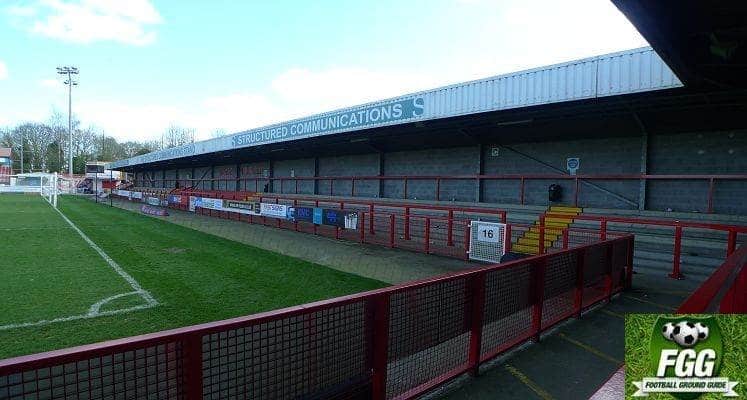 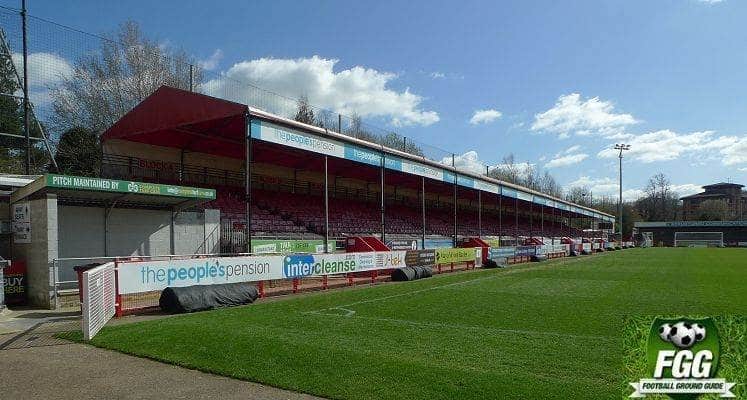 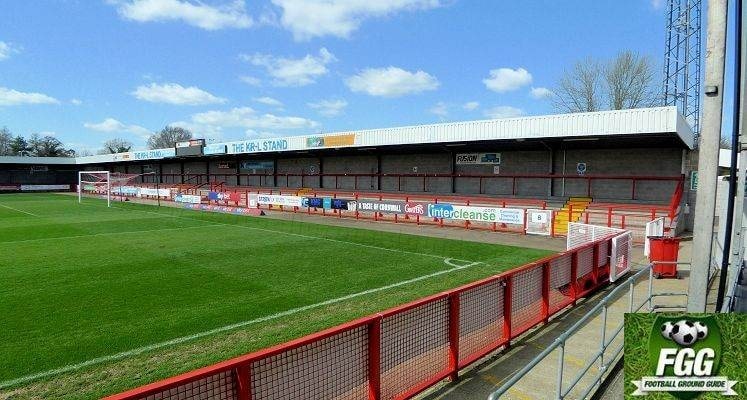 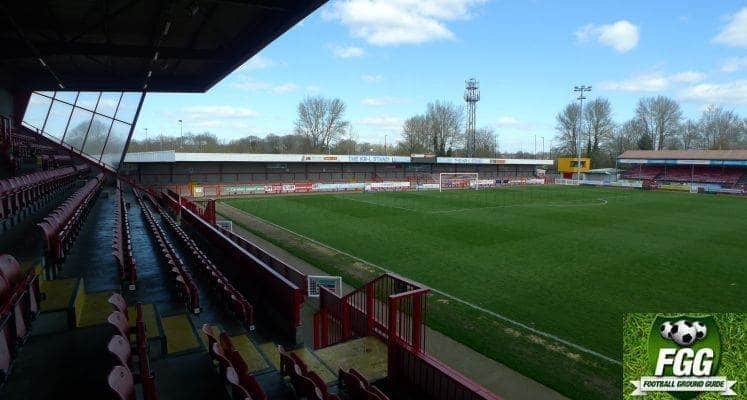 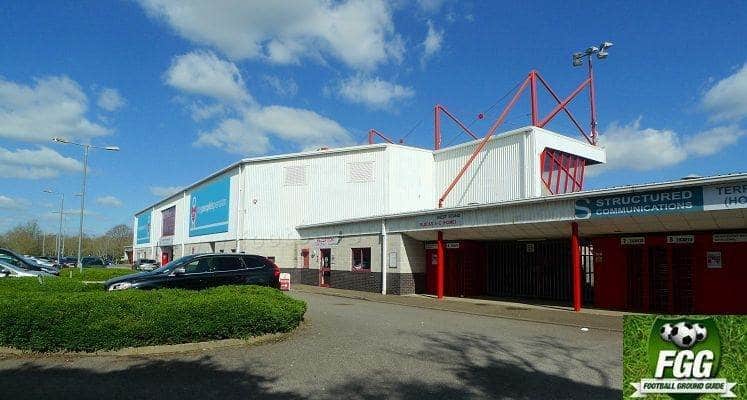 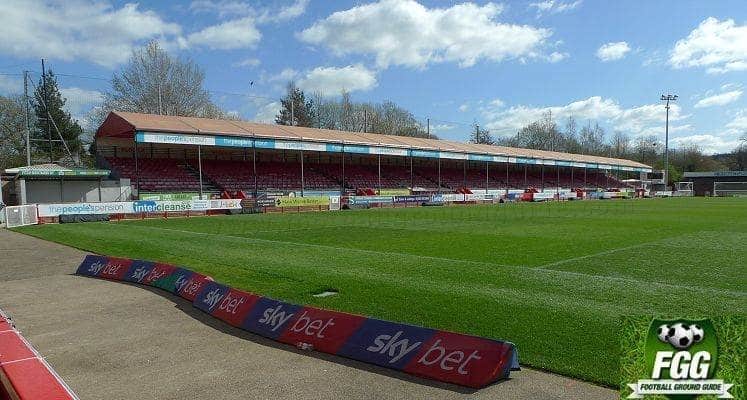 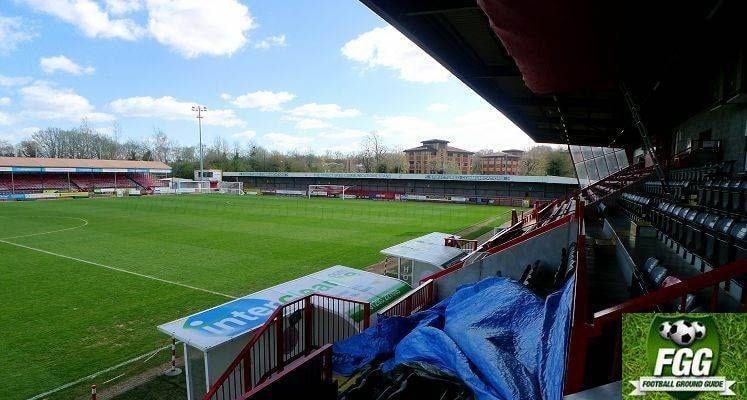 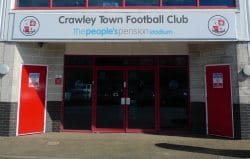 This relatively new stadium was opened in 1997, the Club moving there from their old Town Mead ground. The stadium looks to be a quality one in terms of standard of build. It is dominated by the good sized West Stand on one side. This smart looking stand is covered, all seated and runs for about two thirds the length of the pitch. It is raised above pitch level meaning that fans have to climb a small flight of stairs at the front to enter the seated area. The stand also has windshields to either side, plus three unusual looking floodlight pylons on its roof. It has a capacity of 1,150 seats. Opposite is the new East Stand which was opened in April 2012. This semi-permanent all seated stand accommodates 2,145 spectators in 12 rows of seating. The stand does though have a fair few supporting pillars running across the front of it, that could impede your view. A pair of new floodlight pylons have also been erected to either side of the stand. Both ends are virtually identical, being small covered terraces that extend around both corners of the ground towards the West Stand, enclosing the stadium at those points. The stadium perimeter is surrounded on two sides by a number of trees, giving a rural look.

In December 2018 Broadfield was renamed The People’s Pension Stadium in a corporate sponsorship deal.

For some teams they’re going through relocations whist others are adding thousands of seats to their capacity. Not Crawley. They’re stadium plans are much more on the smaller side with the next change expected to be a large screen to aid the match day experience. 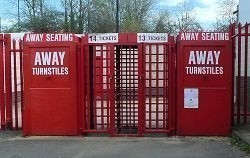 Away fans are primarily housed in the KR-L Stand at the north end of the ground. This mostly covered terrace can accommodate up to 1,600 fans. A small number of seats are also available to away supporters in the temporary East Stand. The segregation of the terrace can be adjusted depending on the size of the away following. For example, clubs will a small following will be given only the North West corner up to the corner flag, whilst the largest will be allocated that corner plus the whole of that end. The facilities at the stadium are pretty good and it is normally a relaxed and enjoyable day out.

There is a bar at the stadium at the back of the Bruce Winfield Stand called the ‘Redz Bar’, which allows in away fans before (but not after) the game. The entrance to this bar is gained from outside the stadium. Peter Bellamy informs me, ‘The closest pub to the stadium is the New Moon on Brighton Road (A2219). This is about a five minute walk away going towards the town centre. Another pub close by is The Downsman, which is on Wakehurst Drive, just off Southgate Avenue’.

To find these pubs, come out of the stadium car park entrance and turn right and go back up to the main roundabout. Cross the dual carriageway using the underpass and go straight on into Southgate Avenue (A2004). For the Half Moon take the first left off Southgate Avenue into Brighton Road (A2219) and the pub is further up the road on the right. For the Downsman also go to Brighton Road, then take the first right into Wakehurst Drive. Continue along Wakehurst Drive to find the pub on the left. Please note that alcohol is NOT available inside the ground for away supporters. 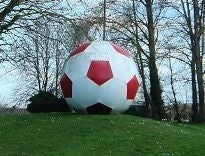 From the M25 take the M23 Southbound towards Gatwick Airport and Brighton. At the end of the M23 (before it becomes the A23) leave the motorway at the last exit, Junction 11 (signposted A264 Horsham, Pease Pottage Services). At the roundabout at the end of the motorway slip road turn right onto the A23 going towards Crawley. The ground is down on the left just before the next roundabout. It is a little obscured by trees, so look for the large red and white football on the roundabout itself and you will see the stadium entrance. Turn left at the roundabout and then left again for the stadium car park.

Car Parking
The car park at the stadium which costs £5. Peter Bellamy adds; ‘There is an overflow car park in the offices at Broadfield Park, which is accessible from the A23 as you come down the hill from the motorway’. This car park holds 350 cars and is free. It is also handy after the game to get back out onto the A23. Look out for the Broadfield Park Business Centre sign and left hand turn as you near the stadium on the A23. Otherwise street parking. There is also the option of renting a private driveway near in the local area via YourParkingSpace.co.uk.

Please note that after the end of the game it can take quite a while to exit the stadium car park. So if you are looking for a quick getaway after the game, then it may be an idea to street park instead.

Crawley Railway Station is just over a mile away from Broadfield Stadium. You can either take a taxi (about £6), or from the bus station across the road, you can take a Fastway number 10 bus to the ground (this runs every ten minutes). Otherwise it is about a twenty minute walk.

As you come out of the station turn left and walk down to the T-junction. At the junction turn left into Brighton Road. Keep walking straight down Brighton Road for just under a mile and at its end turn right. You should now be able to see the stadium in the distance behind the traffic island. Use the underpass to cross the A23 to the ground.

Crawley vs Woking rivalry: Crawley are rivals with Woking for a similar reason to Aldershot. They played at a similar level for a while and, again, are under 60 minutes apart.

Crawley vs Brighton rivalry: Just 20 minutes of A23 separate Crawley and Brighton. If the two find themselves facing off on a regular basis – which looks somewhat off at the moment – the rivalry will build very quickly. At present, Brighton are just a source of great jealousy for Crawley as they aspire to be like their nearby Seagulls.

Crawley have been at Broadfield Stadium for coming on a quarter of a century; they moved in 1997 after leaving their home of 48 years, Town Mead. It has remained untouched in the most part over that time but 2012 did see emergency building works carried out to meet minimum league requirements on capacity. The Crawley stadium maxed out around 500 seats short of what the league stipulates as a minimum; a seven day blitz brought the ground in line with what was needed.