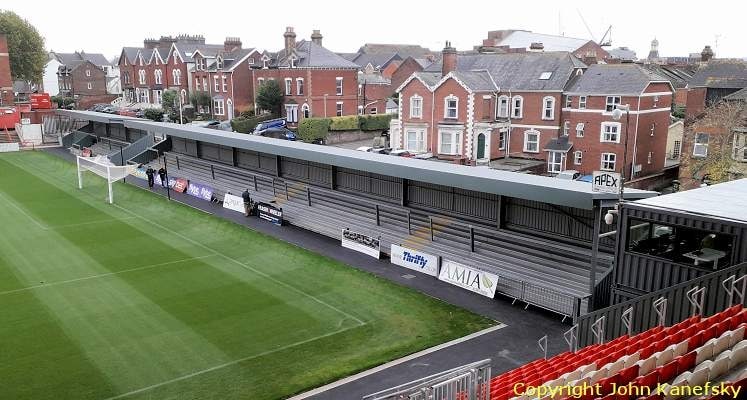 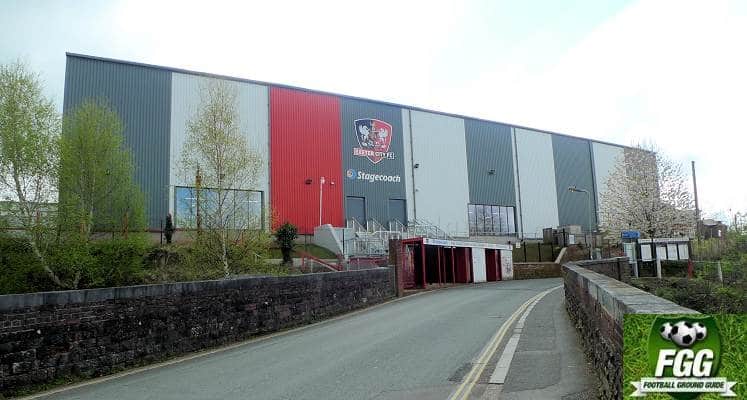 St James’ Park has undergone somewhat of a transformation recently, with new stands being built on two sides. The most impressive of these is the Stagecoach Adam Stansfield Stand (named both after a Sponsor and Former Player), which was opened in October 2018. This single cover all seated stand has a capacity of 1,600 seats, housed in a single tier of four blocks. The stand doesn’t run the full length of the pitch, meaning that there is a sizeable open gap in-between it and the Thatchers Big Bank Terrace. This is due to the close proximity of a railway line behind that part of the stadium, making it unpractical to construct anything sizeable in this area.

Opposite is the IP Office Main Stand. This stand was opened in 2001 and is again a covered all seated stand, which runs the full length of the pitch. This stand has a capacity of 2,116 seats. It also contains a Directors’ box, some executive boxes and a hospitality lounge, which are located in the middle to the rear. It also has the team dugouts located out front. The red colour of the seats of the stand have somewhat faded over time in the sunshine and it now looks a little tired in comparison to the new Stagecoach Adam Stansfield Stand. Unusually at the back of the stand on either side, there is a gap between the roof and the seated area.

Probably the most impressive aspect of the ground is the ‘Big Bank’ covered terrace, at one end, which was opened in February 2000. With a capacity of around 3,950 is now the largest terrace left in the English Football League. At the St James’ Road End of the ground, a small covered terrace has been erected for the use of away fans. Using components of a stand that was previously in place at the Hive Stadium Barnet, it has a capacity of 950 supporters, housed along ten steps, and is a vast improvement on the small open terrace it replaced. plus new toilet and refreshment facilities have been put in place behind this stand. Oddly the terrace is split into two separate areas, with a stadium access point located in-between. A new Police Control Box has been built to one side of this terrace in the corner by the Stagecoach Adam Stansfield Stand. 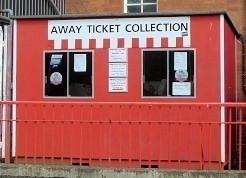 With the opening of the Marsh Kia St James’ Park Stand at one end, visiting supporters now have a choice of terrace or seating. The new terrace is covered and although still on the small side, being ten steps high, it is a vast improvement on the open terrace it replaced. Not only is it covered, but new refreshment and toilet facilities have also been built. The roof should also boost the atmosphere within the ground. The terrace which is split into two blocks and has a total, capacity of 950, with 200 being housed in the smaller block (located towards the Main Stand). Look out for the pair of very old turnstiles, that have been preserved behind the terrace.

Seating for Away fans is provided in the IP Office Main Stand (towards the St James’ Stand End) on one side of the pitch, in blocks L and M, where around 350 tickets are made available. This modern stand is covered, however, the facilities are looking a bit tired. It is though free of any supporting pillars, meaning that you get a good unobstructed view of the playing action. I personally have enjoyed my visits to St James’ Park, with no problems experienced. Inside the ground food on offer includes; Hot Dogs (£3), Pies (£3), Pasties (£3), Sausage Rolls (£2) and Cheese Slices (£2). There is a Social Club at the ground itself, which allows in away supporters. Outside the Ivor Doble Stand the club have set up a small Fan Zone which away fans can use. It has a mixture of eating and drinking outlets, plus alcohol can be purchased. Paul Stillwell a visiting Luton Fan informs me; ‘Just a minute walk from the away end of the ground is the St Anne’s Well on Well Street. Local ales, nicely cooked food, Wifi, BT and Sky Sports and friendly bar staff. It is very popular with away fans’. About a ten minute walk away on Stoke Hill, is the Stoke Arms, which also has BT and Sky Sports.

Otherwise, the ground is walkable from the city centre where there are plenty of pubs. Mike Faulkner from Somerset, recommends the Duke Of York and the Amber Rooms in Sidwell Street. Whilst Tony Fort recommends ‘The Victoria’ on Victoria Road (follow Victoria Street from the back of the Grandstand). As Tony says ‘You can park here (for free) but it is a good 10-15 minutes walk from the ground and steep! The pub is great, very “studenty”, but full of friendly Exeter supporters. Both the food and ale were excellent both from a quality and value perspective’. Whilst Mick Hubbard adds; ‘We walked on from the city centre towards the ground and, instead of following Old Tiverton Road which leads to the ground, we forked right, up Blackboy Road and stopped at the Bowling Green pub, which is about a quarter of a mile from the ground.  We enjoyed this pub very much – good beer (i.e. proper ale), comfortable and quite airy, very friendly (locals were hospitable and fans of both clubs mixed amicably) and a separate pool table for those so inclined. A definite recommendation’.

Leave the M5 at Junction 30 and follow signs for Exeter city centre along Sidmouth Road (A379) and then onto Rydon Lane (A3015). Take the Sidmouth Road turn off (B3183) towards the city centre. Keep going towards the town centre as the road becomes Heavitree Road. On nearing the city centre take the fourth exit at the large roundabout onto Western Way. At the next roundabout take the second exit onto Old Tiverton Road, then turn left into St James Road for the ground. There is no parking available for fans at the ground itself. There is street parking, but quite a way from the ground (about a mile) as there is a local residents scheme in operation. Just continue past the turning for the ground along Old Tiverton Road and at the roundabout (with the Stoke Arms above) take the third exit and then further down on the left you will be able to street park. It is then about a 15 minute walk to the stadium. There is also the option of renting a private driveway near St James’ Park via YourParkingSpace.co.uk.

The nearest railway station is St James Park, which is adjacent to the ground and only a short walk away, However this station is on a local line and most fans will arrive first into the mainline stations of Exeter St Davids or Exeter Central, from which you can then get a local train to St James Park.

Exeter Central is the closer of the two mainline stations is just under a mile away from the ground and should take around 20 minutes to walk. As you come out of the main station entrance, turn left and proceed along Queen Street. As the road bends around to the right, continue straight on along the pedestrianised area. At the end of this area (where it meets the High Street) turn left and then continue along Sidwell Street. After the roundabout turn left into St James’ Road for the ground.

The Club have made excellent progress with the building of a new 1,600 capacity stand, which has replaced the former old Grandstand that had stood since 1926. The new single tiered stand is all seated. Although fairly standard looking, it is going to be much larger than the present Grandstand and will afford better spectator facilities and better views of the playing action as it is supporting pillar free. Like its predecessor though it will not run the full length of the pitch, due to the very close proximity of a railway line, running behind this side of the ground. Half of the new Grandstand is due to open on  Saturday  October 27th, with the remainder in November. The photo below of the new Grandstand was taken in August 2018 and is courtesy of GL Events UK: The Club have also purchased a covered terrace from Barnet FC, which was in place at the North End at the Hive Stadium, before a new all seated stand was constructed. It is intended that this pre-fabricated stand will be erected at the St James’ Park End of the Exeter ground. Preparatory earthworks have commenced to put in place a foundation for the stand to sit on. Once the new Grandstand at St James’ Park End are completed the overall capacity of the ground will rise to 8,695, of which 3,715 will be seated.

Way, way back the Exeter stadium – or the land at least – was actually home to pigs, which gives a new dimension to the chant ‘your stadium is sh*t’. When Exeter moved in back in 1904 there were a few concerns raised that the plot wasn’t big enough to house a regulation sized pitch; that was soon resolved with the purchase of more land. Development of the stadium was extremely minimal with things like a roof addition to the Cowshed stand in 1926 the most noteworthy changes. That was the case until 2000 at least. As the millennium hit changes came rolling in. The Big Bank stand was transformed, the Cowshed was updated and turned to an all-seater stand. The Old Grandstand is the latest revamp that’s been seen; that was in 2019.

* These prices are for tickets purchased in advance of matchday (up to three hours before kick off). Tickets bought after the cut off point can cost up to £1 more.

Please note that proof of age/status maybe required for Over 65’s, Students and Under 18’s tickets.

Exeter vs Plymouth rivalry: It’s not a rivalry that springs to mind with the elitist football fans but the Exeter ground gets rocking when Plymouth come to town. Both clubs are located in Devon, which is the main source of their hatred. The two clubs were formed vaguely around the same time too so had plenty of early battles before coming into the league together at the same time as well.

Exeter vs Torquay rivalry: Exeter and Torquay only have 20 miles between them with both sides located in Devon. With few clubs in the county these matches are very much a local derby.

Special thanks to John Kanefsky for providing photos of the new St James’ Stand and Stagecoach and Adam Stansfield Stands.