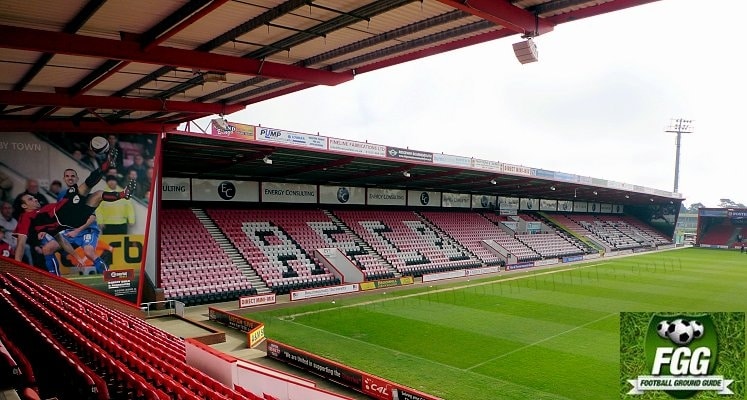 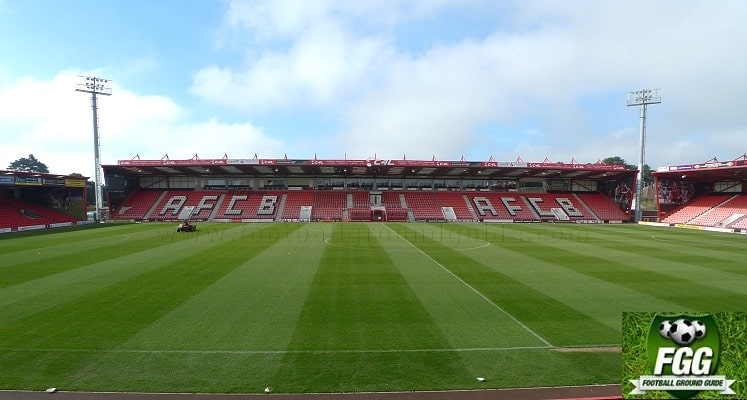 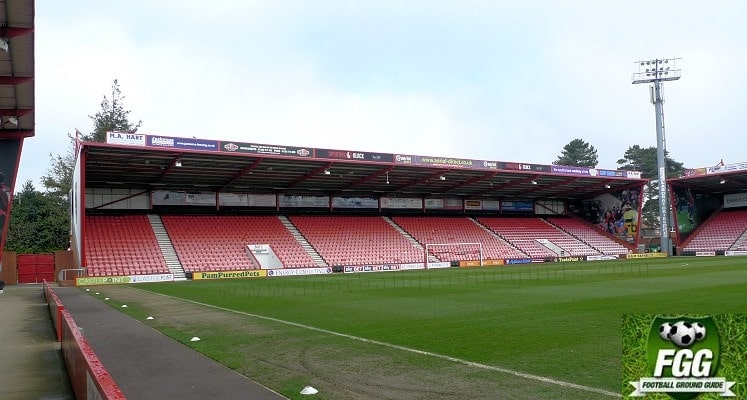 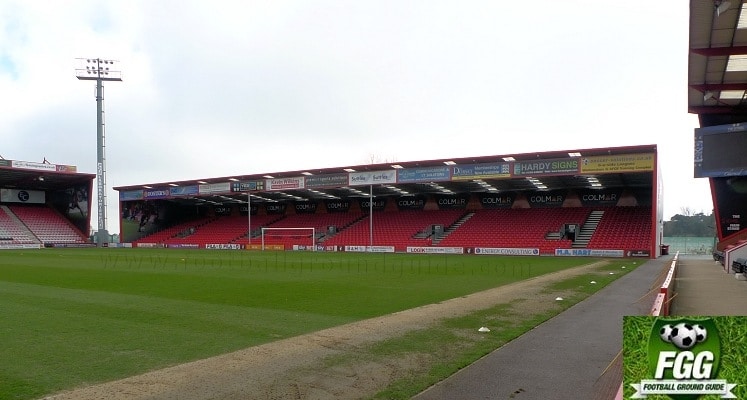 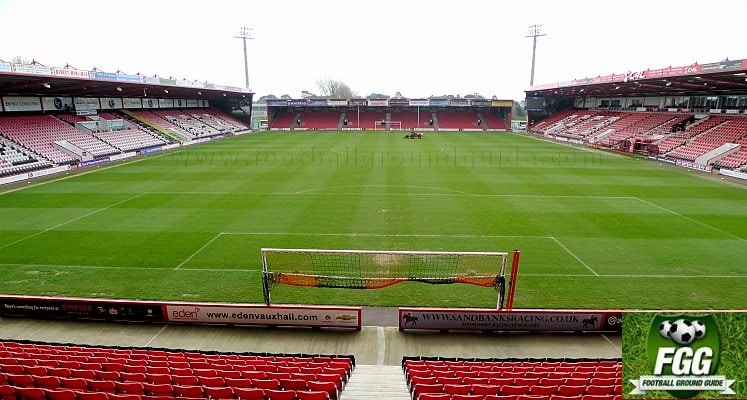 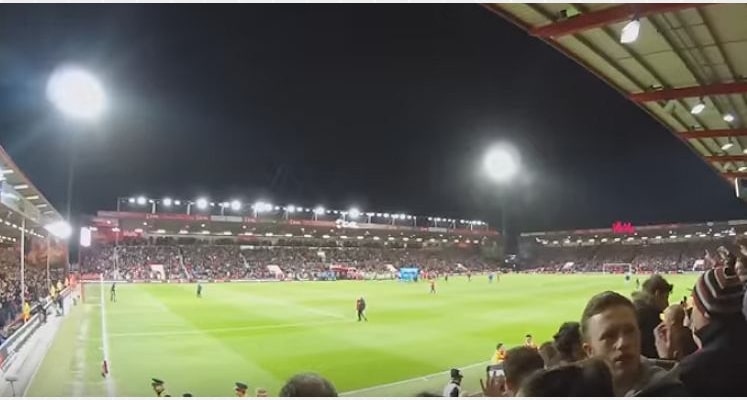 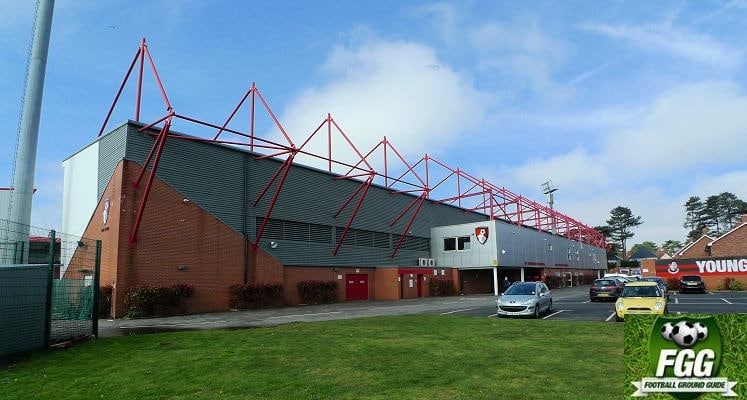 The Vitality Stadium has been greatly improved with the addition of the Ted MacDougall Stand at the South End of the ground. Although temporary in nature, the stand which is named after a former centre forward, fills what was an open end, making the ground four-sided. The stand itself was erected in the Summer of 2013 and looks quite impressive. Having a capacity of 2,400 seats it is of a decent size and is all seated. The only drawback is that it has a couple of supporting pillars at its front.

The rest of the stadium was literally built in 2001 in a matter of months. All three stands are of roughly the same design and height and are quite smart looking, with the Main Stand having a row of executive boxes to its rear. Each is a covered single tiered stand, with good views of the playing action with perspex windshields at each side. One nice touch is that the windshields to either sides of the stands have been brightened up with the addition of some huge player photos. The stand roofs have perspex panels allowing more light to reach the pitch. There is also a small video screen installed beneath the roof of the Main Stand towards the South End.

When the new stadium was built the pitch was rotated 90 degrees from its old position. So if you ever visited the old ground, try figuring out where the old Brighton Beach End was located! Originally known as Dean Court the ground was renamed the Vitality Stadium in 2015 under a three year corporate sponsorship deal. The stadium is completed with a set of unusual looking floodlights that are situated in the open corners.

For several years there was talk of Bournemouth moving to a new stadium; originally that was muted back in 2015. The club were supposed to move in ahead of the 2020/21 season but that hasn’t happened. Nor does it look like happening. The last sounds from the club was to place the new stadium on hold.

Away fans are located on one side of the Energy Consulting East Stand, which is situated at one side of the pitch. The normal allocation for this area is 1,500 seats, but this can be increased to 2,000 if required. The stand is shared with home supporters and offers a good view of the playing action. The facilities are okay and normally there is a good atmosphere. Please bear in mind though that if you have tickets for the lower rows in this stand, then at the beginning and towards the end of each season, the sun can shine quite brightly into this area, so make sure you bring your shades and a cap! For the bigger FA Cup games then visiting supporters are housed in the Ted MacDougall Stand at one end of the ground, which has a capacity of 2,150. I had a fairly relaxing visit to the stadium with no problems experienced.

Food on offer inside the ground includes a range of Pies which are ‘homemade’ at the Stadium; Steak and Ale, Chicken & Mushroom (all £3.50), Burger/Cheeseburgers (£4), and Hot Dogs (£4). Ian Holt a visiting Reading fan adds; ‘Compared to other grounds there is little in the way of burger vans outside the ground or in the vicinity of the stadium. Although inside the menu looked quite good only Steak & Ale Pies, Sausage Rolls or Hot Dogs were available when we visited’.

For night games in the build-up to kick off, the stadium puts on a short lights show. Which although entertaining, doesn’t really resemble a stadium light show as such, but more of a very large disco!

When Bournemouth were first formed their games were played on a field at Castlemain Avenue. A few years later they moved to a pitch on King’s Park. It didn’t take too long for the first real stadium to appear; it was nearby too. The club bought a plot of land that neighboured King’s Park and named it Dean Court. It was a modest start but a big step all the same. It remained like that until 1923 when the first real works to place; those works increased the capacity before roofing was added to South Stand some 13 years later. Future development followed a similar trend with capacity largely untouched and changes only things like the addition of roofs over terracing. In 2001, a major revamp took place though. The Bournemouth stadium was completely rebuilt and was, by and large, as it is today.

There is the 1910 Supporters Bar at the ground, but this is for home fans only. Similarly, the closest pub to the stadium, the Queens Park Hotel on Holdenhurst Road (alongside the A338 Wessex Way) also does not allow in away supporters.

Around a 10-15 minute walk away in nearby Boscombe is the Mello Mello Bar on Christchurch Road. Away fans are welcome at this pub as well as Baxters which is a little further down on the opposite side of the road. The Mello Mello Bar also has the added benefit of showing televised sport on a number of screens. Further along Christchurch Road opposite Pokesdown Railway Station is the Bell Inn, which welcomes visiting fans on matchdays. It too also has Sky Sports. Otherwise, it may be the case of drinking in Bournemouth Town Centre before the game, although it is around three miles away from the Vitality Stadium.

Alcohol is made available to visiting supporters inside the stadium, in the form of cans of John Smith’s Bitter or Fosters Lager (£3.50).

Follow the A338 towards Bournemouth. The ground is situated on the left of the A338 in the outskirts of town. You should be able to spot the tops of the ground floodlights on the left. Otherwise leave the A338 via the slip road which is signposted  Kings Park/Football traffic. You will then reach a small roundabout at which you take the second exit into Kings Park Drive. The entrance to the stadium and car park are down this road on the left.

There is a car park just to the south of the ground which of a good size and costs £1 on matchdays. However as you would expect that though it fills up pretty quickly So if you don’t get to the car park until at least 90 minutes before kick off you may end up disappointed. A ten minute walk across the park is Harewood College on Harewood Avenue (BH7 6NZ), which offers free matchday parking. It also has the advantage of giving relatively quick access back onto the A338, avoiding a lot of the traffic around the stadium (turn left out of the College entrance road onto Harewood Avenue, then left onto Petersfield Road, left onto Holdenhurst Avenue and then left once more onto Castle Lane East – A3060, which goes up to the A338). Some fans are also parking in Boscombe itself and walking to the ground. There is the Sovereign Shopping Centre on Christchurch Road which costs £2 for 4 hours.

The nearest train station is Pokesdown which is roughly a mile from the ground and is around a 15 minute walk away. However, most trains arrive at Bournemouth Central, which is around a half an hour walk to the ground. Either try to get a train to Pokesdown or grab a cab (£7-£8). If you do arrive at Pokesdown Station (which is served by trains from London Waterloo), then exit the station (there is only one exit) and turn right down the main Christchurch Road (A35). Proceed for about 400 metres and then turn right into Gloucester Road. Dean Court is located down the bottom of this road. Thanks to Andy Young for providing the directions from Pokesdown Station.

If you arrive at Bournemouth Central, then leave the station by the South exit, thereby facing an Asda Supermarket. Turn left and walk down to the main Holdenhurst Road. Turn left (going away from the town centre) and then keep straight on along Holdenhurst Road for around 25 minutes, reaching the Queens Park pub (recommended by this Guide). Continue straight on past the pub until you reach a roundabout at which you turn right into Kings Park Drive. The ground is down the bottom of this road on the left. Alternatively you can catch a Yellow Number 33 bus to the ground, normally a half hourly service. Come out of Station again by the South exit, facing Asda and turn left until you get to a Texaco Garage. There is a bus stop with shelter on the same side of the road. Ask the driver to be let off near Kings Park Drive. Please note that if you decide to use the same service coming back, take a yellow number 2 bus as this is a circular service’. Latest bus timetables can be accessed by visiting the Yellow Buses website. Thanks to Richard Barnes for supplying the directions from Bournemouth Central.


Away Fans
As per an agreement with all Premier League Clubs, away fans will be charged a maximum price of those shown below for all League games:

* Concessions apply to over 65’s, Under 16’s, and full time students (providing that NUS proof of student status can be shown).

Bournemouth are one of very few clubs that don’t really have a nailed on rival. Their main derby matches come against Portsmouth and Brighton but neither of those clubs lose much sleep over the Cherries. Why? Well, they have much bigger games to concern themselves with namely Southampton and Crystal Palace respectively.

The Awaydays video of Southampton fans at the Vitality Stadium Bournemouth was produced by the Ugly Inside and made publicly available via YouTube.