The Club have announced their intention to leave the Vitality Stadium and seek a site on which to build a new football ground. The Vitality Stadium or Dean Court as it was originally known, has been the home of the Cherries since 1910 and although the ground was completely re-built in 2001, with a capacity of under 12,000, then it is by far the smallest ground in the Premier League. The Club had been seeking permission to build a new stand at the South End of Dean Court, which would have raised the capacity to around 14,500, but still really this increased capacity is an inadequate figure for a top flight club. 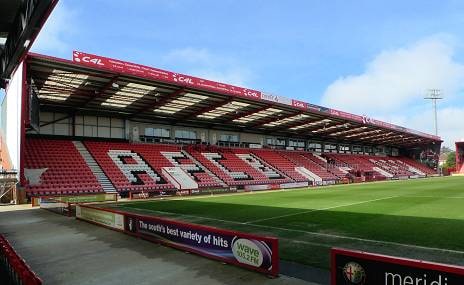 It is believed that the local council are not keen on seeing further expansion of the Vitality Stadium. Plus with the Club being tenants and not owning the Vitality Stadium, that leaves them at the mercy of their landlords. So for the Club to have a firm foundation and to to have a stadium worthy of Premier League status, then the Club have decided to look elsewhere. Ironically the Club at one time did own the stadium, but in 2005 when the Club were on the verge of going out of business, it was sold to a London Property Company AMD leased back.

The Club are now looking for a suitable site to build a stadium and it has been rumoured that land near to Bournemouth Airport has been looked at. Club Chief Executive Neill Blake has targeted the Club with being in a new stadium for the start of the 2020/21 season.

Photos of Dean Court before redevelopment