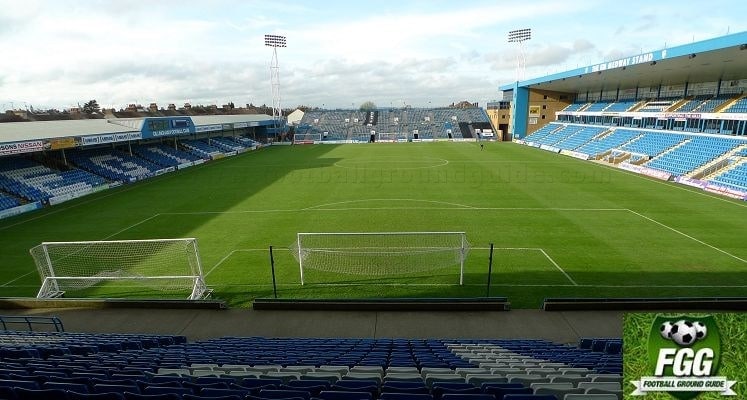 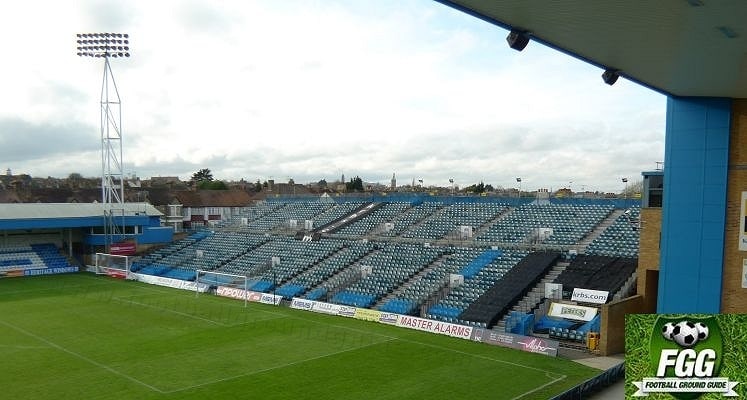 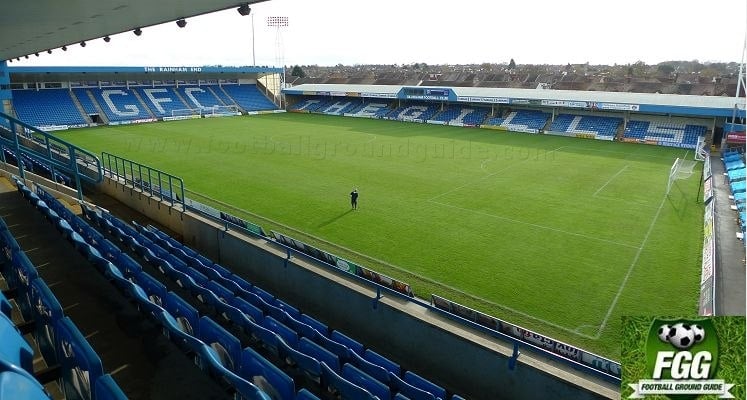 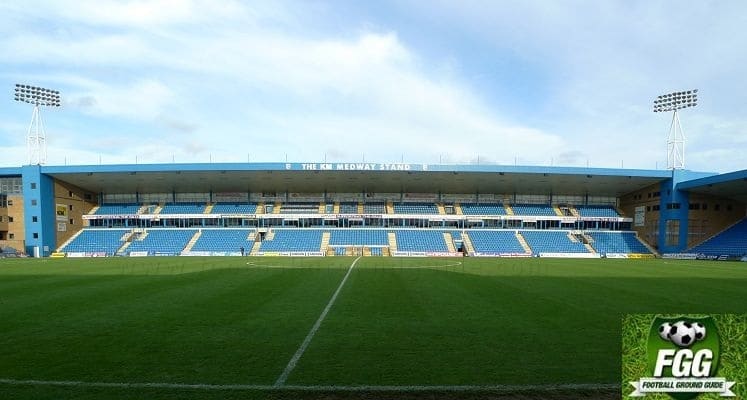 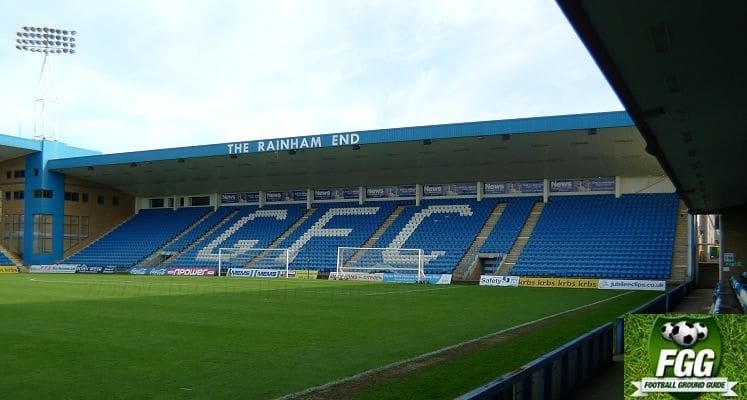 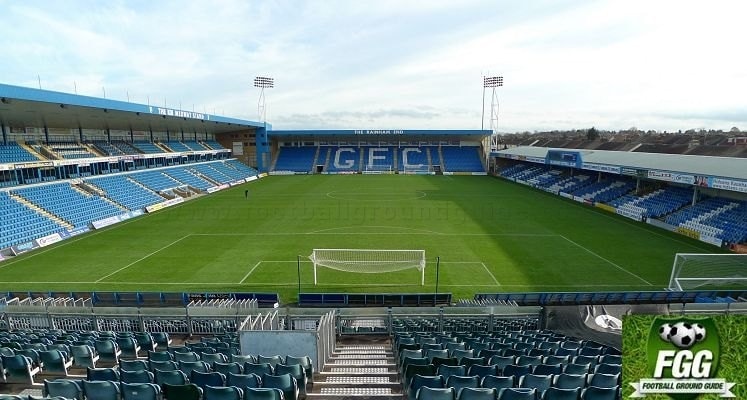 On one side of the ground is the impressive looking Medway Stand. Opened in 2000, it is two-tiered, with a large lower tier and a small upper tier. In-between these tiers are a row of executive boxes, which also have seating outside. Opposite is the Gordon Road Stand. Opened in 1997, this is a much smaller single tiered stand, which is partly covered (to the rear). It contains a number of supporting pillars running across the back of it, plus it also has an unusual looking TV gantry perched on its roof. The Rainham End was opened in 1999. It is a single tier cantilevered stand, which replaced a former terrace. Opposite is the Brian Moore Stand. This is, in fact, a temporary seated stand that has been situated on top of an existing terrace. When I say temporary (considering that it has been there since 2003) I mean that the stand can be easily dismantled and re-assembled. This is the only open area at the stadium. This stand is named in memory of the legendary commentator and lifelong Gills fan, Brian Moore.

Away fans are mostly housed on one side of the Brian Moore Stand (on the Medway Stand side) where around 1,500 supporters can be accommodated. This stand is of a temporary nature, so be prepared to meet a wall of scaffolding when you walk through the turnstiles.  Although home and away fans have their own turnstile entrances, once inside it is surprising that both sets of fans are able to freely mingle behind the Brian Moore Stand. This end is uncovered, so be prepared to get wet (although the Club does hand out free rain macs if the heavens open) and it is quite difficult to really create some atmosphere from this area. A better bet may be to head for one of the 200 covered seats that are made available to visiting supporters in the Gordon Road Stand. Although there is the odd supporting pillar at the back of the stand that could impede your view, it does have a roof, unlike the Brian Moore Stand. The stand itself is of a good size and height (you can get some great views of the surrounding area at the very top of it), plus the views of the playing action are fine. Unlike most temporary stands though the facilities are surprisingly good, being of a permanent nature behind the structure. Sometimes supporters in this area do try to make some noise by stamping on the metal rows of the stand.

One unusual aspect of visiting Priestfield Stadium is that away supporters have to walk down a very narrow terraced street to reach the away entrance, or if coming from adjacent streets down very tight alleyways. However, there is never normally any problems with this although after the game the Police sometimes close off some of the surrounding streets to keep fans apart.

Are there any exciting develops taking place right now? No. That doesn’t mean nothing is happening though; Gillingham took strides to make the MEMS Priestfield Stadium a cashless stadium in the summer of 2021. The new systems were in place ahead of the 2021/22 Football League season, with the first tickets going on sale in July.

The Club have re-announced their desire to move to a new stadium. Land near to the Club’s Beeching’s Cross training ground has been suggested by the Club as a possible new stadium site. The scheme which is being referred to as the Medway Village is dependant on obtaining a retail partner to provide finance into the scheme, plus getting the agreement of Medway Council. It is still very much at the feasibility stage. If the Club were to move then Priestfield would be re-developed for housing.

The Fleur De Lis pub on Gillingham Road, which is around a ten minute walk away from the Priestfield Stadium, has been designated by the local Police as an away fans pub. This pub shows Sky & BT Sports, has hot and cold snacks and is family friendly. To find this pub, then with away entrance behind you, walk down to the bottom of the street. Turn left and on reaching a roundabout (where the Livingstone Arms used to be and where there is a handy fish & chip shop) turn right onto Gillingham Road. The pub is up on the right. Otherwise, the ground is walkable from the town centre, where there are a fair few pubs to be found. Paul Kelly a visiting Preston fan adds; ‘we have used the ‘Will Adams’ in the town centre. The pub is in the CAMRA Good Beer Guide and does good cheap food. Plus a very friendly crowd of football locals happy to indulge in friendly banter – the landlord is a Gill fan too!’ Also located not far from the Will Adams on Skinner Street, is the small Past & Present micropub, which serves real ale and cider. Otherwise, alcohol is made available to away fans to buy inside the stadium.

Leave the M2 at Junction 4 and take the A278 towards Gillingham, going straight across two roundabouts. At the 3rd roundabout turn left onto the A2 towards Gillingham town centre. At the traffic light junction with the A231, turn right into Nelson Road and passing the small bus station take a right turn into Gillingham Road, the ground is down on your right.

Alternatively Roger Blackman provides an alternative route from the M2; ‘At the start of the M2 keep left and follow A289 towards Gillingham. Continue towards Gillingham and go through through the Medway Tunnel (Priestfield Stadium is signposted from here). Continue on the A289 ignoring the turn off for Gillingham town centre, until you reach the Strand roundabout after about a mile. Turn right at this roundabout and up the hill and over the level crossing. Take the second left past the level crossing into Linden Road and the ground is along this road on the right’.

There is a residents-only parking scheme in operation around Priestfield Stadium, so if you want to street park, this will mean driving a bit further away to do so. Chris Bell a visiting Northampton Town fan adds; ‘There is a cheap pay and display car park (£2.50 for four hours) on Railway Street near Gillingham station, which is less than 10 minutes walk from the ground’. Kieran a visiting Ipswich fan informs me; ‘I would 100% recommend parking at the Our Lady of Gillingham Church (Ingram Road, Gillingham ME7 1YL). I got there in good time and the lady on the gate charged us £3. Apart from being very helpful and welcoming, she informed us that once the car park is full the gate to the car park is closed and someone is always present throughout the match’. There is also the option of renting a private driveway near in the local area via YourParkingSpace.co.uk.

Priestfield Stadium is about a ten minute walk away from Gillingham Railway Station, which is served by trains from London Victoria (every 15mins), Charing Cross (every 30mins), St Pancras and Stratford International (both located on the same line, every 30mins). It is worth noting that the quickest trains leave from St Pancras (journey time around 45mins) and Stratford International (journey time 37mins).

Robert Donaldson provides the following directions; ‘Turn left out of the station and follow the road until you come to a crossroads. Go straight on into Priestfield Road. The visitors turnstiles are at the far end of Priestfield Road. Allow ten minutes to get from the station and into the ground’. To get to the home areas, turn right at the crossroads and then first left into Gordon Road for the Gillingham End Terrace home area, the Gordon Road Stand and the Rainham End. For the Medway Stand or an alternative route to the Rainham End, turn left at the crossroads and then first right. At the far end the road turns right and then left.

Robert Donaldson adds; ‘If you arrive by official coach the Police will escort the coach to a bus park, a ten minute walk from the ground. To get there, walk from the parking area to the main road, turn left and follow this road until you come to Gillingham Road. Turn right and follow this until you come to the crossroads mentioned above, only this time Priestfield Road is on the left’.

* These prices are for tickets bought in advance of matchday. Tickets bought on the day of the game can cost up to £2 more.

** Maximum of one free Under 12 per paying adult.

Gillingham vs Charlton Athletic rivalry: This rivalry all dates back to a time when Charlton tried to expand their fan following by tapping into the Gills area – namely fans in Kent. Charlton even reportedly tried to recruit fans outside Gillingham’s stadium during the 1994/95 season.

Gillingham vs Swindon rivalry: This rivalry started in 1979, when a Swindon fan ran into the pitch and knocked the referee out with a punch for handing Danny Westwood a red card. The return leg saw a tunnel fight, with Swindon’s coach ending up in the hospital, and two Gillingham players ending up in court. That sort of fire takes a long time to burn out.