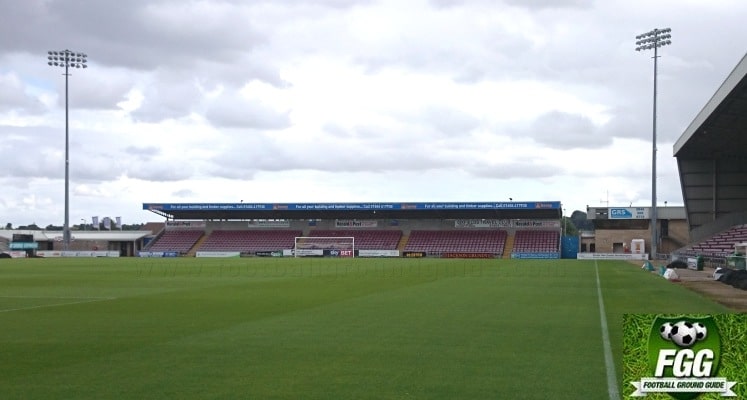 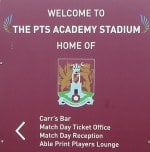 On one side is the new East Stand which was first opened to supporters in 2016, however, it still has works to be completed. This covered stand has a current capacity of 1,900 seats housed in a single tier.  The rest of the stand is still very much of a shell, with large areas above and behind the lower seating tier still to be put in place. It is hoped that when the building is completed it will house Executive Boxes and other Corporate facilities. On the other side of the ground is the large West (Main) Stand. This two-tiered affair is all seated and covered and is free of any supporting pillars. The team dugouts are located at the front of it.

Both ends are smaller stands and are of similar size to one another. Again both are all seated and covered. The South end of the stadium is allocated to away supporters. In the South East corner of the stadium, there is a large LED screen. A large hill overlooks the ground, where small numbers congregate to watch the game free, even though they can only see half the pitch!

In 2018 the Sixfields Stadium was renamed the PTS Academy Stadium in a five-year corporate sponsorship deal.

The Club moved from their old County Ground to then called Sixfields Stadium in October 1994. This all-seater stadium is located on the outskirts of Northampton.

For a long time the East Stand of Sixfields Stadium has been categorised as ‘in progress’. Now though that is edging closer to completion with the local council holding an option to buy the site for £1m – half of what they sold it to the club for in the first instance – should the build not be up to spec in five years time.

Away fans are located in the Moulton College Stand at one end of the pitch, where 800 supporters can be accommodated. If demand requires it then an additional 423 seats can be allocated in the East Stand. One slight pain about Sixfields is that you can’t pay at the turnstiles. You have to buy your ticket first from a small cabin and then you have to queue again. Some away fans have got caught out by this when arriving late. However, I have received a number of reports complementing the standard of stewarding, other club officials and the Northampton fans themselves. Please note that if your club has a large away following to make sure that you have a ticket before travelling as it has not been unknown for away fans turning up on the day, to find that the away section has sold out. Food on sale inside the ground includes; Cheeseburgers £4.40, Burgers £4.30, Hot Dogs £4.20, Various Pies £3.30, Cheese & Onion Pasties £3.30 and Jumbo Sausage Rolls £3.30.

Having lived in Northampton for a year and watched Northampton Town win the old fourth division (giving away my age now…), I have a soft spot for them. The fans themselves are quite passionate and this makes for a great atmosphere especially at cup games. Robert Dunkley informs me; ‘outside the West Stand there is a used programme stall stocking a wide range of programmes from different clubs and seasons.’ 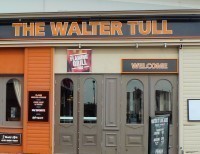 At Sixfields Stadium itself is Carrs Bar (the entrance to which is at the back of the Main Stand) which allows in away supporters. It also shows televised football. As Sixfields Stadium is built on a leisure complex on the outskirts of Northampton, then visiting fans on arrival are pretty much confined to the complex.  The nearest pub on the Sixfields Complex is the Sixfields Tavern, which is part of the Hungry Horse chain, so it offers food and is family friendly. It also contains a Sports Bar which shows Sky Sports, but it is primarily for home fans and bouncers man the entrance on matchdays. A better bet, just going past McDonalds towards the top end there is a Flaming Grill pub, called the Walter Tull, which offers real ale, serves food and shows televised sport. Behind the Flaming Grill is a Tenpin Bowling Alley which also has a bar and also shows televised sports. Nearer to the stadium there is a Frankie & Benny’s restaurant, which also serves alcohol. There are also a variety of other eating places nearby including a KFC, McDonalds and a Pizza Hut.

Carl Brown adds; ‘I found myself drinking in a T.G.I. Friday’s outlet opposite the Main Stand. Maybe not your stereotypical pre-match watering hole but very convenient for a drink, plus there were a wonderful array of fine waitresses on display, serving the goods!’

Kevin Roberts informs me; ‘For those supporters travelling from the North and leaving the M1 at Junction 16 and taking the A4500 towards Northampton, then you will pass on your left the recently refurbished Turnpike pub, which as far as I am aware is still welcoming away supporters’.

Kevin continues; ‘In Northampton town centre, there are several notable real ale pubs in addition to the usual Wetherspoons etc. A particular favourite for those looking for a decent pint is the Malt Shovel Tavern, which is possibly the best real ale pub in Northampton, having 14 hand pumps and is also listed in the CAMRA Good Beer Guide. To find this pub from the railway station, cross the road in front of the station and head towards the Carlsberg brewery (easily visible). You will find the pub located opposite the brewery. It is about a ten minute walk. It will probably take you a further 30 minutes to walk to the ground from here heading back in the same direction past the station (see ‘By Train’ below for walking directions)’. You can find out more about the pub on the Malt Shovel Tavern website.

Alcohol is made available to away fans inside the ground, from a small kiosk at the back of the stand, although it does serve some draught pints; Carlsberg (£4 Pint), Somersby Cider (£4 Pint), Carlsberg Export (£4.20 Pint), plus bottles of Black Sheep Bitter (£4.20), Kopparberg Cider (£4.20) and small bottles of wine (£4).

From The South
Leave the M1 at Junction 15A and take the A43 towards Northampton and you will come to the ground on your right.

From The North
Leave the M1 at Junction 16 and take the A45 towards Northampton and you will come to the ground on your right.

Sixfields stadium is well signposted around the area. There is a fair sized car park located at the ground, which costs £4. Make sure though that you arrive early as it has been known for it to get full for the more popular games. Parking in the nearby cinema and restaurant car parks is not allowed, and parking there will probably result in your car being given a £60 ticket! So make sure that you only use the official football parking provided at the ground. Near to the stadium, off the roundabout by TGI Fridays is a hard standing area, known as Duston Mill. On matchdays it is used as a car park, which is manned and costs £4 per car. There is also the option of renting a private driveway near in the local area via YourParkingSpace.co.uk.

Steve Riches adds; ‘If Northampton Saints rugby club are also at home at the same time as Northampton Town, then the parking can get critical as the Saints play just down the road, so allow extra time on those occasions.’

Northampton Railway Station is over two miles from the PTS Academy Stadium, so it is probably best to hire a taxi. To find the taxi tank then when you go through the ticket barriers keep to the left and go down the steps in front of Starbucks (there is also a lift if needed) to the ground floor go out of the doors. The taxi rank is across the road.

However, if you feel like braving the 25-30 minute walk then Paul Beckett provides the following directions; ‘After proceeding through the ticket barriers keep to the right passing W H Smiths. Go down the steps and at the bottom turn right onto the road. Keep going past the BP garage and at the lights, with the Thomas a Beckett pub on the opposite corner, turn left into St James Mill Road. Continue down to the traffic lights with Travis Perkins on the left and turn right into Harvey Reeves Road which becomes Edgar Mobbs Way. Continue on here until you come to the Sixfields Stadium. It brings you out at the away turnstiles.’

You can also get the Number 15 bus from outside the railway station as Paul Beckett advises; ‘To get to the Number 15 bus stop you come out of the main entrance onto the road (after going through the ticket barriers keep straight ahead at W.H Smiths and proceed down the steps) once out of this entrance walk straight ahead and the bus stop is 100 yards away. Make sure you go to the one across on the opposite side of the road but don’t cross the road until you get to the bus stop or preferably use the crossing at the traffic lights a few yards away from the bus stop. Don’t cross at the lights immediately outside the station. The Number 15 bus runs every 20 minutes and you should get off at the stop near ‘Bella Italia’ It is a very short walk to the Sixfields Stadium the away end being at the other side. Buses D1, D2 and D3 also stop here and run every hour respectively. The number 50 bus will take you to a stop opposite the away end but only runs every hour. The bus journey time is around 10-15 minutes. See the Stagecoach website for timetables.

Northampton first moved into Sixfields in 1994 with the ground undergoing expansion 20 years later. Before all of that though, the club had been long time tenants at Northampton County Cricket Ground. In reality though cricket grounds and football grounds don’t really work together as one venue hence the need to eventually move.

Concessions apply to over 65’s. Under 21’s can also be admitted at the concessionary price, providing that their ticket is bought prior to matchday.

* Please note that these prices are for tickets purchased prior to matchday. Tickets bought on the day of the game cost £2 more.

Northampton might be situated in the Midlands but with the fellow professional clubs in that region much bigger than them, their main locals rivals have long been Peterborough United. Over the years, these two sides – who can both vaguely be categorised as being based in the East of England – have come across one another many times in the lower leagues. With points regularly at stake and just an hour between them, it’s unsurprising that fireworks can fly on occasion.

As football clubs go, MK Dons are fairly new but that hasn’t stopped them building a rivalry with Northampton. The two clubs are just 30 minutes apart but with less water under the bridge compared to the Northampton vs Peterborough fixture. If the two end up in the same league for a few years though this rivalry has the potential to leapfrog the Northampton/Peterborough game for animosity.

Special thanks to Mike Cleave for providing photos of the West and Dave Bowen Stands and to Dave Hollands for the photo of the new East Stand.

Thanks also to Owen Pavey for providing the layout diagram of Sixfields Stadium.