The CNG Stadium has seen quite a sizeable investment in its facilities and this has continued into 2019 with two new terraces and a small seated stand being erected. These works have expanded the capacity of the stadium to 4,000 with 500 seats, which meets Football League standards.

On one side is the modern looking Main Stand, which is called the Greene King IPA Family Stand. This covered seated stand comprises six rows of seating and runs for around half the length of the pitch. The view is good from this area as there are no supporting pillars or floodlight pylons to hinder your view. On the roof of this stand is a platform for television cameras. On one side of this stand is a sizeable covered terrace that is taller than the Main Stand as was opened in April 2019. It is around 15 rows high and although pre-fabricated it is fairly steep. It gives this side of the ground a unique look. Unfortunately, this terrace does have the base of a floodlight pylon located near the middle of it and the roof only extends over the back rows.

Opposite is the Envirovent Stand, which is a covered terrace that is mostly free of supporting pillars, although it does have the bases of two floodlight pylons protruding through it. The team dug outs are located in front of this stand. On one side of this terrace (towards the 1919 Venue end of the ground) is a new small covered seated stand, which has around 150 seats in six rows. Again there is a base of a floodlight near the centre of this stand. At the Hospital End of the ground, a new covered terrace was opened in 2014, which is called the Henderson Stand. Although it has developed that area of the stadium, the terrace itself, although being practical, isn’t the most attractive of stands. At the other end, there is a small covered terrace that was also opened at Easter 2019. Although only four rows high it does have a roof and extends almost the full width of the pitch. An unusual feature is that around two thirds along this stand, almost in line with the 18 yard box, is the Player’s Tunnel, which can be extended outwards towards the pitch and retracted as needed. On one side of this terrace is the 1919 Clubhouse Venue Bar. The stadium has a set of six floodlights, three of which run down each side of the ground.

In the Summer of 2016, a new 3G artificial surface was installed at the CNG Stadium.

The Club have received planning permission to increase the capacity of the CNG Stadium to 5,000 and one that will meet Football League standards. This will be mostly achieved by extending the Main Stand towards the South End of the ground and increasing the amount of terrace on the Wetherby Road side and installing a new terrace at the South end itself. In addition, a new two storey clubhouse is to be built, which will include a corporate area on its upper floor.

Most matches at the CNG Stadium are segregated. Away fans are housed on the Wetherby Road side of the ground, in the Envirovent Stand. This stand is a covered terrace, that runs for around two-thirds of the length of the pitch. It is comprised of six steps and its low roof means that away can really make themselves heard. It has a capacity of 700. On one side of this stand is a small covered seated stand that comprises 150 seats, which is also given to away fans. Whilst on the other side of the Envirovent Stand towards the home end is an open standing area. Although these covered areas are free of supporting pillars, there are the bases of floodlight pylons present.

One of the highlights of visiting the CNG Stadium is the catering which is provided by a local company called Burgers & More. Not only do they offer a number of gourmet burgers (£4-£4.50) and Pies (£3), but also a tasty Beef Stew (£5) and the intriguingly named Wellington Burger (£5). The latter being more of a pastry which has a filling beef, blue cheese, garlic mushrooms and red wine gravy.  Certainly, a cut above catering at most grounds and that includes the Premier League! However can someone can confirm for me if this catering is available in the away section or whether it is different? Please email contact@footballgroundguide.com.

There is a Clubhouse bar inside the ground called the ‘Nineteen Nineteen Bar’ (1919 was the year that the Club was founded). However where matches are segregated, which seems to be most matches nowadays, then it does not allow in visiting fans. Otherwise, the nearest pub is the Woodlands, which is a short distance back down the A661 Wetherby Road, heading away from town. About a ten minute walk in the opposite direction along the Wetherby Road (heading towards the town centre and just set back from the roundabout is the Empress which also offers food.

If arriving by train then just off Platform 1 is the Harrogate Tap that has up to 11 real ales on offer.

Harrogate town centre is around a 20 minute walk away from the ground, where there are plenty of pubs to be found including the Winter Gardens on Royal Baths Road, which is a Wetherspoons outlet. Also on Cheltenham Crescent there is a small miropub called the Little Ale House.

Leave the A1(M) at Junction 47 and take the A59 towards Knaresborough. Then take the A658 towards Bradford/Harrogate. At the second roundabout turn right onto the A661 towards Harrogate. You will pass a Sainsburys and then after the lights with the Woodlands pub on one corner, then the entrance to the ground is just a bit further down on the right. Please note that traffic can be quite congested along the A661, so you may wish to allow more time for your journey.

Car Parking
There is no parking available for supporters at the ground and to make matters worse there is a residents only parking scheme in operation on roads close to the stadium. However, there is the nearby Kingswood Surgery on Wetherby Road (HG2 7SA) which offers parking at £5. Otherwise, you will need to street parking further away or in a town centre car park, around one mile away. I have been informed that the Sainsburys Store has free parking for up to three hours, but if using this please double check any signage in the car park to ensure that this is still the case.

Harrogate Railway Station is located just over a mile away from the ground. It is served by trains from Leeds and York.

Brian Scott informs me; ‘It is a pleasant 15-20 minute walk from Harrogate Railway Station to the ground. Exit the station on the East side (trains towards Leeds), go up a slight incline and turn right onto the main road. Cross this road at the pelican crossing and continue due South. Turn left at the roundabout into Station Avenue. Continue straight up this road crossing over at some point, until you come to a grassed area. Cross the A6040 at the pelican crossing and then turn left, passing public toilets on your right. Take the diagonal footpath across the park which is called “The Stray or Two Hundred Acre.” Turn right along Wetherby Road and the ground is on the left after about 400 yards passing the hospital on the left. It’s a busy road so best to use the pelican crossing’.

When Harrogate Town we’re first formed they played their games out of Starbeck Lane. Six years later they moved to their current home, Wetherby Road. Redevelopment was way down the list of priorities and no expansion of note took place until 1990 when the Main Stand was constructed. Another stand, the Hospital End stand, was built in 2014. 2020 saw the latest revamp; that was purely to meet football league standards after they won promotion from the conference.

Concessions apply to Over 65’s and Students (with valid ID).

Harrogate vs Bradford rivalry: Not so long ago this derby was no existent; there was simply too many tiers between the two for rivalry to feel necessary. Not anymore. No the two teams compete with each other for points the local bragging rights are also on the line; just 19 miles separate the two clubs with a simple trip up the A658 keeping them apart.

Map showing the location of the CNG Stadium In Harrogate

Unofficial Web Site: None at present

Special thanks to Robin Griffiths for providing the photos of the CNG Stadium Harrogate Town. 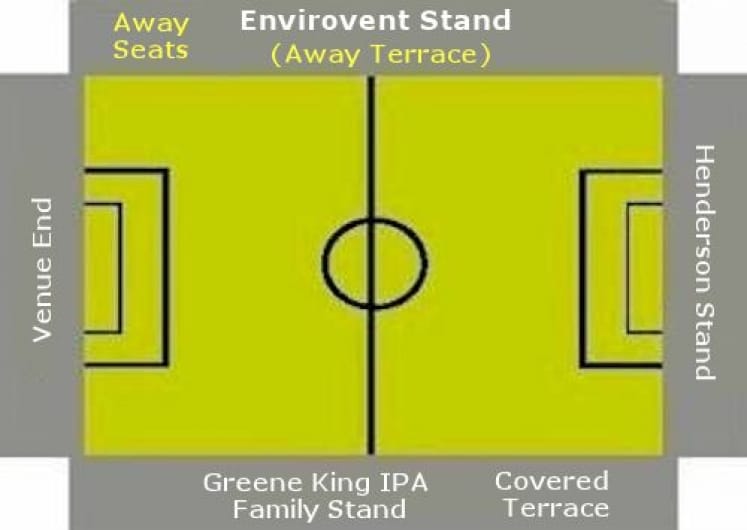