At one end of the ground is the newest and largest stand, the impressive looking Richard Donald Stand,  named after a former Club Chairman. It was opened in 1993 and replaced what was known as the Beach End. This is two tiered with a row of executive boxes running across the middle. There is a particularly large lower tier, with a smaller upper tier and overall this stand tends to dwarf the others around it. The other end is a much smaller older single tiered stand called the Merkland Stand. On one side is the old Main Stand, originally built in 1925. As you would expect from an older stand, it has a fair few supporting pillars running along the front of it. Opposite is a large single tiered cantilever stand, called the South Stand. The corner between this and the Merkland Stand is filled with seating, but this area is the only uncovered area of the ground.

The Club are to proceed with the building of a new 20,000 capacity stadium at an area called Kingsford, which is located to the West of Aberdeen, around seven miles from Pittodrie, after signing agreements with the local council. The stadium will be part of a wider £50m project for the area. Works have commenced with the first phase of the project which will see the building of a new Club Academy and training pitches. Works on the new stadium should commence towards the end of 2018, with the possibility of it being ready for the start of the 2022/23 season. Pittodrie is to be sold for housing development.

The artists impression above of the new stadium is shown courtesy of www.afc.co.uk.

Away fans are housed on the one side of the South Stand. Up to 4,500 supporters can be accommodated in this part of the ground (although the normal allocation is around 2,500). Peter Llewellyn adds 'there is normally an excellent atmosphere within Pittodrie, although it is sometimes lacking for the smaller games'. I think Pittodrie gets the vote as one of the most coldest grounds in Britain. Even in spring the biting breeze off the North Sea which is only a few hundred yards away from the perimeter of the ground, can go right through you. Outside look out for the granite entrance to the Merkland Family Stand. Erected in 1928 they celebrate Aberdeen being known as the 'Granite City.'

Scott McKenzie informs me; 'The away coaches are parked on the beach boulevard, which is close to a bar called the Saltoun which is popular with away fans. Otherwise what pubs there are near to the ground are for home fans only. Otherwise there are plenty of bars located in the city centre, which is about a 20 minute walk away.'

How To Get There By Car and Where To Park

The ground is located in the North part of the city (close to Old Aberdeen) and near to the coastline. It is close to the A956.

Follow the A90 towards Aberdeen. Just south of Aberdeen join the A956. Keep on the A956 through Aberdeen and eventually you will come to Pittodrie over on your right. Turn right into Pittodrie Street for the ground.

Follow the A956 into Aberdeen. You will reach Pittodrie over on your left. Turn left into Pittodrie Street for the ground.

Follow the A96 into Aberdeen. At the large roundabout with the A978 turn left into Machar Drive (A978). Proceed along the A978 and then turn right onto the A956 (King Street). Pittodrie Street and the ground is the 5th turning on the left.

There is a large car park at the ground but this is for pass holders only. There is though a fair amount of street parking in side streets and on the Esplanade along the sea front, which is on the other side of the golf course. There is also the option of renting a private driveway near the Pittodrie Stadium via YourParkingSpace.co.uk.

Aberdeen Railway Station is over two miles from the Pittodrie ground and is quite a walk (around 25-30 mins). Best to jump in a taxi up to the ground. However, if you want to brave the walk:

Upon leaving the station turn left and walk across the bridge and then turn right. This brings you onto Union Street, where you should walk down until its end, where you will reach Castle Gate. Home supporters should bear left into King Street (A956) and continue down this street before turning right into Merkland Road for the ground. Away supporters should proceed through the Castle Gate and into Park Street. This street eventually becomes Golf Road and you will come to Pittodrie on your left.

Thanks to Tom Widdows for providing the directions.

Please note that Under 18's and Under 12's tickets for the home areas will require proof of age ID to be shown on purchase.

Aberdeen Hotels - Find and Book Yours And Help Support This Website

If you require hotel accommodation in Aberdeen then first try a hotel booking service provided by Booking.com. They offer all types of accommodation to suit all tastes and pockets from; Budget Hotels, Traditional Bed & Breakfast establishments to Five Star Hotels and Serviced Apartments. Plus their booking system is straightforward and easy to use. Yes this site will earn a small commission if you book through them, but it will help towards the running costs of keeping this Guide going.

Although not local in distance, Glasgow Rangers.

26 wheelchair spaces are available in front of the Richard Donald & Merkland Road Stands, plus seven more in front of the away section. These also include provision for one helper per wheelchair space. Disabled fans are admitted free, although helpers are required to pay. Disabled toilet facilities are available in these stands. Places need to be booked in advance by calling 01224 650423.

The Club offer free tours of the stadium on either a Tuesday, Wednesday or Thursday. For further information and to book call the club on 01224 650 400.

Map showing the location of the Pittodrie Football Ground

Special thanks to Owen Pavey for providing the photos and ground plan of the Pittodrie Stadium in Aberdeen. 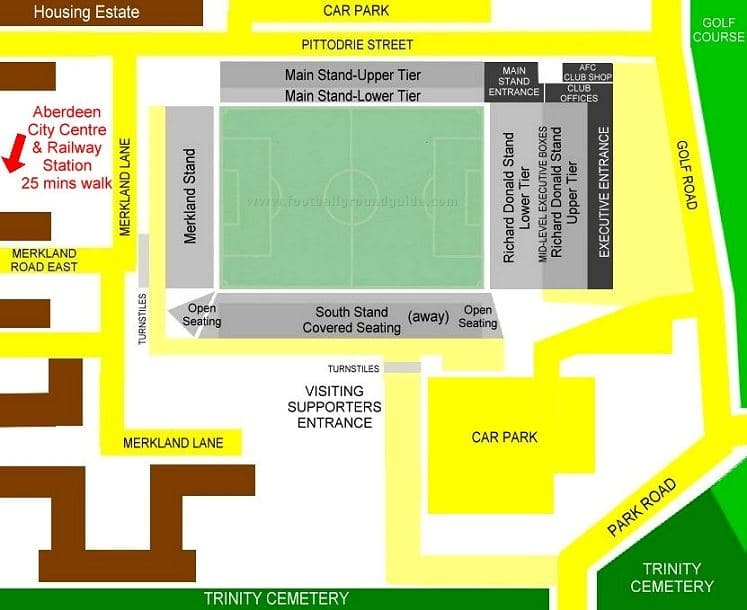