Mansfield Town hosts Sheffield Wednesday for their next engagement in the EFL Trophy group stages. Both teams come in the fixture on the back of defeats in their respective league fixtures.

Mansfield are having a dispiriting run in League Two, struggling for a win from the last nine matches in any competition. They lost to Harrogate 3-1 in their previous game of the EFL Trophy. On the other end, Sheffield will be in high spirit following the win in their opening game of group stage of the EFL Trophy. Mansfield will be eager to repeat the last meeting result against The Owls, where they took a 2-1 lead at home. But our pick for this match will be the visitors who have currently better results from their upcoming rivals and are likely to claim the points.

We have seen a huge number of goals when Mansfield and Sheffield faced each other. Both teams shared 13 goals in their three H2H meetings and all of these duels finished with over 2.5 goals. So it would be easy to expect at least three goals again in this match.

Sheffield has found the back of the net eight times in their last six matches while the Stags have scored only five goals in the same period and didn’t score more than one goal in any of those matches. But none of their H2H matches has ended without both teams scoring. Since we predicted the final result over 2.5 goals, we also see both teams being able on the scoring side with Sheffield having the lead.

The Yellows lost their last match against Barrow by conceding a goal from the penalty spot in the second half. Mansfield has recorded only two wins in the ten matches of League Two and the lack of wins put them twenty-second on the table. James Perch is injured while Stephen Quinn is facing red card suspension coming into this game.

The Owls dropped to the twelfth with their dramatic defeat of the last match against Oxford United. Sheffield kept the rivals to 1-1 till 90 minutes but Oxford grabbed the lead by scoring in stoppage time. The manager Darren Moore will have only one fitness concern, Lewis Gibson, for this match.

Top Betting Odds and Stats for Mansfield vs Sheffield Wednesday

FAQs regarding Mansfield vs Sheffield Wednesday Coverage and Accessibility 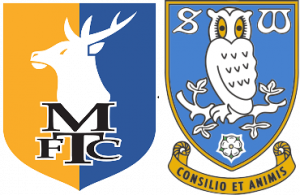