London is one of the important cities in the world of football. It has the unique situation of boasting more than 10 clubs and several large stadiums. Many of the clubs in London are professional and they play in the top leagues like the English Premier League and Championship.

Apart from housing the Wembley Stadium, which is the home of the England football team, London also has plenty of grounds with capacities exceeding 50,000 quite easily. In fact, the variety is so extensive that London could even host a World Cup if offered the chance. In fact, one would need the assistance of a London football ground map to get around these different grounds.

London does not exclusively have big grounds which can hold tens of thousands of spectators. Instead, there are also smaller grounds that add to the charm of the city even further. Many of these stadiums have an iconic location or have made their location iconic due to their presence.

The key stadiums in London would be:

The Wembley is the largest stadium in England. It has a capacity of 90,000. Apart from hosting games of the England national team, the Wembley is also the place where the FA Cup final and the final of many other cup competitions take place. The original Wembley ground did not have a similar capacity. However, a major renovation took place in the place of the old site – which makes it easier on the London football ground map – to open this new ground in 2007 at a cost of more than £1.2 billion today if adjusted for inflation. 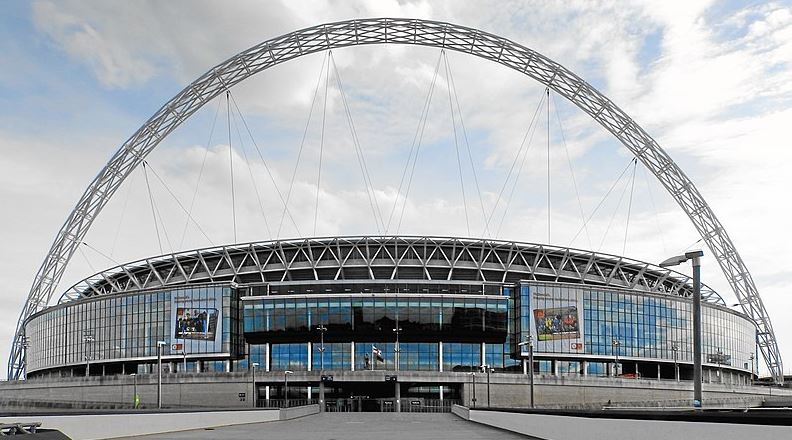 Tottenham spent a large part of their history at the White Hart Lane, but decided to move in 2019 to a brand-new stadium, which was not just capable of hosting football matches but also NFL games. This state of the art ground featured retractable and dividing pitches. The stadium boasts a capacity of more than 62,000 to make it the largest club football ground in London and it is only 2nd to the Wembley Stadium in terms of capacity.

Arsenal were one of the first London clubs to move to a 60,000+ seater stadium. Just like Tottenham, the club spent most of their time at the Highbury Stadium, which was done away with to increase the stadium capacity to 60,700+. The construction of the ground was completed in 2004 at a cost of more than £400 million. The Emirates Stadium has quickly become one of the signature destinations in London and it is located in Highbury district of the London football ground map.

Located in Stratford, the London Stadium was initially built for the Olympics 2012. However, it has now been used by West Ham in the Premier League. The multifaceted ground has a capacity that would range from 60,000 to even 80,000 depending on the event. It was opened in 2016 at a cost of more than £450 million.

Chelsea are one of the most successful clubs in England but their ground, Stamford Bridge, is not one of the largest around. In fact, it is not large even in London. The capacity of Stamford Bridge is just over 40,000 but there are extensive plans to redevelop the ground to hold 60,000 spectators. As one of the oldest grounds in London, Stamford Bridge has a lot of history. It was constructed in 1877. The ground is located near Hammersmith and Kensington part of London.

The Valley has been the ground of Charlton Athletic since the 1920s. It has a capacity of just over 27,000. The ground has undergone numerous expansions and renovations since it was initially constructed in 1919. Most of the expansion jobs have taken place since the inception of the Premier League in 1992. The East, West, and North stands have been rebuilt. The ground is situated between Greenwich and Woolwich regions of London.

Fulham play their football at Craven Cottage, which is one of the iconic sites in London. The ground is situated on the banks of the River Thames and it is located in the affluent SW6 postcode of the London football ground map. The name of the ground is not really surprising, as it was initially a cottage that was built in 1780. It later was transformed into a stadium in 1896 when Fulham decided to occupy. For more than 100 years, Fulham have been playing their games at this iconic location. Now, the capacity of Craven Cottage is not very huge as it can hold just under 20,000 fans.

Vicarage Road is the home of Watford and it comes with a history of almost 100 years. For the majority of its existence, Vicarage Road has been the home of Watford but it has also played this role to Wealdstone and Saracens for short periods. The ground has a capacity of just over 22,000 and it is located in Watford – making it among the furthest London grounds on this list.

The QPR home, Loftus Road, has been around since 1904. It is known for its hostile atmosphere due to the stands being close to the pitch. The capacity of the ground is just over 18,000. It is located in the W12 postcode of London football ground map.

Brentford used to play their football matches at Griffin Park. The location of this ground is in a residential area. Constructed in 1904, the ground was closed in 2019 in favour of the new Brentford Community Stadium. The new ground brings the capacity to just over 17,200. It was constructed at a cost of £17 million. The ground is quite close to the Kew Bridge tube station. Unlike the previous ground, Brentford have designed this new stadium in such a way that it is capable of hosting rugby and football matches.

Leyton Orient play their home matches at the Brisbane Road, which is located in the E10 postcode in the London football ground map. The ground is served very well by the Leyton tube station. It has a capacity of just over 9270. Built in 1937, the ground has been primarily occupied by Leyton Orient.

Wimbledon play their home matches at Plough Lane, which is a new ground which was opened only in 2020. The construction of the ground has taken almost a year. It is located in Wimbledon and it can be served by both the Haydons Road and Wimbledon Park stations. Wimbledon will also be sharing ground with the rugby league outfit London Broncos as part of the agreement to construct this new ground, which can hold 9215 fans.

Getting around between the different grounds

Due to the public transport options available in London, getting to these different grounds is not a huge challenge. Most of the stadiums are likely to be within a walking distance. If not, one can take the tube to reach the stadium without hassle. There is plenty of connectivity through buses, but tubes are preferred. There is no need to pick up additional tickets, as the Oyster transport card will be able to allow tube rides. There are plenty of apps available to plan the journeys while a London football ground map would also be helpful.