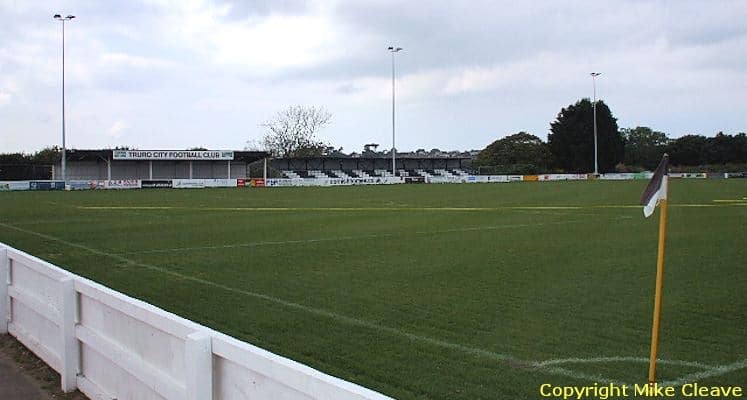 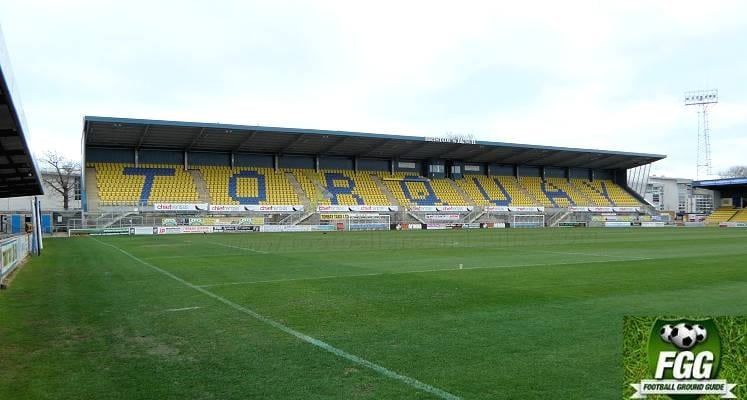 Treyew football is quite basic and a fairly open one. Apart from some temporary seated stands that have been put up (I guess in order to comply with League rules about the minimum number of seats that a Club must have) then the ground looks as if it hasn’t had any major investment for years. This is partly down to the Club’s ambition to build and move to a new stadium, the plans of which have been a long time in the making, but do now seem to be coming to fruition (see below).

On one side of the ground is a small temporary prefabricated stand that sits astride the half away line. It is covered and has four rows of seating, housing around two hundred fans. Although it doesn’t have any supporting pillars it does have the base of one floodlight pylon sitting in front of one part of it, which may obstruct your view. Next to it (towards the Clubhouse End) is a taller covered basic terrace, that has a number of supporting pillars running across its front. Both these stands are set well back from pitchside and have flat standing areas to either side. Opposite are two separate blocks of open temporary seating that are ten rows in height, both having a capacity of 500 seats. They are separated by a disused area, in front of which, either side of the half way line are the team dugouts. At the Clubhouse End, there is a portion of open terrace as well a number of white coloured club buildings that include the Club Bar. At the opposite end, there is again a rather small temporary seated stand that sits directly behind the goal. Although covered, it does have a number of supporting pillars running across its front. The team dressing rooms are located at the Clubhouse End, meaning that the teams come on to the pitch from one corner. The ground has a set of six small floodlights, three of which run down each side of the ground.

Truro City currently plays in the BetVictor Southern League Premier Division South. This is at Step 3 below the Football League and one League below the National Leagues North and South.

Truro City in conjunction with Cornish Pirates Rugby Football Club & Truro and Penwith College, are hoping to build a new 6,000 capacity stadium at Langarth Farm, which is situated around three miles to the West of Truro and Treyew Road, just off the A390. However, the eagerly awaited stadium is still yet to see any construction work, as the necessary finances have yet to be realised. In another development, Cornish Pirates Rugby Club have now taken over Truro City FC, which makes the viability of the new proposed stadium, more secure. The artist’s impression on the right, of how the new stadium will look is courtesy of the official Truro City FC website.

Truro City have had to vacate their Treyew Road ground as it has been sold to developers. They are hoping that a new stadium will be built in Truro (see below) that they can move into in the future. In the meantime, the Club have come to an agreement with Torquay United to share their Plainmoor ground. Torquay is located around 100 miles from Truro and will mean at least a four-hour return trip by car for supporters from Cornwall.

For more information about Plainmoor, including directions and pubs etc.. please visit the Torquay United page of this website.

Although Treyew Road has a number of temporary stands, it has a tidy and well looked after feel. Rarely if ever are fans segregated inside the ground, which is testimony to the normally warm welcome that awaits visiting supporters. As the ground is quite high up (giving from the club car park some great views over the city and its cathedral), it is quite exposed, so wrap up well in winter. As of course being in Cornwall, you will find locally produced pasties on offer at a cost of £3. As for most visiting teams this is the longest away trip of the season, then why not make a weekend of it?

There is a large clubhouse bar at the ground that welcomes away fans. The bar which also serves a number of real ales, enjoys views across the football ground. Chris Bennett adds;  ‘Truro is a great town for having a pint – particularly recommend is the Old Ale House (immediately adjacent to the city’s main bus station and listed in the CAMRA Goood Beer Guide), plus the William IV pub and Bunters’ Bar, situated opposite each other on Kenwyn Street. They’re all a fair walk from the ground but well worth a visit for any travelling fans who’ve made the long trip down to Truro’.

From the A38 going into Devon and Cornwall, take the A390 towards St Austell and then onto Truro. On entering Truro the road becomes the A39 for a while (towards Falmouth) and this road takes you around the outskirts of Truro. At the double mini-roundabout that is the junction between the A39/A390 go ‘straight-ahead’ onto the A390 in the direction of Redruth. The entrance to the ground is half a mile further along this road on the left.

There is a large car park at the ground which costs £1.

Truro Railway Station is located just over half a mile away from Treyew Road and is only a ten minute walk. It is served by trains from London Paddington. As you come out the main station entrance turn right and follow the road down to the roundabout, where there is a Sainsburys store on one side. Turn left at the roundabout onto Treyew Road. The entrance to the ground is further down on the right.

If you require hotel accommodation in Truro itself or the Cornwall area, then first try a hotel booking service provided by Booking.com. They offer all types of accommodation to suit all tastes and pockets from; Budget Hotels, Traditional Bed & Breakfast establishments to Five Star Hotels and Serviced Apartments. Plus their booking system is straightforward and easy to use. Just input the relevant dates and click on “Search” below or on the hotel of interest on the map to get more information. The map is centered on the football ground. However, you can drag the map around or click on +/- to reveal more hotels in the town centre or further afield.

Map Showing The Location Of Treyew Road in Truro

Special thanks to Russell Cox for providing the photos of the Treyew Road football ground. Visit his Wycombe Wanderer ground hopping blog.

Be the first to leave a review of Truro City!